The film lacks the pluck of Lagaan while retaining its hangover. 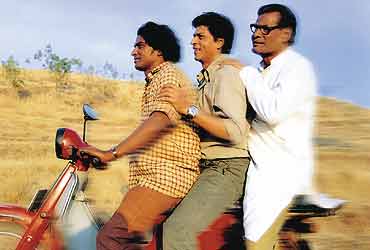 Lagaan was always going to be a tough act to follow. But Ashutosh Gowariker added to the expectations by making his next film on one of the biggest themes of our times: two Indias. The India that produces hi-tech marvels and the Bharat that sleeps hungry. But the film about reconciling two Indias ends up being many Swades's. The theme of a NASA scientist, Mohan Bhargava (Shahrukh Khan), returning to an Indian village and finding himself trying to uplift the villagers' lot has strong emotional resonance in a country where most youngsters nurse the America dream.

But then, it wanders into subplots about village life and school admissions before a Siddhartha-like awakening causes Bhargava to harness water to bring electricity to the village. Gowariker then pulls it back with a climax where tension between NASA and home plays out over Rahman's stirring title track. Gowariker's self-conscious treatise on development looks like a Doordarshan documentary made with Bharatbala's production values and Karan Johar-like emotions thrown in. The film lacks the pluck of Lagaan while retaining its hangover.

Why Small Is The New Big