Sunrise Is Back Home

An industrial graveyard once, West Bengal has re-emerged as the new investment destination 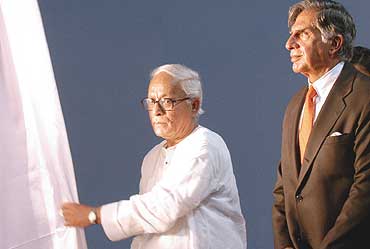 outlookindia.com
-0001-11-30T00:00:00+0553
"We are not fools to ignore the changes taking place in the world.... We are keenly studying China's policies and have learnt—Don't stick to dogmas; change with the times and learn from life," said West Bengal CM Buddhadeb Bhattacharya in a recent lecture in Singapore. By pursuing this philosophy, he has changed his state's fortunes. West Bengal's is, perhaps, the most spectacular turnaround story. From an industrial graveyard, a morass of economic stagnation, and embedded in a suicidal culture of militant unionism, the state has emerged, phoenix-like, as one that's attracting corporate attention, investments and praise. A once anti-industry state has managed to get corporates and policymakers to sing paeans to it.

Listen to some of these voices. "West Bengal has all it takes to emerge as a frontrunner," says Union minister of state for commerce Jairam Ramesh. Even leading industrialists are praising the state and its high-profile CM. "Every time I make a speech outside this city (Calcutta), I say fly to West Bengal, especially Calcutta," Udo Land, chairman, Flenders Ltd, said recently. Venugopal Dhoot, chairman, Videocon, who has invested here and wishes to expand his company's presence, feels the state is the nation's best investment destination and has the potential to emerge as the best in the world.

What's better, businessmen are putting their money where their mouths are. Bigwigs like Reliance (Mukesh Ambani group), Videocon, Tatas, Mitsubishi and IBM have decided to pump mega bucks into the state. In the past five years, around $500 million has been invested in several projects and the figure is likely to increase substantially over the next five. In fact, West Bengal is fast closing the gap with traditionally investor-friendly states like Maharashtra and Gujarat. A recent poll by the Calcutta-based Indian Chamber of Commerce (ICC) ranked West Bengal among the top three states with the most conducive industrial environment. This is far removed from the late 1990s when it was among the bottom three states in attracting domestic and foreign investments.

Obviously, the first step in this transformation is to have a leader who's charismatic, forceful and business-friendly. Buddhadeb fits the bill. He has successfully positioned West Bengal as a strong investment-conducive brand. The way he has embraced reforms—despite his party seniors often opposing them at the Centre—has been admirable. The determination with which he has restructured, closed or sold off state PSUs has encouraged investors. Over time, word slowly spread about West Bengal's progressive policies.

However, some people also give credit to former CM Jyoti Basu. The process of change, say old-time CPI(M) leaders, started in the mid-1990s during Basu's tenure. But it was an uphill task to first convince the party leaders and then the investors. "Only a person of his stature could have done it. What we're witnessing now is the result of that doggedness. That perseverance is paying off," explains ICC's secretary general Nazeeb Arif. But, unlike the 1990s, when many businessmen announced grand plans and did nothing, projects are taking off in Buddhadeb's reign.

Even Tamil Nadu was able to attract auto majors like Hyundai, Ford and Mitsubishi because of the hardselling by the state's politicians. A source close to these developments in the mid-1990s recounts how Union ministers like P. Chidambaram and the late Murasoli Maran pushed Tamil Nadu's case on a visit to South Korea and Japan. "The global chairman of one of the big automakers remarked that Chidambaram sounded more like Tamil Nadu's industry minister, rather than the country's commerce minister," he says. So, among all the major industrialised states in India, Tamil Nadu benefited the most from the attitude of parochial patriotism prevalent among most politicians and bureaucrats.

The next stage is to assure investors that the vision will be translated into reality and make them realise that there's an on-the-ground commitment cutting across the bureaucracy. Agrees a former CEO of an auto firm, "What companies look for is the state's commitment towards free enterprise. What they really expect is non-interference." The recent ICC poll also concluded that the reason for a thumbs-up by big business was the CM's ability to get things done on time. "The state government is receptive and clearances are fast," says Dhoot. "When CEOs meet the CM and the industry minister (Nirupam Sen), they feel encouraged and motivated to invest here," says Arif, who has facilitated several such meetings.

An example of how the state policymakers are willing to walk that extra mile to woo investors can be gauged by the land acquisition policy for Tata Motors' proposed Rs 1,000-crore project to manufacture small cars. In the case of this plant, planned to be set up over 700 acres in Singur Block (Hooghly district), the state government is prepared to pay 30 per cent premium over the prevailing market price to acquire agricultural land, apart from offering other incentives like alternative livelihoods and an attractive rehab package to the marginal farmers. It has also quickly put in place a new land acquisition policy that will make it easier for the state to do so. But the land is given to the corporates at lower prices.

Obviously, this is not enough. The corporates have to be convinced about the market's potential, both within the state and its proximity to others. Among Indian states, West Bengal is the third largest economy with a growth rate that's much above the national average. More importantly, the annual consumption expenditure was over $26 billion in 2004-05, which represented 7 per cent of the national figure, and is also growing at a rate that's faster than the national average. These are indicators that the state's economy is on an upswing.

What's more exciting for investors is the access they'll get to lucrative markets in east Asia. As Flenders' Land puts it: "I can service the whole of Asia sitting in Calcutta." But just the east Asian and India's neighbouring nations have a potential consumer base of 650 million people, whose purchasing power is increasing steadily. In addition, the Indian government's 'Look East' policy and the possibility of a free trade agreement with ASEAN countries will make Calcutta an ideal base to supply goods to that region. Growing trade relations with China—the opening up of the Nathula Pass is an indicator—and ambitious connectivity projects—like the proposed West Bengal-Myanmar-Thailand-Singapore expressway—will also help companies in the state to cater to east Asian and Chinese markets.

But then, there's no point in having markets if the companies can't manufacture goods or provide services at costs that are cheaper than other states. Here, too, West Bengal scores over most states. Land is cheaper, labour costs are low, the state provides several financial and tax incentives (on case-by-case basis, they are negotiable), power is cheap and the infrastructure is efficient. That's an attractive proposition for businesses. "In the case of the small car project, where costs are critical and margins are small, we can't go wrong on costs. That's why it made sense to opt for West Bengal. We hope to get power supply at a reasonable tariff and the labour is changing. These two factors—labour and power—are critical for our small car project," explains Ravi Kant, CEO, Tata Motors.

Or, consider why the software major Infosys is negotiating to build a 100-acre campus to house 3,000 engineers with a proposed investment of Rs 300-400 crore. The main component of the capital outlay in such cases is land and software firms invariably scout around for sites where it is cheaper. In this case, Infosys refused the project site at Rajarhat, the new residential-corporate landmark off Calcutta (like Gurgaon), as land prices were too high at over Rs 2 crore an acre. Immediately, the state government offered it land, just off Rajarhat, at a reported Rs 35-40 lakh per acre. That seemed reasonable, as the price was definitely much cheaper than most of the Tier-I cities.

For both Infosys and Tata Motors—as with others—it's labour that's critical. Historically, trade unions have been strong in West Bengal and had strong negotiating powers to regularly hike salaries and perks. Basu and Buddhadeb have changed that scenario. In fact, the current CM gave a clear warning to the state workers. As he said in the Singapore lecture: "Reform or you will perish. I am telling my workers—you have to change. If you fail to change, your company may fail." Adds Dhoot: "The situation is very different now. In the past few years, we have lost very few mandays on account of labour issues."

Gone are the old days of consistent and regular bandhs, lockouts and agitations. Don't forget that over one-fifth of iit students come from the state, and it had the second highest percentage of successful students (24.17 per cent) during the 2004 GATE exams, next only to Delhi (25.4 per cent). Today, you can get disciplined and qualified labour at much cheaper costs than other states. As Michael Stenberg, Denmark's ambassador to India, says, "West Bengal has more educated, qualified and English-speaking people available at a cost structure that's lower than the rest of India."

Not everyone is impressed by West Bengal's makeover. A CEO of an auto firm contends he would always be sceptical about setting up a manufacturing base there. A top Uttaranchal bureaucrat, whose state lost out in the race to woo Tata Motors, says corporates are being cajoled by the PM to assuage the Left, which is opposing reforms at the Centre. We'll have to wait to know whether Buddhadeb goes down into history books as the man who replaced the sickle with a gear (or a PC), or as a political failure, whose pro-business policies were rejected by the masses (a la Chandra Babu Naidu). As of now, his face is glowing red and his stature is growing. And he just won an election.

By Jaideep Mazumdar and Arindam Mukherjee with T.R. Vivek and Saumya Roy