What's it like for children of the poor in elite schools? Tough, but a dream chance. 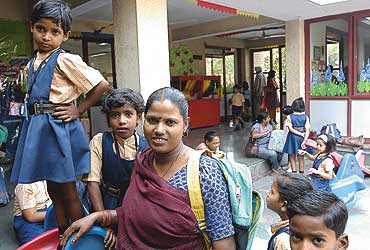 Much to his chagrin, political power-broker Amar Singh couldn’t get his kids into Delhi’s Sanskriti School. But Chandrama Singh, a canny Bihari who does minor electrical work, was luckier: thanks to a 2004 Delhi High Court order requiring all the capital’s private schools to reserve at least one in five seats for children of the poor. Last year, Chandrama, who lives in a slum colony behind Sanskriti called Sanjay Gandhi Basti, got his daughter Pratibha into the elite school on Delhi’s embassy row, packed with the kids of bureaucrats, politicians and professionals.

As their peppy six-year old, who has just graduated from nursery to prep, takes us through Red Riding Hood, in Hindi spiked with English, her parents listen, rapt. "In just one year, it’s all changed, the way she walks, talks, eats," says her mother Munni, who collects water in jerrycans for Pratibha’s morning bath, pays an istriwallah to iron her uniform every day and keeps a glossy stack of Parents’ Day pictures in her jhuggi. As I leave, a bunch of basti women, mistaking me for a Sanskriti rep, want to know: "When are you taking applications?"

Poor kids, rich schools. In Sanjay Gandhi Basti, they are frankly thrilled. But for all the noise about quality schooling for the ‘weaker sections’ and the arguments in favour of ‘economic criteria’, quotas for the poor are as controversial as caste-based reservations in the ‘authorised’ world of private schools—among proprietors, principals, teachers, fee-paying parents. Some private schools ignored the government directive that followed from the court order, among them leading Delhi schools that had wangled three- and four-acre plots of public land, at prices that would not fetch them a three-bedroom Delhi Development Authority flat, by promising to allot one-fourth of their seats to the poor. Others put in token ads offering freeships but turned deaf when NGOs came up with names. Or admitted poor kids, only to turf them out later. Some went to court, leading to a legal dispute over whether schools not built on cheap public land should follow the directive.

But a handful of schools have bitten the bullet and taken kids of cleaners, factory workers, domestic help and slum families into mainstream classrooms. Not as many as the courts stipulated, but many more than they have ever done. Lawyer Ashok Agarwal, who filed the PIL (on behalf of NGO Social Jurist) that led to the court’s intervention, estimates that about 30 private schools have admitted poor kids on freeships in the last year. Two elite establishments, Vasant Valley School and Shriram School (whose Parent Staff Association went against the tide by urging the school to embrace the policy), said they would admit poor kids from July. "A few schools are coming around to partly following the court’s order, but implementing this policy is going to be a long—and necessary—fight," says Agarwal.

And, even as the Centre seems to be backtracking on its own plan on quotas for "weaker sections" in private schools across the country, a committee of educationists led by NCERT director Prof Krishna Kumar has pushed the case for Delhi to play a pioneering role in creating more inclusive classrooms.

The committee, appointed by the state government on the high court’s directions, recommends that at least 25 per cent of the seats in all Delhi’s private schools—not just those that took cheap land—should be allotted to the poor to achieve a "critical mass" of poor children in each school. It asks for them to be taken only in nursery, KG and Class I, so that schools have time to plan and adjust, retrain teachers and rework curricula. Tapping into the wider policy debate on a school system in which kids study either in ghettos of poverty or of privilege, the committee points out that it is not just a question of cheap land: "Divisive schooling reinforces existing hierarchies and promotes in the educated sections of society an indifference towards the plight of the poor."

Words sure to raise hackles among some members of those very sections, even if the committee recommends that the state government foot the bill. There are many who believe afternoon classes for the poor, after the regular crowd has departed, should be as good as it gets. High-profile proprietresses hold forth on discipline problems, bad language and poor English: fee-paying mothers mutter darkly about head-lice and toilet manners, and complain, "The state wants to dump its burden on us and take away seats from our children."

The discipline and hygiene arguments are not just callous, but misplaced, say staff at schools that are trying to implement the court’s order with a measure of sincerity—if anything, most poor kids, and their parents, are rather too anxious to fit in. Poor English skills are a challenge, but not a crippling one, they say, especially when the kids join early, and despite the language impediment, many kids are doing well.

"The middle class seem to have forgotten where they came from. These children have a huge need to prove themselves and are eager to learn," says Rita Kaul, the principal of Heritage School in Vasant Kunj, which so far has 70 children on freeships among 900-odd students who pay Rs 3,000 a month to attend the centrally air-conditioned school. Apart from free tuition, the school’s management picks up the tab for books, day-trips, uniforms, and lunch. "We take care of what we can, to reduce discrimination. It’s the only way it can work," says Kaul. Six-year-olds, many from homes without running water,
in the Sanskriti splash pool,
as a guitar-strumming teacher takes lessons

"You can succeed, if you do it scientifically," says Amita Wattal, principal, Springdales School, Pusa Road, which has, for nearly three decades, cherrypicked 25 bright children from government schools and taken them in Class 6, underwriting their other needs too, from coaching and family counselling to spectacles and dental care. Today, many are well-placed professionals. The school has now also begun offering freeships to poor children at entry level.

But difficult questions do arise: can social integration really happen in schools that are bastions of privilege? Without playing with the psyche of poor children? "Academically, we can make it work, I have no doubts. But there are big emotional issues, when a child who has had tea and rusks for breakfast sits next to a child who’s come to school with a full stomach. No amount of counselling can take away the pain," believes Sanskriti’s principal, Gouri Ishwaran.

About 100 of Sanskriti’s 2,000 students are poor kids on freeships. While a big chunk came in last year at entry level in response to the government directive, there are also older kids, some admitted three to four years ago, on the school’s own initiative.

"It has been a sheer privilege, the most satisfying thing I’ve done in my career," says nursery teacher Prachi Behl, who sources swimsuits for her wards in Sarojini Nagar, translates report cards into Hindi, replaces mango shake with nimbupani in a home activity sheet (to avoid the use of blenders) and figures out how to explain jelly, jam and porridge to kids who have no idea what they are.

But there are issues that trouble the school’s counsellors: instances of pilfering, one by a fifth class student, whose poignant story, to her suspicious mother at home, was that the shiny stationery came from her "adopted mother" at school; that older poor kids tend to stick with each other at school; that very few poor kids get invited to the homes of fee-paying kids, and that those who do, cannot reciprocate.

It is tough, admits Leela, a domestic worker living in J.J. Bandhu camp in Vasant Kunj, whose daughter, a student of the nearby Bhatnagar International School, went for a sleepover to a schoolfriend’s place. "I love children, but how can I call them here?"

"We can say, hang socialisation, but can the kids hang it? And if it doesn’t happen, are we meeting our goals?" asks Sanskriti’s counsellor, Shivani, who believes strongly in the scheme, yet is troubled by the issues it throws up.
Says Madhu Suri, a social worker and teacher who coaches children from the J.J. Bandhu camp, and got 15 of them into neighbourhood private schools, "There are two kinds of pain—the pain of growing up in a jhuggi with little hope of change, and the pain of adjustment in studying with well-off kids in a private school. How do we know which is worse?"

And the children? Outlook spoke to a spectrum of kids across ages, and the sad, revealing verdict: studying in even a relatively caring elite school has its rough moments—being teased about poor English, never having money to buy at the canteen, or getting off a DTC bus and walking into the school gates past SUVs belonging to other kids. But it is finally a lot better than what came before.

Springdales alumnus Naveen Yadav, a 23-year-old who’s doing a degree in biotechnology at the Delhi School of Engineering, will end up being the only white-collar professional in his family. "Nobody from a government school can get where I can. It’s not just marks, but culture, knowledge, preparation for life," he says emphatically. "I’m not afraid to talk to the manager of a company."

Is it alienating, sometimes, to be so far ahead of his family? "No, it gives me a sense of responsibility. My sister’s and brother’s children will go to Springdales, I’ll make sure of that." The students who ridiculed Yogesh’s English helped him later
"because they realised I was good", says this Heritage School topper

Yogesh Kumar, son of a poor widow, who has topped Heritage School with 92.2 per cent in the CBSE Class 12 exams despite the handicap of a relatively weak English score, joined the school in Class 11. "I would never have got these marks had I stayed on at my government school. I would not have been supported the way I have been here." Was it hard to change schools? "Yes," says Yogesh, who even dropped out briefly because he couldn’t handle the change but is glad he went back: "The same students who teased me for my English in Class 11, helped me in Class 12. Because they realised I was a good student. It helps if you are good at something." "Today, he is a hero and a role model for the whole school," says his principal, exulting over his result.

From the same school, there’s Sagar Khatri, a 12-year-old, who would rather talk to me in English than Hindi, while his Jat Hindi-speaking parents try to follow, both proud of the speed of his English, and confused by it. More young adult than child, he explains how he spoke to his principal and got his younger brother into the school, even coaching him for the entrance test and filling in his application form. Sagar’s brother wasn’t allowed to sit in the final exam at the modest private school he was attending, because his unemployed father hadn’t paid the fees.

And then there are the nursery and prep kids, bending elbows and knees in unison, to a guitar-strumming teacher’s instructions, in a splash pool at the Sanskriti School. Oblivious to social divisions, revelling in their break from the May heat, and the sheer joy of being six years old, chattering in the same Hindi-English mixture as many of their richer peers, kids like these seem the best chance for fulfilling dreams of cutting through class in the classroom. But only if the adults will let those dreams come true.