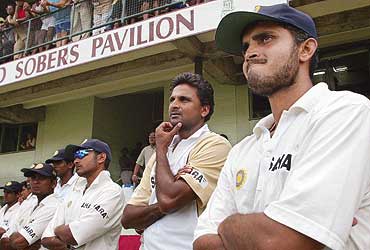 outlookindia.com
-0001-11-30T00:00:00+0553
Sachin Tendulkar was last out of the Indian dressing room at the Kensington Oval here. The last rites were over and done with, the Indian team had just crashed to an ignominious 10-wicket defeat to the West Indies in the third Test. Shuffling slowly down the stairs of the Gary Sobers Pavilion, he stayed behind the rest of his team-mates, head bowed as a tragic smile played itself out on his lips. Brian Lara, standing at the other end of the players' pool, watched intently. After what seemed an interminably long pause, Lara slowly walked up to the Indian star. He wrapped his left arm around Tendulkar and whispered a few words of consolation. It was a rare moment of empathy, from one great man to another.

For Tendulkar, the words of consolation from a man locked in a battle of greatness with him for the epithet of the world's best batsman possibly didn't mean much in India's moment of gloom. The latest batting debacle threw up the same contentious problems that continue to nag Indian cricket: unreliable openers, the much-hyped top order batsmen's inability to deliver when it matters, lack of genuine all-rounders and a competent wicketkeeper-batsman; and a tail that refuses to wag. "When will they learn?," asked an exasperated John Wright, the coach. "At the end of it all, the biggest issue we have on this tour is shot selection."

He's right. The Indians' old bogey of shot selection continues to haunt, even after all these years. Indians love to get their runs in fours, but meanwhile there is little effort from the top order to get the ones and twos: running between wickets remains at abysmal levels. A Lara gets his half-century from 67 balls with just three fours because he is looking to take a single after almost every delivery. The Indian batsmen, in contrast, seem hardly able to check their shots or find the gaps to keep the scoreboard ticking. Any opposition can pack the offside field and ask its bowlers to bowl wide of the off-stump—and he would get results against the Indians. Andy Blignaut did it against India in Harare and Carl Hooper acknowledged in public that he liked the way his bowlers kept bowling outside the offstump in India's two innings at Kensington. Former Test player and commentator Ravi Shastri is struck by the contrast in approach of the top batsmen of the two teams. "Lara and Hooper are naturally aggressive strokemakers. But they were still prepared to graft their runs here. They were willing to put a premium on their wickets. The difference in approach of the two teams is too stark."

Then there is the run-out malaise. As anyone associated with the game will tell you, this goes beyond just the judgement of a run. It conveys a lack of trust between the two batsmen at the crease. It also points to an almost selfish tendency to run one's own singles hard while taking it easy when it's the other's call. Coach Wright praised Shivnaraine Chanderpaul for his alacrity in the field, how he cleverly moved to catch Dravid and Wasim Jaffer short of their crease in India's two innings. What he didn't say was that the Indian batsmen were still not diving to make the crease. When a team has a tail which starts at No. 6, it's criminal to lose a topline batsman by way of a run out.

Meanwhile, the agonising search for a stable opening pair continues with mixed results. Shiv Sunder Das, in his short two-year 20-Test career, has had close to 10 partners at the start of the innings. The team management began with the noble idea of having a stable opening partnership and Sadagopan Ramesh was given an extended run even when it was obvious his heart wasn't quite there. Deep Dasgupta was seen as one to lend balance to the side, a soft choice for wicketkeeper who can bat a bit or the other way around. Now the wheel has come full circle and Jaffer, for all practical purposes, has booked his place in the side for some time to come.His compact half-century in the second innings promised much. Jaffer later revealed he was unsighted, couldn't see Chanderpaul rushing in since bowler Cameron Cuffy was blocking his vision.

And then there is the benign tail that doesn't sting at all. To be fair, too often the Indian tail-end has been criticised for its inability to hold its ground in a crisis. The lack of faith is pervasive: the tail-enders don't believe in themselves, neither do the seniors. Ganguly was petrified to see Javagal Srinath run to his end in India's first innings when the captain was not prepared to expose him to fast bowler Mervyn Dillon. Rightly so, since Srinath was out to the very next ball. With Ashish Nehra, Ganguly played with the intention of not letting the left-arm paceman face more than one ball. Insiders say Ganguly didn't think Nehra would last even a single ball! And when it comes to keepers, are Sameer Dighe and Vijay Dahiya in any way inferior to the indifferent Deep Dasgupta and Ajay Ratra?

The Barbados defeat also showed how typically brittle the Indian top order can get when the chips are down. Look at Tendulkar, Ganguly, Dravid and V.V.S. Laxman. For one innings of character, there are 10 others in which they look like rats abandoning ship. Nobody's forgetting what Laxman and Dravid did in the Calcutta Test against Australia, nor has one forgotten the fact that as many as eight Tendulkar hundreds have come in India's second innings. But one struggles to remember if Tendulkar has more than two hundreds when India has batted in the fourth innings, pressed as they have been to save, win or draw a Test.

The fact of the matter is: India has won matches in the past but very few by wickets, which conveys that any target for India in the fourth innings can test the fragile mental make-up of its top batsmen. A couple of things are obvious: Indian batsmen are not happy under pressure and they are unwilling to graft when the pitch is at its worst. You would dream to have a situation like the one in Trinidad when the West Indies were left to chase 318 in the fourth innings of the match and fell short by just 37 runs. A Shivnaraine Chanderpaul there is difficult to replicate in Indian terms.

Right now, the Indian bowlers are somewhat calling the shots. They shot out the Caribbeans for less than 300 in both innings in the Trinidad game and even in the Kensington Test, cut through the lower half to stop the hosts from going beyond 394. Two cheers then to Nehra, Khan and Srinath. The onus is now on the batsmen—to win, lose or draw the series.