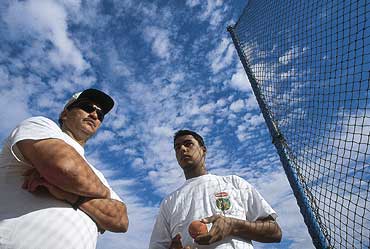 outlookindia.com
-0001-11-30T00:00:00+0553
Stuart Terence Binny, 17 years, pacer and batsman: Stu, as he's known on the field, resembles Binny Sr to the T—his sprint up to the wicket, the bowling action and the strokes that flow from his blade. In the India under-19 team already, he thinks "it's great to be the son of a former Test cricketer and wear the Indian cap." In the domestic season that led up to his national selection, Stuart shone with both bat and ball, taking 12 wickets and scoring 192 in three matches.And last year, as part of the under-17 team that won the Asia Cup, he was Man of the Match in India's semifinal win over Pakistan, scoring 50 not out and taking three wickets.

Roger reminisces that Stu was not even two when he was handed a bat bought in Australia. "He looked stylish with that bat, almost natural the way he held it and played the ball." There's been no looking back since then. Dining table conversations were always about cricket, son often turning to father for tips. "Having your father as coach is wonderful. Every evening, we talk about my game for half an hour. Even if I am on tour, he calls me. If I haven't scored even 10 runs or got wickets for a couple of matches, he watches me at the nets and tells me what's wrong," says Stuart.

Stuart's heroes are Mathew Hayden and Brett Lee. "Lee doesn't give up at all even if he's getting hammered and that's amazing. You need that spirit but not many Indians have it." Stuart's current objective is to be in the Indian team when it travels to South Africa for the World Cup in 2003.