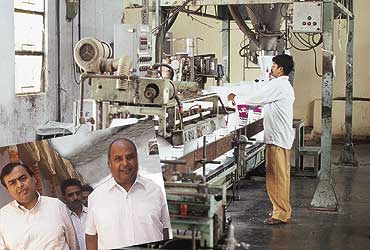 outlookindia.com
-0001-11-30T00:00:00+0553
It was third time lucky for both the government and Reliance Industries Ltd (RIL), though it would be difficult to say which one was more desperate and now, happier. But once the do-or-die acquisition of Indian Petrochemicals Corporation Ltd (IPCL) was through, Anil D. Ambani, MD, RIL, was reluctant to meet the press and announce that their bid—of Rs 1,491 crore or 26 per cent at Rs 231 per share, 74 per cent higher than the IPCL's last traded price—had actually gone through. "Let's get cracking right away," he said.

RIL had earlier lost the bids for VSNL (to Tatas) and IBP(to IOC). But petrochem is its core competence, and what better strategy for the leading national player than to acquire the second largest? With the book value of each IPCL share pegged at Rs 124-130 and the reserve price at Rs 131 a share, RIL's bid surprisingly wasn't only way above the other two bidders'—IOC and Nirma—but also the only one above the reserve price.

The Centre's grinning like the cat with the cream: the highest single transaction proceeds so far from PSU divestment, the IPCL sale has got over 12 per cent of the disinvestment target. Says Congress' Jairam Ramesh: "IPCL needs at least Rs 1,000 crore to modernise. The government couldn't have put in the money." Out of its 59.95 per cent equity in IPCL, 51 per cent will be offloaded in two phases. On May 23, RIL made an open offer at Rs 231 per share for 6,45,38,662 shares.

Has RIL emerged as a long-term winner? With IPCL, it'll enjoy a virtual monopoly in petrochem, sharpening its pricing edge in a scenario of high import tariffs and India's reluctance to deprotect its industry. The company now has five plants—its own at Patalganga and Hazira and IPCL's at Baroda, Nagothane and Gandhar. In tandem with the IPCL plants, Reliance will rationalise products to improve its dominant position in the polymer market, joining the ranks of global giants BP Amoco, Sabic and Borealis. Says an industry expert: "In IPCL, there was good strategic value for RIL. There's been a lot of cultural and human resource synergy between the two companies and a lot of current RIL staff are from the IPCL." Former IPCL CMD K.G. Ramanathan, for instance, was picked up by the patriarch when he retired and may return to his old seat.

IPCL, of course, profits more—and the stock market reflected that by pushing up its price after sale—from RIL's management strengths, consistent operational and financial performance, and strong finances. "RIL's acquisition of IPCL will also add value for both companies, and lead to significant benefits of scale, enhanced market leadership, integration, operational synergies, cost reduction and productivity gains," says Anil Ambani. To put it in stark numbers, RIL's petrochemicals production of 11.5 MT a year will rise by over 1.33 MT, annual sales may jump by Rs 5,200 crore, and it will add about 10 per cent to its Rs 580-billion turnover. Besides, it already has the world's largest paraxylene plant (and 98 per cent of the Indian market), sixth-largest polypropylene capacity and is the fourth-largest PTA maker.

Says a company official: "You buy for the future, not on the past. We are on an expansion path. We could either set up greenfield projects or take over existing ones and the IPCL was up for sale anyway. It would have taken close to Rs 5,000 crore and three years to build such a manufacturing capacity." Adds P.P. Bagchi, sector expert and former member of the Oil Coordination Committee: "IPCL's responsiveness to modern demands and systems was slack. Several of its plants are outdated and they need money for modernisation. They also did not have a proper chief executive since Ramanathan." Others agree that with IOC, IPCL would have remained a government company, when it needed to go private.

The Reliance top brass is chalking a blueprint to synergise IPCL operations under four macro heads: marketing, rationalisation of product pattern, financial restructuring and augmenting capacity. Says Ramanathan: "The main gain for IPCL would be integration of infrastructure and logistics, apart from access to capital. It'll also solve the problem of feedstock as RIL is a net producer of naphtha and gas. This will also mitigate its debt problems. Importantly, we can now think of an ethylene grid connecting the plants and petrochem producers."

But two questions remain unanswered. Did RIL pay too much? Says a Mumbai analyst: "RIL crackers use naphtha as raw material while 84 per cent of IPCL's capacity depends on natural gas as feedstock. Only a few IPCL products are used as raw material for RIL, and IPCL uses none of the other. There's no vertical integration." Second, will this acquisition allow RIL to abuse its monopoly? With a largely common portfolio, the average marketshare of the joint entity will now be close to 67 per cent, ranging from 38 per cent in polyester filament yarn to 98 per cent of paraxylene. For all products, save PFY and LAB, the combined entity will control over half the market, accounting for 70 per cent of India's petrochem assets. It'll have both naphtha- and gas-based crackers. With import tariff on such products averaging 30-35 per cent, sensitive pricing could impact the downstream plastic industry.

But even government officials, including disinvestment secretary Pradip Baijal, dismiss potential for foul play. "The Competition Bill in Parliament clearly says the government isn't against monopoly but its abuse. All petrochem items are in the OGL list and it's committed to reduce the tariffs," says Baijal. The Centre's track record, however, dampens such hopes. Moreover, says an IOC official, "Sinha has doubled the customs duty on PX in the budget." But, says RIL, "there's excess capacity in Southeast Asia and prices here are lower by $30-40 per tonne than in Europe and America. This will prevent any price manipulation." Adds Ramesh: "Import duties must come down to 10-12 per cent."

It's here that the high bid assumes significance. In petrochem, acquisition values are typically 8-10 times of projected earnings before interest, depreciation and tax (EBITDA). IPCL's EBITDA for the next 2-3 years was around Rs 1,000-1,200 crore per year and since the industry is in a recovery phase, it gives IPCL a valuation of Rs 9,900 crore with a net equity of Rs 6,120 crore. That's Rs 240 per share for 25 crore shares.

Jal Irani, consultant on Asian oil, gas and chemicals, agrees. The approaching boom in the petrochem cycle—the "desert rose" that blooms once in eight years—will help companies make more money in one year than in the past seven. The last bloom was in '95 and "the purchase is at more or less the bottom of the cycle. It could get huge cash flows over the next few years". Irani is bullish on the marketing and distribution synergies too. IPCL's polymer turnover is Rs 5,000 crore, and RIL's Rs 10,000 crore. "Every 1 per cent increase in the price (the import price differential is 10-11 per cent) on a turnover of Rs 15,000 crore will mean Rs 150 crore extra profit a year. Assuming they enjoy this dominance for five years, they could have bid Rs 40 per share more."

Irani feels that after the open offer, RIL can easily reach 51 per cent through the creeping-acquisition route. His guess is that Reliance can expand IPCL's capacity by spending a little over Rs 5,000 crore. "IPCL's borrowing cost is 13 per cent and RIL's 10 per cent. Even a 3 per cent saving on Rs 3,500-crore IPCL debt will add Rs 105 crore to its profits."

Will IPCL sap RIL's strength to bid aggressively for BPCL and HPCL? Irani argues that RIL generates Rs 5,000 crore operating cash flows every year and three years of that would take care of its IPCL obligations, with a comfortable debt-equity ratio of 0.6:1 and interest coverage ratio of 4.5. IOC, in turn, is down. "We are pursuing our dreams through organic growth and acquisition," says P. Sugavanam, director, finance, IOC. And negotiations with Haldia Petrochemicals. Arindam Mukherjee and Arijit Barman