Still a niche genre, graphic novels give space to fringe discourse. And find an audience. 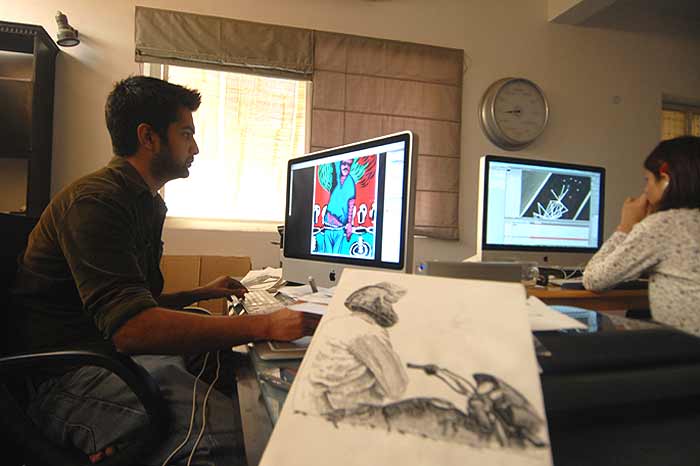 A crowd gathers in front of an electronic store to watch TV screens blare out the latest news on bomb blasts ripping through ‘Zamzamabad’, while Amitabh Kumar’s ‘Helmet Man’ looks on. The city is tense, phone lines become jammed, anxiety mounts, and soon after, a young man is arrested at the local barber shop. In another corner of the graphic novel universe, Malik Sajad, a Kashmiri artist, steps into a Delhi cyber cafe after blasts rock the city, and is immediately suspected of being a terrorist. The cafe’s customers surround him, demanding to see his “identity proof” while the owner calls the cops. Real life was rich research material!

As Indians get used to living with terror, navigating their lives around bomb blasts, and paranoia seeps into drawing-room conversations, several graphic novelists are exploring different facets of this “new normal”. “Visual literature”, according to graphic novelist Sarnath Banerjee, lends itself to an “emotional rather than informative” take on issues. “It is also not a mainstream medium. So it is easier to explore the subversive.” So when he turned publisher with Anindya Roy, he put his money behind two graphic novels that explored terrorism. While Kashmir Pending told the story of a reformed militant, The Believers was about two Muslim brothers, one who was secular and the other who heads a hardline religious group. Within both narratives, there was an attempt to explore the conditions that spawn terror—the global alienation of the Muslim community and the daily horrors and brutality in strife-torn Kashmir. With “Islamophobia” gripping the world, Banerjee believes that “it was not a risky proposition” to back these books. Roy says they felt these two stories to be the most interesting among the many proposals received by Phantomville, India’s first graphic novel publishing house.

The graphic novel in India is still a niche genre where “best-selling” titles like Banerjee’s Corridor have only sold about 6,000 copies. “Sales of graphic novels have not really increased over the past couple of years,” says R. Sivapriya, editor, Penguin. For example, Parasmita Singh’s The Hotel at the End of the World was published in 2009, priced at Rs 350, and opened to good reviews. It has sold just over 2,000 copies to date. In such a scenario, where the readership is so marginal, it is hard to judge what sells and what does not. However, thanks to the sheer potential of the medium and the media hype that surrounds it, the Indian graphic novel/comic book is evolving and has found a loyal following.

Most premises still look to mythology, but even contemporary realities like terror are receiving new play in the genre.

Most of the ideas and premises still veer towards mythology and historical action-dramas, but there is a bunch of graphic novelists trying to woo the new comic publishers on the block—such as Pop Culture Publishing, Vimanika, Campfire, Arkin Comics, Liquid Comics and Level 10—with ‘real’ stories. Bharath Murty, who has produced four Comix India anthologies for ‘short comics’, says he is tired of Indian comics that seek to “secularise Indian gods and turn them into Western-style heroes”. Instead, he searches for stories that do not look towards mythology for inspiration. Murty himself is busy working on his own graphic novel, The Vanishing Path, a non-fiction travelogue that explores the reasons behind Buddhism’s disappearance in India. Similarly, newly launched publishing house Manta Ray’s first graphic novel, Hush, takes on the sexual abuse of children while the soon-to-be-published Hyderabad Graphic Novel Project has philosophers and laymen time-travelling into Hyderabad’s past to relive rumours, legends and alternate histories. With contemporary realities finally finding a voice within the genre, it is not surprising when terror pops up as a subject matter repeatedly, in both nuanced ‘literary’ works as well as pulp fiction stories that revel in simplistic narratives.

Exploring the “other side” of the discourse is Malik Sajad’s non-fiction graphic novellas. Starting out his career as a political cartoonist, Malik began dabbling in the graphic novel medium to explore non-fiction narratives of his experiences in the Valley and outside. His work, mostly between five to 15 pages, shows how every Kashmiri is a constant, unrelenting target of suspicion, scrutiny and violence of the army and police. While his Identity Card and Terrorism of Peace, uploaded on his website www.kashmirblackandwhite.com, focus on his own experiences, Endangered Species, published by Penguin as part of the anthology Until My Freedom Has Come, draws parallels between the Hangul, the endangered Kashmir stag, and Kashmiris. Sajad’s soon-to-be-published Facebooked describes how Kashmiris are “picked up for questioning” if their online accounts evince even the tiniest trace of rebellion against the establishment. His novellas give you an immediate sense of what it is like to live in the Valley, where “encounter killings”, gunfire and police brutality puncture daily existence. “My work is about the other side of the story. Of what Kashmiris face, of how it feels to face paranoia and aggression everyday simply because we are Kashmiri.”

Terror-centric narratives are popular. This shows how easy it is to sell the ‘Big Brother’ State idea to a paranoid audience.

Bomb blasts, terror and its mirrored twin, state terror, also lie at the heart of Amitabh Kumar’s piece Helmet Man. Amitabh, an artist and self-confessed “comic book buff”, is one of the primary forces behind Pao Collective, an informal grouping of graphic novelists from India, who want to push the comic book medium here. Their book, The Pao Anthology, to be published by Penguin, will have a collection of contemporary stories, including Helmet Man. In it, Amitabh explores “terror, threat and power” in a story that unfolds in the aftermath of the bomb blasts in the fictional town of Zamzamabad. The plot revolves around a strange helmet that communicates with its wearer, who then becomes the eponymous Helmet Man. The monologue holding the piece together shows how terror can make anyone a victim and anyone the suspect, so long as certain things like location, time, religion and name click into place. Fellow Pao member Vishwajyoti Ghosh, who recently came out with Delhi Calm, which speaks of the oppression and terror unleashed by the state during the Emergency, will soon be “collecting multiple narratives of young voices from Kashmir and setting them in a graphic context”. The project, he says, has helped him realise and understand the scope of the problem and explore the larger issue in a visual format.

But besides these literary works, Indian pulp fiction comic books are also addressing terror, albeit through ‘black and white’ portrayals. “Till date, characters like Nagraj and Doga (from the Raj Comics stable) are constantly fighting terrorists with their state of the art machinery,” says Vishwajyoti. In two Raj Comic titles, 26/11 and Halla Bol, Nagraj and Doga battle fictitious Pakistani terrorist outfits and Somalian pirates, and even cross into Pakistan to destroy terrorist training camps. Reviews of these popular titles on discussion forums show that the only causes for discontent are why the plot allowed “Indian policemen to be killed” and why “revenge was not swifter and harsher”. Similarly, even newer characters like the teenage superheroes of Shaurya, in the comic magazine Jump, battle an international gang of terrorists. Shaurya also references the blasts in Mumbai, which is the starting point of all the action. “But we did not portray the sequence of events in the real blasts because we felt it was in bad taste,” says Suhas Sundar of Level 10, which brings out Jump.

There is an obvious thirst among the masses for such pulp fiction narratives that is reflective of the desire for swift retribution in the face of terror attacks. So it is not surprising then that Pop Publishing is investing quite a bit of money into their slickly produced spy-thriller graphic novel that is due to come out in December. It depicts how an Indian intelligence chief, in the aftermath of the deadly 26/11 attacks in Mumbai, plots and executes an operation to cripple the Pakistani establishment. The opening panels from the novel are eerily familiar; they describe a band of men who enter Mumbai by sea on rubber dinghies, clambering over the familiar tripod rocks at Marine Drive, to wreck havoc in the city. What comes after though is pure fiction. “It is an action-packed, espionage story that is simply gripping,” says Jatin Varma who heads Pop Culture Publishing. He claims the graphic novel is like Tom Clancy’s spy thrillers, and Humphrey Hawksley’s book Dragon Fire about nuclear war in the subcontinent. “It is purely for entertainment and should not be taken seriously at all,” he says.

However, these narratives—from both the vernacular and English comic industry in India—that target a mass audience reveal a troubling picture of the psyche of the average Indian who lives with terror for a constant companion. It shows how easy it is to sell to a paranoid public the idea of a beefed-up state surveillance system or setting up high-handed military, police and intelligence units, who will “take care” of terror by whatever means necessary—a classic case of terror feeding state-sponsored terror. So much better then that these lines of thought remain fictional, existing between the bindings of our books, rather than spilling over into our lives.