Bush may bask in its glow, but it was Clinton who set India Shining in US eyes, via chief architect Talbott 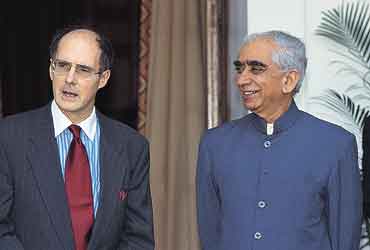 outlookindia.com
-0001-11-30T00:00:00+0553
It's established wisdom that of the two American political parties, the Republicans are more receptive to India than the Democrats. And that the Bush administration has propelled Indo-US ties to their current happy state. While Team Bush surely has taken big steps, the celebrated bloom today has its seeds in one man's far-sightedness and total engagement with India. He was a Democrat, a member of the Clinton administration and someone willing to listen more than lecture. Strobe Talbott, former deputy secretary of state, began a thoughtful dialogue with India following the 1998 Pokhran tests, exploring and understanding why India felt compelled to defy international opinion and shake the world with those blasts.

Talbott, who is now president of the Washington-based Brookings Institution, is about to tell the inside story in his book, Engaging India: Diplomacy, Democracy and the Bomb, expected to be published this spring. It's a firsthand account of the diplomatic drama that followed the nuclear tests as Indo-US relations plunged to their lowest level, the depths from which excavation seemed impossible at the time. Washington responded with deep anger, imposed strict sanctions and slammed the door shut in India's face. Other countries followed and India was isolated. When Pakistan conducted its own tests, the temperature in Washington rose to red-hot levels.

Talbott was a central character in those suspenseful days, crafting US policy and getting a crash course in subcontinental politics. Very few know the details of what transpired between Talbott and Jaswant Singh, former foreign minister, that from combatants they became comrades. The biggest question: what persuaded the US government to start talking?

The answers will be revealed just as soon as the State Department is through vetting the book. The manuscript is currently with the department's experts to ensure no forbidden information is revealed unwittingly. "It's standard procedure. My book is going through this entirely appropriate process and we hope to get it back in the near future," Talbott told Outlook. "Every official of the US government signs an agreement when he or she has access to classified information that they won't reveal it. Madeleine Albright's book went through the same procedure." But it hasn't stopped speculation that the delay might be due to party politics.

Engaging India will reveal the goings-on, the internal debates and discussions and the conflicting opinions that informed US policy on India and led to what became the 'Strategic Dialogue'. Talbott and Jaswant Singh conducted the dialogue over two years in seven countries and three continents. They met 14 times and discussed their vision for a cooperative relationship, rekindling from the ashes the light for the future. Once the teams met even on Christmas eve so as not to lose the momentum.

Talbott is clear that Indo-US relations wouldn't be where they are if it weren't for the intensive interaction. "I do feel it was the most sustained dialogue the two countries had ever had. We were able to probe more deeply into the fundamental dynamics of the relationship which had to do with Indian society and India-Pakistan relations," he said. The book also includes the parallel story of the dialogue with Pakistan. And yes, he does take sides on major issues as did Clinton when he read the riot act to then Pakistan premier Nawaz Sharif post Kargil.

Talbott, who has developed a deep interest in India, says if there is a hero in his book, it is Jaswant Singh. "He's one of the most impressive human beings I've ever met. His integrity is rock-solid. He always played straight with me and took me deep into the issues to get an accurate picture of the Indian position," he said.The two protagonists were able to celebrate at the end with Clinton's seminal visit to India even though they hadn't solved all issues.

In the end, Talbott credits his wife, Brooke Shearer, for creating an India interest section in him. Shearer lived in New Delhi in 1968 and stayed tuned ever since. The book, though, will make Talbott a certified 'Indiawallah' too.