For a soldier, losing limb is akin to losing life. Here's how they find another life. 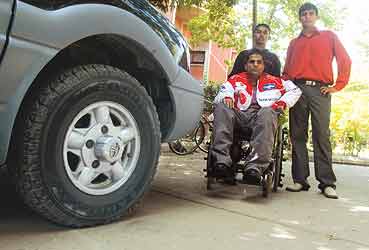 outlookindia.com
-0001-11-30T00:00:00+0553
In 2002 Naik Subedar Azgar Ali’s life suddenly turned into a nightmare. He lost his leg in a terrorist encounter in Srinagar. No amount of soldierly cheer could totally erase the shock—yet, you often don’t have the luxury of fighting psychological battles. Especially when questions of basic economics interrupt. Just when the fight for sustenance was getting unbearable, a door opened. He was contacted by the War Wounded Foundation (WWF). It invited the Indian Oil Corporation (IOC) to give him an outlet to sell lubricants. Today Ali brings in business to the tune of Rs 1 lakh every month for ioc and earns anywhere between Rs 7,000-9,000 per month.

It was to help those like Ali that the wwf was established in 2002. Currently, there are around 30,000 war-disabled in India who have had to leave the army. Besides, on an average, 1.5 soldiers get wounded in j&k and the Northeast everyday. "We want to help by generating business opportunities for them so that they can be rehabilitated," says Maj Gen (retd) Ian Cardozo, WWF vice-president. Cardozo and WWF president Lt Gen (retd) Vijay Oberoi have first-hand experience of the traumas of a wounded soldier. While Cardozo lost a leg during the Bangladesh war, Oberoi was disabled in the same fashion during a skirmish with Pakistani infiltrators in the 1965 war.

Cardozo says those incapacitated by the Kargil war have been attended to quite well; others injured earlier were not as lucky. "Through our organisation we want to reach out to these soldiers," says Cardozo. "Though we are open to Kargil casualties as well and those who were disabled fighting terrorism in J&K and the Northeast." At present, the WWF is processing 100 applications; 18 cases have been successfully settled. Pepsi, Apollo Tyres and IOC are the main corporate partners in this endeavour.

One more success story is that of Hawaldar Nawal Kishore, who lives and works in Tikari, Gaya. He lost his leg in a mine blast in Nagaland. With the wwf’s intervention, Kishore now sells Apollo Tyres and is able to make a profit of Rs 10,000-12,000 per month. The WWF also attends to cases of war widows and those disabled while training for the armed forces. Take Navin Gullia. Just a day before his passing-out parade at the Indian Military Academy, Dehradun in 1995, he broke his neck in an obstacle course. Gullia is paralysed neck down but after extensive physiotherapy is able to move his palms. Not one to mop around, he developed special gadgetry with which he could drive a car by using his palms. Gullia recently drove to the highest motorable road in the world—Marsimik La. The WWF approached Tata Motors who gave him a Safari for the expedition. He set out on September 10 and reached his destination on two days later.

Despite WWF’s efforts, it is not always able to reach out to many people. For instance, many war-disabled from earlier operations have are old and not interested in business ventures. Moreover, access is often difficult as some of them live in far-flung villages.

Another major issue is that very few soldiers have personal savings. The WWF can help secure loans at low rates of interest but often the soldier has to put in some amount, which is not always possible. "The soldier is usually hamstrung by the absence of substantial personal savings," says Cardozo. The disability pension given by the army is a pittance. For instance, if a jawan loses his leg below the knee, he gets only Rs 1,500 as pension. "Through our work we also aim to change these policies," says Oberoi. Contact WWF at: 2, Balbir Saxena Marg, Hauz Khas, New Delhi 110016; Mobile: 011-31022607; email: warwounded@indiatimes.com.