Story Of A Deal Before Its Time

A deal is cancelled to keep the PM in the clear. The why of it. 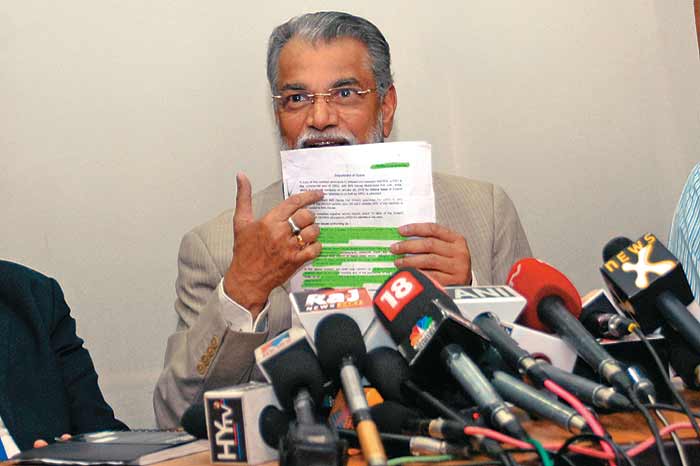 How S-Band Landed At PM’s Door

Did the PMO knowingly push the deal and then back out?

The PMO insists it got to know about the deal in July 2010, and then supported  moves to annul it.

There’s no loss to the exchequer yet. So why is the PMO on the defensive?

Space is part of the PM’s beat, leaving him vulnerable. Also, Devas’s untested technology was causing disquiet as it could potentially affect future plans of  existing telcos.

Even so, why did the PM need to clarify?

His personal integrity is coming under attack. Spotlight on 2G spectrum scam—and the proximity to the PM—worked against the deal. The PM had to clear the air.

Doesn’t seem to be one. The Antrix-Devas contract is legal and procedures were followed when it was signed in January ’05.

Why then was it cancelled?

The government is yet to give a concrete reason beyond “national needs” and “country’s strategic requirements”.

Is there nothing wrong in ISRO’s   dealings with Devas?

Some experts say the deal was loaded in Devas’s favour, with easy payment terms and a hedge against market risk. But then, there were no takers for S-band when the contract was signed.

Yes, of course, Devas will go to the courts. The government will have to change the Satcom policy and compensate.

Is the PM safe?

As long as no clear link emerges between his office and the deal.

Loaded with scientists and satellites, this is one hi-tech mystery many haven’t yet fathomed. In fact, 18 months after the first questions were raised about the Antrix-Devas transponder contract, no one has been able to put a finger on what exactly is wrong with the deal. Only one thing has struck home: that dreaded ‘S’ word, spectrum, has landed at the doorstep of Prime Minister Manmohan Singh. That’s perhaps the main reason Manmohan chose to subject himself to a “grilling” by TV editors this week, and the only time he has read out from a prepared statement during a hurriedly called press conference.  He was essentially clarifying his stand on what is being called the S-band scam.

Funnily, despite all the confusion—even before a committee set up to look into the 2005 deal could deliver, we now have a quick-fire annulment by the Cabinet Committee on Security (CCS)—the scam remains a mystery. Is there one at all? The government has been grappling for answers. It is still not quite clear on what grounds the deal between Antrix, the commercial arm of the Indian Space Research Organisation (ISRO), and Devas Multimedia was scrapped.

Union law minister Veerappa Moily points to changes in government policies on spectrum allocation and an increased demand for spectrum. That’s akin to annulling telecom licences given in the early 1990s because current market demographics and spectrum needs are totally different. Of course, there’s a difference. Unlike existing telecom service providers, Devas was yet to launch services as ISRO hadn’t yet put up the satellites—so it was easier to scrap the deal.

With the 2G telecom scam still fresh in people’s minds, there is the danger of a direct fallout on the prime minister, who holds the space portfolio. In its attempt to save face, the government has flailed about in all directions. Manmohan stressed at his press conference that the delay in annulling the deal was only procedural. Considering the deal has been in existence since January 2005, and the Space Commission decided to scrap it only in July 2010, obvious questions have been raised. How did the PMO, as it claims, not know about the deal a good five-and-a-half years after it was inked?

Devas seems to have got itself an advantageous deal. But when it did, no one else was interested in S-band.

ISRO claims to have ordered a review in 2009. Around this time, media reports about irregularities in the deal had surfaced. Yet, Antrix continued its talks with Devas on the project till a few weeks ago. “We were in talks with Antrix for hiring a third-country launch vehicle for the satellites till the third week of January,” Devas president & CEO Ramachandran Vishwanathan told Outlook. There are other apparent contradictions. While there are reports that the Space Commission and the Department of Space were kept in the dark, Antrix executive director K.R. Sridhara Murthi wrote to the Devas CEO in February 2, 2006, stating that it had “received the necessary approval for building, launching and leasing the capacity of S-band satellite....” A copy of the letter is with Outlook. Obviously, the approval would have come either from ISRO or the Space Commission or both.

So, what could have suddenly made the prime minister so vulnerable that he had to take defensive action, namely, the press conference? “Things have changed. All of a sudden, you find there are many takers and S-band is more valuable than ever thought,” say PMO sources. Indeed, Devas’s planned services could yield some answers. “Devas’s service through a satellite transponder would have been competitive with 4G. It could have been game-changer for the sector,” says Dinayar Contractor, a cable and satellite expert. This was seen as a potential spoiler for operators who have spent thousands of crores of rupees for 3G and BWA/LTE spectrum.

With India still in the pre-consultation stage for 4G services, Devas’s service could actually supersede many levels and render many of the existing companies’ investments redundant. Currently, a portion of S-band spectrum is being used for 4G terrestrial cellular services in some countries. “This could potentially happen in India as well, but not anytime soon. Widespread 4G services should be preceded by full-fledged 3G services, which is still in a nascent stage in India,” says a source close to ISRO.

Post facto, some experts have also pointed out that the deal was tilted in Devas’s favour with easy payment terms and minimum risks. Says the source close to ISRO: “A procurement deal disguised as a rental deal, with all advantages going to Devas and all disadvantages accruing to ISRO is, in a nutshell, what is wrong with the deal.” Such arguments would have added to the PMO’s discomfort with the deal. That said, the contention of a national loss is on loose ground. Says ISRO chairman K. Radhakrishnan: “We have not given spectrum or transponders to Devas or Antrix so far. It is important to know that there is no financial loss incurred by the government in this agreement so far.”

Legally, since the existing Satcom policy allows ISRO to negotiate with customers directly based on the market price, isro has done no wrong. Interestingly, in 2005, when Devas signed the contract, it was the only company seeking S-band transponders, although it is learnt that two other groups—Reliance Industries and the Zee group—had applied for S-band transponders along with Devas in 2003, but eventually backed out. Outlook could not verify this because its queries to both groups on this matter remain unanswered.

For now, the government has to deal with the repercussions. Says a PMO official: “It’s a formal contract which cannot be just thrown away. It has not only legal and commercial implications but is also important for international commitment.” As expected, Devas has threatened to take legal action. But then, anything can be justified in the name of India’s “social and strategic needs”—especially if the prime minister’s reputation is at risk.

By Arindam Mukherjee and Lola Nayar with Sugata Srinivasaraju in Bangalore