Storm On The Red Sea

The CPI(M) has a fight on its hands, and one of its own making. Has the party lost its moorings? 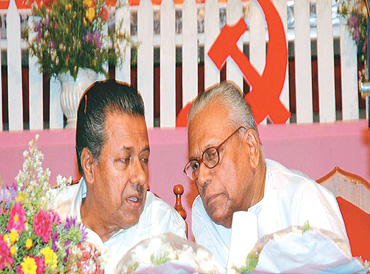 In 2004, the CPI(M)-led Left parties had a dream run, touching an all-time high of 62 Lok Sabha seats across six states: this included 35 out of 42 in West Bengal and 18 out of 20 in Kerala. The results—especially from Kerala—had, at the time, taken even the Left parties by surprise. Now, with just two months left for the next general elections, the CPI(M) is facing a serious crisis of credibility in these two bastions, even as it is engaged at the national level in trying to build an anti-Congress, anti-BJP third alternative. If in Bengal, the party's inept experiments at industrialisation have alienated its minority base, in Kerala, factionalism has lent an edge to a major scam involving the party's state boss, giving the Opposition a field day.

Indeed, in Kerala, the CPI(M) leadership is trying hard to dismiss the CBI's request to prosecute state party secretary Pinarayi Vijayan, calling it "politically motivated". Pinarayi is an accused in the SNC-Lavalin power scam from his days as power minister in the E.K Nayanar government from 1996-2001. The CPI(M) points out that after a vigilance inquiry initiated by the UDF government yielded nothing, the then Congress CM Oommen Chandy had in 2006—on the eve of the assembly elections—asked the CBI to step in. In the elections that followed, the LDF came back to power, thus proving (they say) that the attempt to corner the Left had been rejected by the people. CPI(M) leaders add that with polls around the corner, the Congress—with help from its government at the Centre—is trying to resurrect the case.