Pillars of the state in a blood feud. The symptoms are dire. 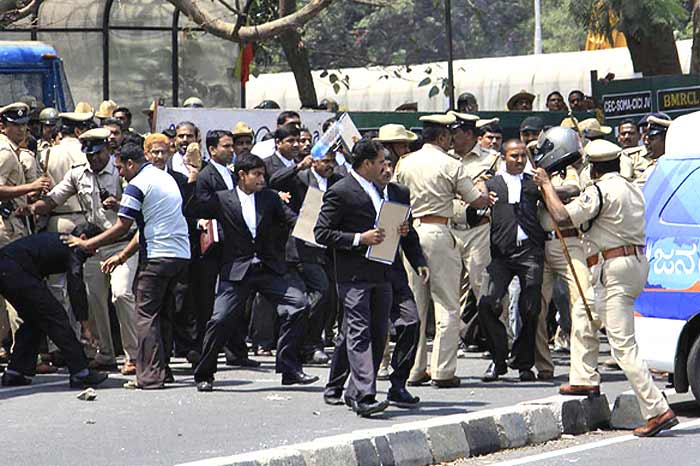 Lawyers, the media, the police. These three important, though not-beyond-reproach, sections of society are at war with each other in Karnataka. Sadly, there aren’t any sober voices to bring about a reconciliation. The mistrust runs deep, members of each section think any truce can only be temporary.

It all started on March 2, when television crews covering the appearance of mining baron Janardhana Reddy before the CBI court were attacked by lawyers. The attack was unprovoked, but certainly not without a history. It is said the media personnel retaliated, and while all this was happening, the police stood by—until they were caught in the middle, whereupon they brutally beat up the lawyers with lathis. Versions vary, depending on who you are speaking to. By all accounts, lawyers, media personnel and policemen fought for more than a couple of hours at the Bangalore city civil courts complex. In the melee, a judge, 15 policemen and ten media personnel were injured, a dozen motorbikes were burnt and some 40 cars vandalised.

“The media may criticise lawyers, but we should also train our staff in the discipline and ethics of the profession..”
Gangadhar Mudaliar, President, KUWJ

What stoked the flames was the round-the-clock coverage of the violence by TV news channels and the incendiary headlines and reports that appeared in many newspapers. Some just spread rumours—that lawyers had killed a constable, that a constable’s eye was gouged out. On the day of the fight, instead of providing reportage, regional TV channels went about defending themselves. Injured staffers spoke their version of the story, adding invective and vituperation. Visuals of the violence were replayed endlessly. On their part, advocates accused the media of launching a virulent attack on them and also of provoking police by “planting rumours”. Newspapers did nothing to bring fairness to the coverage: in most headlines, lawyers were called “goons”, “rowdies” and even “terrorists”.

The Advocates Association of Bangalore saw this as an unfair example of the media’s use of intemperate language. So on March 5, they obtained an injunction from court against the “language of hatred and provocation”. They boycotted courts and peace talks called by the administration, demanding the removal of the DG and IG of police, as also the police commissioner. They have also decided not to take up any media-related cases and want the chief justice of India and the CBI to investigate.

With positions hardening, senior counsel Pramila Nesargi told Outlook, “In the current context, the media has inadvertently eroded its credibility by its blackout of the other side of the story. By not giving voice to the lawyers’ perspective, it has done disservice to itself. I wonder if the media has allowed its power to go to its head and forgotten its fundamental premise and charter. Nobody is exonerating the wrong-doings of a few black sheep among the lawyers. But both sides have to show maturity.”

“The credibility of the media has been eroded by its blackout of the other side of the story. It has done itself a disservice.”
Pramila Nesargi, Senior advocate

Gangadhar Mudaliar, president of the Karnataka Union for Working Journalists, tried to be balanced: “The print media has been covering the courts for decades. This problem has started only after the proliferation of TV channels. Media presence has grown, but the court halls have remained small. This has often led to problems. As much as we criticise the lawyers, we should also train our professionals and teach them discipline and ethics. We have to urgently draft a code of conduct for television journalists. The lawyers may speak a language of boycott, but we can’t speak that language. They may attack. We can’t attack. We only want a peaceful work atmosphere.”

There are many conspiracy theories doing the rounds. One suggests that supporters of Reddy unleashed violence because they were unhappy with the “negative coverage” of his arrest a few months ago. Another is that the JD(S) may have provoked the violence to embarrass the BJP government, and yet another blames dissidents in the BJP. A senior high court advocate even says many Reddy supporters may have come “dressed as lawyers”, essentially to watch the proceedings, and when they were getting in, one of the impostors got into a minor altercation with a media person. Lawyers who saw this altercation, the advocate says, might have jumped in to support their “colleague”, leading to the fracas. Fingers were also pointed at the JD(S) because A.P. Ranganath, general secretary of the Advocates Association, is a follower of former PM H.D. Deve Gowda. He was picked up with four other lawyers on Saturday and released on conditional bail later. 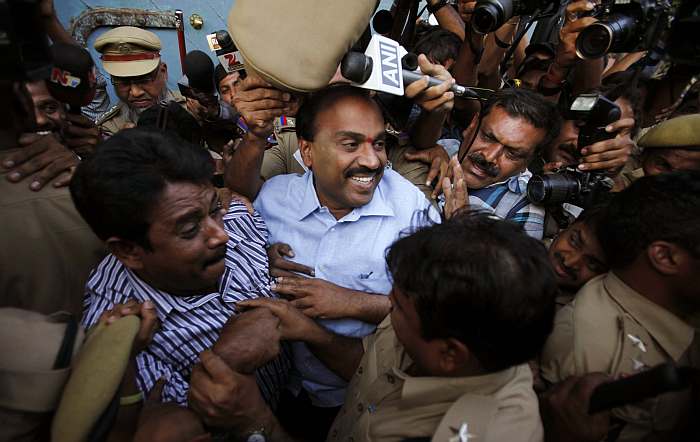 Hemmed in Coverage of Janardhana Reddy (centre) set off the violence

Senior advocates have a litany of complaints against their juniors. They say they have a “mob mentality” and are “itching to get violent”. They also rue that juniors control the Advocates Association and the Bar Council. One lawyer says, “On Monday, many of us seniors were against boycotting courts, but the juniors overruled us.” A former judge points to the changing profile of advocates in Bangalore: he says many of those who have enrolled recently are basically real estate agents, and “have the least regard for the traditions of the bar”.

In January, junior lawyers had thrown traffic out of gear in the main thoroughfares of Bangalore for over six hours after one of their colleagues was allegedly assaulted by a traffic cop. Media coverage of this had shown lawyers in bad light. Some see the recent incident as retaliation for that.

Justice Santosh Hegde, former Lokayukta, says, “When the lawyers beat the journalists,they were wrong. Now, their decision to boycott courts is also wrong. They can’t blackmail the system. The media should also try to break the logjam. The Bar Council has undergone such a transformation that seniors no longer have a voice. There is no need to hold an inquiry, there is enough evidence to file criminal charges straightaway. Everybody should now make a reconciliatory effort. Nobody should stand on prestige.” Justice Vikramjit Sen, the chief justice of Karnataka, has also said that boycotting courts is against SC orders. He ordered the home minister to act after the media submitted an appeal to him.

As all this unfolds, the Sadananda Gowda-led BJP government has been groping in the dark. The CM has refrained from commenting on the issue and chaired a couple of reconciliatory meetings (at the time of going to press he was chairing one more), but his eroded authority in the light of recent dissident activities in the BJP has not helped. The hostilities, it seems, will not end easily.