It's a nation waiting for devastation, for sleek planes to rain down lethal bombs, for deadly missiles to penetrate its impregnable mountains, for its ruins to turn into rubble, for its defiance to be punished, tamed. 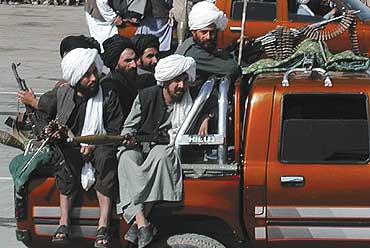 outlookindia.com
-0001-11-30T00:00:00+05:53
It’s also a nation that awaits misery and hunger, for its children to be maimed and killed. And it knows there won’t be any TV crews to film its peoples’ plight, capture their experience of horror and move the world. In a little less than a fortnight, ever since the World Trade Center and the Pentagon were attacked, Afghanistan has been reconciling itself to relive again what it’s been through most of its history: the nightmare of war.

Desperate people are liable to clutch at straws. There’s a sliver of hope that the US attack might just be avoided because of reports that Osama bin Laden left Afghanistan four days before the religious shoora of the clerics issued a decree (fatwa) asking him to depart from the country voluntarily. Interestingly, sources in Pakistan, known for their close communication links with the Taliban, claim it was bin Laden who persuaded a reluctant Mullah Omar to allow him to leave before the shoora was convened in Kabul. Sources close to both the Taliban and bin Laden in Pakistan and Afghanistan say that the most wanted person in history, along with his Arab lieutenants and battle-hardened security guards, left his safe haven for an undisclosed destination on September 16-17. His family, including his three wives and children, continue to reside near the Taliban’s spiritual headquarters at Kandahar.

Lebanon or Chechnya could possibly be where Osama might have opted to take shelter, sources close to the religious parties believe. An Afghan national, known for his close links with bin Laden, says he’s in good health. He has the protection of Arab youth who have pledged to sacrifice their lives to protect their leader.

Observers discern a definite pattern in developments in Afghanistan. First, the shoora was delayed; then it met to listen to the gathered ulema deliver fiery speeches before the decree, sought by the Taliban supreme leader, was issued through a resolution. And then came the news that Osama had already left the country. It is indeed debatable whether the US would take the news at face value and not demand from the Taliban proof of such claims.

Even the decree asking Osama to leave the country voluntarily could be perceived as a compromise, a face-saving device to obviate US attacks. But Taliban education minister Amir Khan Mutaqi explains: "The fatwa is not binding upon the government, it’s a mere recommendation. Mullah Omar will respect the demand of clerics and will convey the feelings of the council of religious scholars to Osama bin Laden." (The recommendation, incidentally, can be rejected by Omar.)

The decree, though, declares jehad in case the US launches an attack on Afghanistan and this is binding on Omar. This cry of jehad encompasses in its ambit the US and its allies, those neighbouring countries, Afghans and non-Afghans, Muslims and non-Muslims, who support the impending operation. The fatwa declares: "All Islamic books call for jehad against those non-believers attacking any Muslim state or violating the boundaries of the country. All those helping the attackers and providing information to them, Afghans or non-Afghans, are liable to death."

Interestingly, the fatwa says that if a Muslim country is not in a position to defend itself, Islam permits its leaders to seek help from others, Muslims or non-Muslims. It’s a clause perhaps inserted to rally radical Islamist groups and charity organisations as also non-Muslim opponents of the US. The decree expressed profound grief over the destruction and deaths in the suicide attacks in America and advised the US government not to rush to conclusions, unless complete investigations had been carried out to fix responsibility on the perpetrators of the crime.

"The Taliban are mindful of the fact that the US government will continue to punish Afghanistan, even if Osama is no longer in our country," says a Taliban source, adding that bin Laden decided on his own to leave Afghanistan, given the threats of a US attack. In fact, in 1998, after the US launched Cruise missiles on Khost, where the fugitive terrorist leader used to reside, bin Laden had reportedly asked Omar’s permission to leave Afghanistan. The permission had then been denied.

But neither the decree nor the news about bin Laden leaving the country is expected to stem the tide of enervated Afghans leaving their homes. Response to the approaching catastrophe varies; it depends on the individual’s attitude and power. Those in Afghanistan who are less poor, packed their belongings and bought themselves space in rickety vehicles to flee to the Pakistan-Afghan border. And then they found that this border had been sealed, that Peshawar and Quetta, Baluchistan’s capital, were already teeming with refugees. Some others have taken shelter in the villages, hoping the smart bombs won’t hit them. A large population, obviously, remains in cities and towns waiting...

UN officials in Islamabad say that more than 15,000 families had already entered the Baluchistan province before the border was sealed. The precise number of Afghans in the nwfp is not known, but the influx is mammoth. "More and more families are coming into Pakistan. Our initial estimates are that about two million more Afghans would seek shelter in Pakistan in the wake of the emerging scenario," they say.

The sealing of the Pak-Afghan border is not expected to stem the influx of refugees into Pakistan, impossible as it is for Islamabad to man the 2,400-km porous, craggy border. Two teams of the unhcr have already arrived in Pakistan from Geneva to assess the situation and take stock of the existing arrangements in nwfp and Baluchistan, which share a long border with Afghanistan.

Refugees say there’s veritable panic in Kabul, aware as they are that this war will be quite different from what the Soviets waged a decade back. Kabul reportedly wears a deserted look, markets are closed and the Taliban has established check-points on three roads leading out of the city to stop people from fleeing the city.

In contrast, the mood in nwfp is tense as thousands of activists of religious parties, students from madrassas and even government schools and colleges continue to hold demonstrations in Peshawar and elsewhere in the province. On Friday, thousands of Taliban supporters joined the protest demonstration of the Jamiat-Ulema-e-Islam chief Maulana Fazlur Rehman. The US was condemned, Pervez Musharraf’s decision to support Washington was criticised, the US flag was burnt, shops set afire, cars stoned and threats of resorting to suicide attacks on the invaders issued. The chief of the Tanzeem Nifaz Shariat-i-Muhammadi, Maulana Sufi Muhammad, who is quite popular in the northern districts of nwfp, has already declared jehad against the Americans, and the majority of leaders in different pockets of the province have endorsed the fatwa of the shoora in Kabul. These radical Islamist groups have also promised to send volunteers for assisting the Taliban government.

For Pakistan, the crisis has only just begun.For one, the possible entry of Taliban fighters into its territory along with the refugee influx has imbued menacing meaning to Kabul’s threat of wreaking vengeance on those neighbouring countries which support the US. The influx of Afghans has also rekindled dark memories of how more than a million refugees during the Soviet occupation of Afghanistan had torn asunder the social fabric of the NWFP and Baluchistan, and how cities like Quetta had slid into chaos.

Equally important is the political fallout. The influx of the Afghan refugees over more than two decades has upset the ethnic balance of Baluchistan. The historic Baluch-Pakhtun bonhomie is now a thing of the past. The ethnic divide between them has manifested through volatile political divisions and competition. This has given a fillip to Baluch nationalism, which the state of Pakistan had managed to control after much efforts throughout the ’70s and the early ’80s. A fresh wave of Afghan refugees could only exacerbate this problem.