Losing two finals to the Aussies in six months. Over to the kangaroos on home turf. 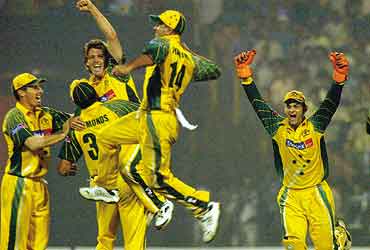 outlookindia.com
-0001-11-30T00:00:00+0553
On March 23, 2003, we approached the finals of the World Cup just as we would any other game. Nothing changed on November 19, 2003, when we met India once again, this time in the finals of the TVS Cup at Eden Gardens, Calcutta. Most of the boys in the team have played big games in the past, so there was no question of the team being overawed or getting carried away on the big day. In fact, we had visited the Eden Gardens for practice a few times and most of us were looking forward to the game just to enjoy the atmosphere and electricity that a 100,000-plus audience can generate.

The wicket was not a featherbed, and I think the problem was that it was prepared too early. We were in Calcutta since last Friday, and I thought it was ready for a game on Saturday itself. By Tuesday, it had started to crumble a bit, and this made the bounce and turn pretty inconsistent. This is why no batsman really got in on the wicket. There were plenty of 30s and 40s from both sides, but nobody could really kick on to get a big score. A couple, like V.V.S. Laxman and Sachin Tendulkar, were particularly unlucky as the balls that bowled them really kept low. That was also the reason why Tendulkar played and missed so often at the start of the innings—something that he does not do normally.

I was really fortunate to win the toss and am not sure if we would have been able to chase on that wicket. The Indians did look pretty much in the hunt when they reached 100 in a little over 20 overs, and still had eight wickets in hand. It was at that point that Bichel, who has been slow off the blocks in the tour, did enough off the seam to bowl Tendulkar. It was against the run of play, but we knew that Tendulkar had planned on staying right till the end of the innings. So his wicket was decisive.

Even at that stage, we knew that Rahul Dravid was still a danger and when he got together with Hemang Badani, the game was again slipping away from us. And to make matters worse, that was not the only thing slipping—the ball was wet and bowling getting very difficult. At 149 for four, India was on top. Badani's wicket was a crucial breakthrough. From then on, Ian Harvey, whom we fondly call the Freak, got into action and mopped the tail in all of eight deliveries. The ball was dark, the bounce extremely inconsistent and the ground wet. Batting would have been difficult even for the top-order. It was impossible for the Indian lower order. Only Agarkar succeeded in hitting the discoloured ball out of sight whenever he connected, but he quickly ran out of partners.

When we batted, the Indian spinners did really well in conditions that suited them, but I am sure the Indians were disappointed with their catching. I was lucky for a second time in this tri-series, because I was dropped even before I had scored.

The Indians will not be happy to have lost two finals to Australia in six months. I don't know about any psychological scars, but I'm sure there is disappointment in the Indian camp. The think-tank will now be trying to move away from the one-day game and focus on the forthcoming Test series. I'm sure the Indians will be professional enough to realise that the longer version is a different ball game, and that conditions in Australia are very different from those in India. It will be a new start and a different challenge, so John Wright and the rest of the staff will try to get the team to look ahead and not at what has gone by.

It was tough on both Saurav Ganguly and Rahul Dravid that the former had to miss out on the finals. For Dravid, the burden of being the skipper, wicketkeeper and batting anchor must have been too much for such a big game. Besides missing Ganguly the captain, the Indians also missed Ganguly the batsman, who might have known the ins and outs of his home pitch.However, like all sensible sportsmen, he took the right decision of not jeopardising a future tournament for a single match.

I took the toughest decision of the tournament by keeping Brad Hogg out of the team. It was tempting to play him since I knew that the track would take spin, but I also knew that gripping the ball would be really difficult. Since I planned on batting first if we won the toss, I decided to go in with the pacemen and the dibbly-dobbly bowlers. It was also difficult to omit Michael Kasprowicz from the side after he had bowled so well against the Indians at Bangalore. But then, a captain can have worse problems than wondering whom to drop, and the difficulty we have with picking the team just proves our bench strength.

Looking back at this tournament, all I can say is that we are absolutely thrilled that this team could achieve such a great result against a full-strength Indian side on home turf. When I landed in India without Glenn, Jason and Brett, I was a little worried about whether the relatively inexperienced bowling attack would be able to perform against the strong Indian batting line-up. Honestly speaking, I guess I would have been more comfortable with them on the flight since they were tried and tested performers on all surfaces. But Willo and Bracks rose to the challenge and filled in magnificently, and the latter exceeded my expectations. Bracks has always been seen as a good one-day bowler, but with this performance, he has also thrown his hat in the ring for a berth in the Test squad. The other youngster, Michael Clarke, also has made strides in this tour, and his contribution yesterday was evidence that he is a player to watch out for. The team goes back as a happy bunch, and it will be nice to see the spotlight on the Wallabies over the next couple of weeks. I'm not a big rugby fan, but I will be there at the Telstra Stadium to witness the Australia-England finals. Gilly, Marto and Matt will be there as well, and Brett told me he had tickets for the game.

We have a few days off before my game for Tasmania against New South Wales on the 29th. After that we will be meeting India once again, this time for the Tests. I was in India during the Under-19 cricket tournament in Pakistan and read a lot about Irfan Pathan. It will be interesting to see him in action in Australia, along with Balaji, the other rookie pacer. The rest of the team the Indians have announced holds no surprises. The Australian squad has not yet been announced, but it will be interesting to see whether Glenn, Brett and Jason will get fit in time for the first Test at the Gabba. I believe Jason has recovered fully from his side strain, but am not too sure about Brett and Glenn being ready so soon.