Assessment done, India is yet to find compelling reasons to send its troops to Iraq Updates 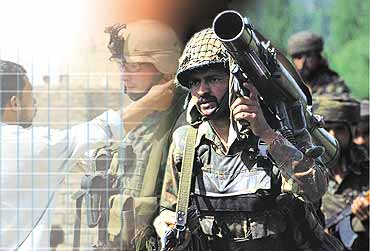 outlookindia.com
-0001-11-30T00:00:00+0553
New Delhi is veering around to the view that it would not be prudent to send troops to Iraq and assist the United States in its attempt to stabilise the country it had invaded three months back. This is the decision the Cabinet Committee on Security Affairs (CCSA) is expected to take before the monsoon session of Parliament commences.

From the time the Americans requested New Delhi for troops to Iraq, the government has been on a veritable see-saw, one moment appearing keen and then developing cold feet. As a senior government official pointed out to Outlook, "On June 16, after our interaction with the Pentagon team in New Delhi, the CCSA decided that we should consult coalition countries, the UN, Iraq's neighbours, and the Iraqis to better inform ourselves to take a decision. We have now gone through with the process."

What the elaborate consultation process has yielded is what the CCSA is to mull over in its critical meeting. The net assessment is pessimistic about the conditions under which India would have to commit its troops. Yet, government officials say the CCSA isn't expected to say a flat 'no' to the US: it would rather leave room to reconsider its decision should the US get a UN mandate or a broad-based Iraqi appeal is made to India. At this moment, neither is an immediate prospect.

The CCSA, however, is expected to consider the option of getting involved in a range of activities including medical assistance, restoration of utilities and rehabilitation. It is not clear what kind of security arrangements the rehab action might entail, and how this would be met. This move has the advantage of reaching out in meaningful and practical ways to the Iraqis and at the same time not alienating the Americans.

The Indian government, sources say, has laid out a framework for its involvement in Iraq. One official sums it up as, "If we get involved in Iraq's stabilisation, then it can only be part of a larger goal that will benefit Iraqi people." The Americans have been told what the Indian framework for the involvement in Iraq is. But beyond recognising that New Delhi's experience is more valid and relevant than America's, Washington has been unable to create favourable conditions for India to send troops.

The process of assessment was completed last week: Foreign Secretary Kanwal Sibal met senior American officials in Washington; simultaneously, Secretary (Asia, North Africa) R.M. Abhyankar visited Iraq to assess the circumstances in which Indian troops would have to operate. Abhyankar couldn't meet the US administrator of Iraq, Paul Bremer, but sources say he returned to India with the impression that it would be difficult to police the key city of Mosul in north Iraq, which is the sector the Americans wanted Indian troops stationed. Though north Iraq is dominated by Kurds who support the Americans, Mosul simmers with tension between the Arabs and Kurds.

Abhyankar also thought the Iraqis wanted India to help in drafting a constitution, preparing electoral rolls and conducting a census. Primarily, though, it is feared that our troops, even though operating under the Indian flag, could still be perceived as occupiers, and come under attacks from the Iraqis.

On his visit to Washington last week, Sibal and his team discussed with the Americans the overall roadmap for Iraq. Their reading: "The US realises that the situation in Iraq is far more complex, more fluid than what they had imaged for the post-war scenario. The US is now reconciled to staying in Iraq longer than they had earlier thought." No doubt, a grim testimony to the deteriorating situation in Iraq.

Also, Washington told the Indian team that there was no possibility of seeking a more explicit UN mandate for mobilising international troops in Iraq.India had earlier expressed its preference to send troops to Iraq under the UN flag. "There is nothing new on command and control, either," say sources. For the Indian government, it is a prickly issue to have its troops answerable to the American administrator in Baghdad.

There was also no clarity on who was to bear the cost of Indian troops. Says an official who estimates the cost to be well over Rs 1,000 crore, "The US expects India to foot the bill. This kind of money is better spent on providing greater security in Kashmir, for instance, than Iraq."

Perhaps Indians could have agreed to police Iraq had it been under an indigenous authority. Not only have the Americans failed to cobble one up, they told the Indian officials that the Iraqis "have no habit of consultation because of 30 years of not talking to each other". That's why a local governing entity has been a problem. Yet, the US has a roadmap which hopes to appoint (not elected, as promised earlier) a political council of 25-30 Iraqis by July-end and then, in six to nine months, convene a conference for drafting a new constitution. This is to be followed by general elections.

The US feels the security situation is improving, although daily ambushes point otherwise. The US thinks the situation can be "managed" if they get Saddam Hussein. With this, the remaining Baathist resistance would automatically "die out". In contrast, Sibal's team feels Washington tends to discount the level of popular resentment against it. It is this resentment, some officials feel, that will rub off on Indian troops were they to go there. "It will be terrible," said a source, "if we were to begin shooting Iraqis. It will be worse if they start shooting at us. And all this, for what?" It's definitely not a price that India should pay to bail out and please George Bush and his team.

In Search Of The Escape Clause