Without a containment plan, the man-monkey conflict spreads alarmingly 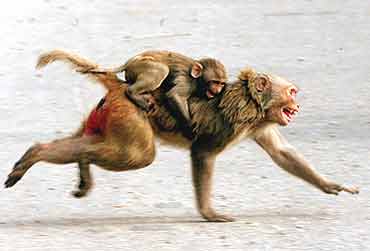 At least Verma survived. Two-month-old Kajal Pandey wasn't so lucky this January. She was asleep at the Pandey home in Delhi's Lakshmi Nagar when a monkey slipped in, bit her and gouged out her eye. When her mother Kanchan swung a bucket at it, the creature smashed Kajal's head on the floor. The hospital declared the infant dead on arrival. The Pandeys soon moved out, terrified that monkeys would attack Kajal's twin, Payal.

Another attack on August 29 claimed 60 victims. These weren't humans; they were rhesus macaques stuffed into sacks and clubbed to death before being dumped in the fields of Basana, Haryana. S.K. Dhar, chief forest conservator, Haryana, says: "This is a highly sensitised village; the motive was clearly communal mischief."