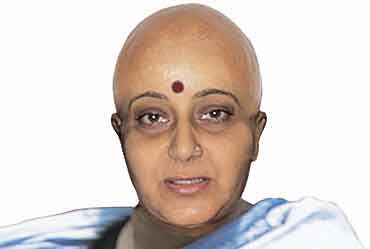 Former BJP cabinet minister Sushma Swaraj, the face of the BJP’s shrill anti-Sonia campaign, is under fire from leading Hindu dharmacharyas and heads, who say that Sushma’s threat to tonsure her head in the event of Sonia Gandhi becoming India’s prime minister is an insult to Hindu culture.

The first salvo was fired by the Dwarka Shankaracharya, Jagadguru Swami Swaroopanand Saraswati, who said that tonsuring of the head was most ‘un-Hindu’. "Hindu scriptures tell us that the head is tonsured in the event of death or similar situations. To use it as a form of protest against a living being is tantamount to abusing our ancient scriptures. It is an insult to anything living and our ancient sages are very clear about it," the Shankaracharya explained.

The mahant of the prestigious Kalkaji temple in the capital, Surendranath Avadhoot, says the BJP, which has deliberately forgotten the Ram temple issue, is now harping on preserving Hindu traditions. "Does she (Sushma) know that in Hindu culture, only widows wear white. Isn’t it an insult to the liberal Hindu ethos?" he asks.

Avadhoot said that Sushma’s threat smacked of feudal nonsense. "This is Sushma’s idea of how Hindu widows should be treated. Her head must be tonsured. She must be clad only in white to prevent her from tempting and seducing men. She must eat gram and sleep on the floor. There cannot be a bigger insult—even threat—to the Hindu understanding of the world," he said.

In another statement, president of the World Council of Arya Samaj, Swami Agnivesh, attacked the ex-I&B minister, saying that her threat to shave her head was an attempt to foist a stereotype on 21st century India. "It is people like Sushma Swaraj and Uma Bharati who lend legitimacy to male-dominated, obscurantist outfits that discredit our religion, culture and nationhood. The Arya Samaj has always revolted against such decadent practice," Agnivesh said. As a warning, he added: "The Vedas warn that in a country where women are kept in misery and degradation can’t receive the blessings of god." The swami called upon women to fight "these uncivilised agents and mouthpieces of oppression and discrimination".

The BJP leader is said to have gone underground after Sonia’s decision not to accept the prime ministership.