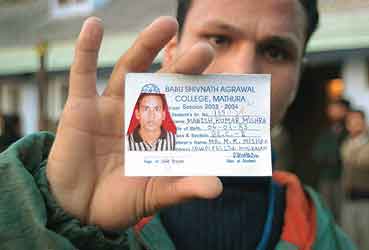 Brawls inside running trains resulting in deaths of daily commuters is not uncommon in India. But on January 24, it outdid its own provincial limits when 22-year-old Manish Mishra—not just another passenger but PM A.B. Vajpayee’s grand-nephew, travelling by Chhattisgarh Express to Mathura—was thrown out of the train near Kosi Kalan when he objected to some co-passengers indulging in eve-teasing. Manish died due to a head injury caused by the fall. On the Delhi-Mathura route, where more than 100 deaths have been reported under similar circumstances in the past one year, this would have been just another one, but for Manish’s exalted status.

The facts about his kinship came out later, though. For, when Manish’s father, Mahendra Mishra, first approached the railway authorities in Mathura and Kosi for justice, he wasn’t given a decent hearing. Until Vajpayee himself intervened. Suddenly, a creaking, rotten system sprang to life. Union agriculture minister Rajnath Singh dashed to Lucknow and CM Mulayam Singh Yadav met Vajpayee and owned "moral responsibility" for the incident. On Mulayam’s instructions, dgp (railways) B.K. Bhalla has begun investigations in right earnest.

While computer sketches of the accused have been generated, six police teams are simultaneously carrying out investigations. Manish’s death has put the plight of millions of rail passengers in sharp focus. Says railways spokesman Y.M. Siddiqui: "We’re going to take urgent steps to stop the repetition of such crimes." Not a day too soon.

Everyman Is A Midas