The call comes through; No high in Dubai; The ghost of '84; A very warm welcome; Cleaning up, after; Knight up, sizing up the board 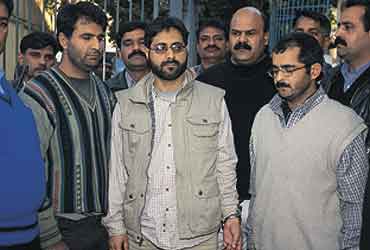 outlookindia.com
-0001-11-30T00:00:00+0553
NEW DELHI
The Call Comes Through
Two of the key accused in the December 13, 2001, Parliament attack conspiracy case, Delhi university lecturer Syed Abdul Rehman Geelani and Afsan Guru, were acquitted last week for lack of evidence by the Delhi High Court. But the court upheld the death sentences handed out to two others, alleged Jaish militants Mohammed Afzal and Shaukat Hussain. Afsan is Hussain’s wife. On December 16 last year, a lower court had found all four guilty and sentenced three of them—Afzal, Hussain and Geelani—to death. Afsan had got a five-year term after being absolved of the conspiracy charge. All four had been tried under POTA.

The verdict comes as a heavy blow to the Delhi police, especially in the light of the bench’s observation that "the prosecution has not been able to sustain the charges against him (Geelani)". The court said the only evidence linking Geelani to the attack was the phone conversation he had with Afzal and Hussain, "but by itself, and without anything more on record, it is not sufficient...." It also said there is no evidence on record to establish that Geelani was in touch with the actual attackers.

On the role of Afsan Guru, the bench observed that "she was admittedly a housewife.... Merely because some meetings took place, assuming it to be correct, in the house would not be sufficient by itself to impute knowledge". Lawyer Ram Jethmalani welcomed Geelani’s acquittal saying the verdict "will restore the confidence of J&K’s inhabitants in the integrity and competence of the Indian judicial system".