To slip on too smooth a marble; Terror, where is thy string?; The kiss of death; Hertz instinct; SEZ who? Promising land 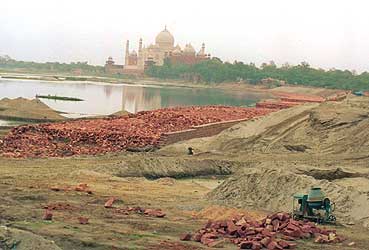 outlookindia.com
-0001-11-30T00:00:00+0553
DELHI
To Slip On Too Smooth A Marble
Is former UP CM Mayawati in trouble over the CBI’s Taj corridor report submitted to the Supreme Court on September 11? With Mulayam Singh Yadav hell-bent on pushing the CBI probe to its logical end and, therefore, all ready to provide the central investigators with every document that they require, the noose seems to be tightening on Mulayam’s most bitter rival. Investigators say Mayawati’s interrogation on September 2 in Lucknow did not yield much except ‘vague’ utterances. However, Mayawati has purportedly accepted she had approved the commencement of the project and has also named four of her close aides—principal secretary P.L. Punia, former chief secretary D.S. Bagga, ex-environment minister Naseemuddin Siddiqui and former state environment secretary R.K. Sharma—as accomplices in the decision. Also named was Union environment secretary K.C. Mishra.

What has added to Mayawati’s troubles is Mulayam’s reported decision to turn the officials named as approvers in the case. Of them, Punia is said to have been willing. The officers named by Mayawati have been interrogated by the CBI and all of them without exception have taken the view that the decision was approved by the then CM herself. On September 11, after the cbi submitted its two-volume report to the apex court, it directed the investigating agency to submit a report within a week on the assets of "four persons" allegedly involved in the scam—"go after the trail of Rs 17 crore released for the construction of the project and find out as to where it had gone, how it has been spent and who have benefited from it". The signatory to this crucial order was Sharma who has been thoroughly questioned by the cbi and is a key witness in the case.