There is death in the air; Sparks of hope; Dark sun in the East; More than a touch of hate; Who's first among the equals? and Temptations of the flesh 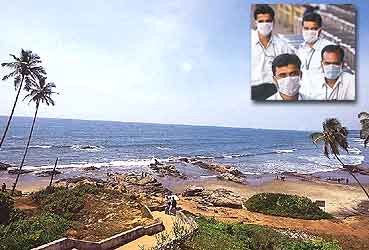 outlookindia.com
-0001-11-30T00:00:00+0553
DELHI
There Is Death In The Air
First the bad news. The killer flu has finally arrived in India. Now the good news: the young marine engineer who tested positive for SARS in Goa last week has, by all accounts, recovered from the affliction that has felled some 60 people around the world, mostly in Southeast Asia.

The case of Prashil Varde, a 32-year-old marine engineer who arrived in Goa from Singapore after a brief Mumbai stopover, is certainly curious. A week after arriving in the tiny coastal state, he admitted himself into the Goa Medical College hospital. Varde was discharged after a two-day stay during which his chest X-ray reports were found to be normal and, more importantly, his fever had subsided. He was at home when his blood and sputum samples turned out to be positive for SARS. Varde promptly volunteered to go to the hospital’s isolation ward. His wife is also under "isolation" at home, say health ministry officials. To quell rising panic, Goa chief minister Manohar Parrikar reassured all: "The patient has been cured after he was treated."

But the battle against SARS is far from over. Late last week, news washed up of another suspected case in Delhi. A 42-year-old New Zealander, Dimer Kin Ross, who reached Delhi on a Thai Airways flight last Wednesday after spending a fortnight in Bangkok, was found exhibiting SARS symptoms. He was shifted to the Ram Manohar Lohia Hospital where he was put in a special isolation ward after the hospital was put on high alert.

What does India do next? Press the panic button and declare a shrill SARS alert? Not really. Doctors say the time has possibly come to test our preparedness to deal with the flu caused by a tricky and nasty mutant of a virus that causes the common cold. So don’t panic, make sure to promptly ask for medical help if you come in contact with a SARS suspect and report to a well-equipped hospital in your neighbourhood. No one knows what keeps SARS away. But being a tad careful helps.