Gently Go I... GI Joe; VIP avenue: it takes all sorties; The dance of nine veils; An almanac from Khalistan; Yoga as salad dressing; The heart of darkness. 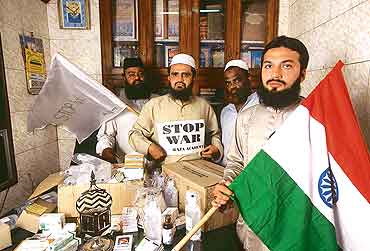 outlookindia.com
-0001-11-30T00:00:00+0553
MUMBAI, MAHARASHTRA
Gently Go I
When six human shields left Mumbai for Amman on their way to Baghdad, they carried with them return tickets on Qatar Airways and a loud hope that they will "become martyrs". After getting Iraqi visas and a formal approval from Jordan’s foreign ministry, they will station themselves in shrines and hospitals in Baghdad along with 160 human shields from around the globe.

The idea seems to be to make it difficult for Donald Rumsfeld to utter the words ‘collateral damage’. Since the human shields are positioned in non-strategic parts of Baghdad, if there is any casualty among them then it will mean that the Americans have transgressed. Businessmen Sohail Rokadia, Mohammed Arif Razvi, Sayed Mazhar Razvi, Khalil Zahid and Islamic scholars Mohammed Rafique Shafi Ahmed and Mohammed Syed Noorie swore that they will reach Baghdad at any cost, "either through Jordan or through Syria".

Once they reach their destination, which they say is "either Baghdad or honourable death", they will be followed in phases by over 230 Mumbaikars who have similarly volunteered to become shields. (Eighteen of them, it is claimed, are Hindus). Outlook met the six men just before they left for the airport accompanied by a motorcade and general celebration. Says Sohail: "There is a lot of importance given in our religion to martyrdom." He said he did not particularly like Saddam Hussein and that he was risking his life only for the "people of Iraq".