The other mujahideen; Playing Russian roulette, almost; The zombies of terror; Adil Farooq ko gussa kyon aata hai; One marriage, one divorce, a funeral and The fading aura of a demagogue. 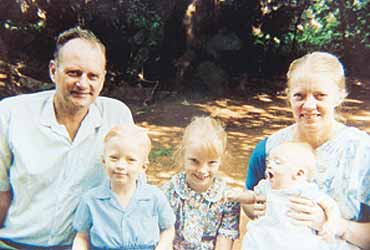 outlookindia.com
-0001-11-30T00:00:00+0553
BHUBANESHWAR, ORISSA
The Other Mujahideen
His name once spelt terror for the adivasi Christian population of Keonjhar and Mayurbhanj districts of Orissa. Now he is behind bars. But that has done little to diminish his nuisance value. Dara Singh, the prime accused in the murder of Australian missionary Graham Staines, is the most unpopular jail inmate in the state. None of the prisons where he has been lodged want to keep him for long, given his penchant for trouble-making and rabble-rousing. He reportedly stages protests, hunger strikes and agitations quite often to incite his fellow inmates. Though Dara Singh—outfitted in a saffron turban—claims to be seeking better amenities in jails, his continual religious exhortations of his co-accused have led jail authorities to believe that he intends to stir up communal tension.

On February 27, Dara Singh and six of his co-accused in the Staines triple murder case attacked and injured the jail superintendent and two other staff members of the Choudwar Circle Jail where they are currently lodged. He met the prison superintendent, H.M.S. Pasha, ostensibly to apologise for having abused him earlier. But on entering the office, he and his men fell on Pasha and two other jailors D.N. Patnaik and Sukanta Panda, injuring them.

Authorities feel Dara Singh is trying to delay his case and hold up the trial as he fears an unfavourable verdict. Earlier, he and 12 other accused in the Staines case had gone on a hunger strike demanding transfer of their case from the Khurda sessions court.