When it's a cow eat cow world; Revived: The countdown to his crucifixion; Hiccups in the Gangland saga; College of commerce; The queen and the turncoats and To bridge the information gap 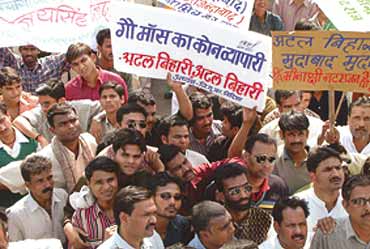 outlookindia.com
-0001-11-30T00:00:00+05:53
BHOPAL, MADHYA PRADESH
When It’s A Cow Eat Cow World
Stung by Prime Minister Atal Behari Vajpayee’s remark that his party leaders had failed to counter the "baseless" propaganda unleashed against him by the MP Youth Congress, the BJP leaders of Madhya Pradesh directed their ire at the posters and banners put up by the Youth Congress which alleged that the export of beef had increased under the NDA government. "Gau maans ka kaun vyapari, Atal Behari, Atal Behari (Who’s the beef trader? It’s Atal Behari)," said one of the posters, which were subsequently burnt in the assembly premises with the BJP leaders vowing not to allow the Youth Congress to get away with its "malicious" campaign.

But Youth Congress leaders say they are merely echoing what chief minister Digvijay Singh has been saying consistently. It was Digvijay who had come out with a "revelation" to counter the BJP’s cow card: beef exports had gone up after the nda came to power.

A visibly upset Vajpayee admonished party leaders at the bjp parliamentary party meeting in Delhi for allowing the Congress to make wild allegations against him. He said there was a complete ban on the export of beef, so there was no question of exports going up.

Even as the beef controversy moved away from the front pages, the VHP’s other gambit in the state—laying claim to the disputed Bhojshala in Dhar—poses a major challenge for Digvijay. He managed to foil an attempt by the Hindu Jagaran Manch to storm the disputed site without bloodshed, but it looks as if the issue is all set to snowball. Is it victory for the A-team? Or, will it be team B?