Hungry demons exhumed; The dramatist's pen versus the Speaker's word; Soldiers of a borderless world; Mrs G's ghost stirs the blue elephant; Tentacles of the octopus and Where Vajpayee is more than enough. 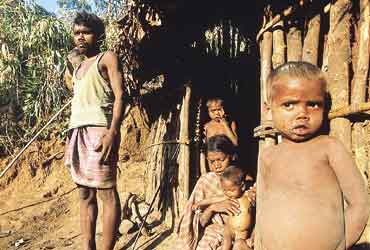 outlookindia.com
-0001-11-30T00:00:00+0553
BHUBANESHWAR, ORISSA
Hungry Demons Exhumed
When reports of starvation deaths in Keonjhar and Kalahandi districts had first appeared in August, the Orissa government had dismissed these as the media’s wild imaginings. It had asserted that its poverty alleviation programme was on track and running smoothly.

A recent report by N.C. Saxena, a special commissioner appointed by the Supreme Court has, however, confirmed that starvation is a reality in Orissa and that the state government violated the apex court’s orders when it came to poverty alleviation. Saxena’s report is based on recent visits to the affected districts.

In a scathing letter to the chief secretary and chief development commissioner of Orissa, Saxena has pointed out that despite the Supreme Court’s order of November 28, 2001—to complete the identification of bpl families by January 1, 2002—it had not been done. Many deserving families in the villages he visited were yet to be issued ration cards.

The court had also directed the state government to ensure that all BPL families receive their entitlement each month. Saxena’s report suggests that this was not being done. His investigations also showed that foodgrains were not reaching the beneficiaries of Antyodaya Anna Yojana.

Saxena points out that most of the problems are the result of official apathy and callousness. He cites the example of many poor families residing in the border villages of Keonjhar who were denied facilities of BPL rations, on the ground that they came from outside the district. Enquiries revealed that they were living for more than two decades in that district.