The wit's end, or the gentle fable of Abraham; Lighting memory's short fuse; An unappetising breakfast; Shangrila panchayat; Less than civil in their civvies and The whiplash has its uses. 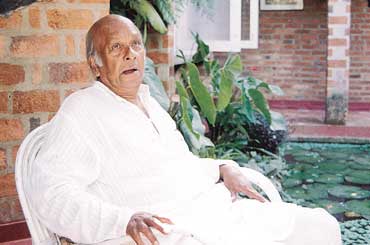 outlookindia.com
-0001-11-30T00:00:00+0553
THIRUVANANTHAPURAM, KERALA
The Wit’s End, Or The Gentle Fable Of Abraham
He will be counted among the best of Indian cartoonists. With his wry wit and liberal outlook, Abu Abraham, who died at the age of 79 in Thiruvananthapuram on December 1, left his stamp on every cartoon he drew in a career spanning over 50 years.

"A good cartoon is like a poster. What it wants to say should be very clear," he had once said. His anti-Emergency drawings made him an icon during Mrs G’s time despite concurrently being an RS MP.

Abu was born in the small town of Mavelikkara, central Kerala, in 1924. He displayed a penchant for drawing from the age of three. He began his career as a reporter-cartoonist with Bombay Chronicle in 1946. He then went on to draw for Blitz and Bharat before joining Shankar’s Weekly in 1951.

Such was the quality of his cartoons that he was taken on by The Observer, London, as the paper’s first political cartoonist. Later, he worked for The Guardian. He returned to India in 1969 and was known for his prolific output. His cartoons used to appear periodically in Indian publications.

But Abu wasn’t merely a master of line. Words, for him, were equally effortless. He wrote three books, one of them on the Emergency. He also produced an animation film, No Arks, which won a special award from the British Film Institute.