The memory when I was not a Hindu; Of rebellion and death; Falling from the high skyscrapers; Breaching the legacy's fortress; Lapsing into a primitive state and Defending Sappho. 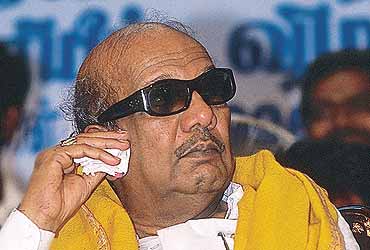 outlookindia.com
-0001-11-30T00:00:00+0553
CHENNAI, TAMIL NADU
The Memory Of When I Was Not A Hindu
The DMK chief, M. Karunanidhi, has a tendency to suddenly remember his roots—that he once stood on the atheistic Periyarite plank and therefore his party’s alliance with the BJP is ideologically unpardonable. Such nostalgia sometimes carries him away and invites trouble in the form of sharp criticism from the Hindu right. Recently, while speaking against the Tamil Nadu ordinance banning forcible religious conversions, Karunanidhi wondered: "Who is a Hindu? You must ask EVR ‘Periyar’. A good man would say the word Hindu means a thief."

He, however, did weave in a safety clause: "I prefer to see the term as meaning someone who steals the heart." The likes of the BJP and the Kanchi Shankaracharya were expected to react harshly, but even the Congress, which seemed to be moving closer to the DMK, could not countenance this interpretation.

The DMK is clearly drifting away from the BJP. For over a month, the former’s mouthpiece, Murasoli, has been carrying a frontal attack on Hindutva and has even been running a column of Periyar’s writings. In September, Karunanidhi had attacked the prioritisation of Sanskrit in temples and the hype over Ganesh Chaturthi. The anti-conversion ordinance seems to have only made Karunanidhi keen on quitting Hindutva and reconverting to the Dravidian/secular camp, though he does not seem to have stolen many hearts.