A new sherrif for the seven sisters, Ashes and diamonds, Index fingers, Splitting some more atoms, A little bit of federal itch and A messy balance sheet. 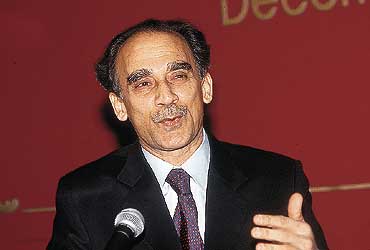 outlookindia.com
-0001-11-30T00:00:00+0553
GUWAHATI, ASSAM
A New Sherrif For The Seven Sisters
Arun Shourie is the new terror that clouds the collective visage of bureaucrats and politicians in the Northeast. Lately in the news as a no-holds-barred disinvestment minister, Shourie comes as a terrifying spectre for those who hold the reins of power in the seven sisters and Sikkim when he dons the mantle of minister for DONER(development of northeastern region).

Shourie, who as a journalist earned the reputation of an inveterate exposer of scandals and now in the vanguard of India’s new economic line, is again doing some real tough talking.

He has informed all the eight states that projects already sanctioned are being monitored by various central agencies. Shourie has also managed to persuade the CAG to audit a few selected projects during the execution stage itself.

Not content with putting the fear of God in the hearts of the avarice-stricken, Shourie has decreed that each project has to obtain quarterly progress reports and utilisation certificates. Only those will ensure the release of subsequent instalments.

As of now, the Centre has allocated Rs 1,346.72 crore from the Non-Lapsable Central Pool of Resources (NLCPR) for the Northeast, since its inception in 1998-99. Each central ministry is required to set aside 10 per cent of its budgetary allocation for the NLCPR. But only now will any of this money perhaps really come of use to the development-starved Northeast, thanks to Shourie.