Under pressure, Pakistan attempts to rein in the mujahideen 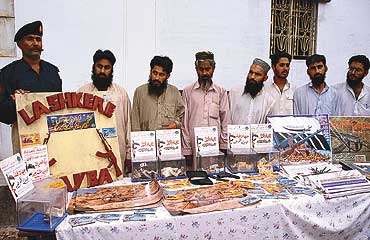 outlookindia.com
-0001-11-30T00:00:00+0553
In a concerted attempt to counter the growing influence of the jehadi outfits, the Pakistan government has proscribed them from collecting funds and regulating the kind of education imparted at madaris—which provide the ideological sustenance and recruits for jehad. Earlier, on August 14, the government had banned two leading sectarian outfits—Lashkar-e-Jhangvi and Sipah-e-Mohammad—for their alleged involvement in terrorism.

The ban on collection of funds, as of now, is limited to the Sindh province. The jehadi outfits can't place donation boxes at public places, nor put up signboards announcing themselves at their office premises. In contrast, the countrywide ordinance on madaris seeks to integrate the religious seminaries with the national education system, which the government hopes will lead to the introduction of a secular curricula at the latter. The regime is planning three model madaris in Islamabad, Sukkar and Karachi, including one for girls. These would be affiliated with the newly-constituted Federal Madaris Board, which comes into existence August-end.

It's still too early to gauge the impact of the ordinance, but many here believe major headway has been made at pulling the religious seminaries out from their narrow theological groove. As federal minister for education and religious affairs Dr Mahmood Ghazi says, madrassa students are susceptible "to extremism and exploitation. We want to discourage this trend".

As was expected, the ordinance has left religious personalities perplexed and unhappy. Analyst Azizuddin Ahmed says, "Their resistance is based on the assumption that modern scientific disciplines in the curricula, if introduced, would be an insidious attempt to spread secularist ideas and popularise Western culture".

The ban on collection of funds seeks to starve jehadi outfits of financial resources. Yet, there is considerable ambiguity about the government's seriousness. For one, only the Sindh government has notified the order. Second, all 250 jehadis arrested on August 22 for violating the ban were released the next day. Third, federal interior minister Lt Gen Moinuddin Haider reportedly informed the leadership of Jaish-e-Mohammad, Lashkar-e-Toiba, Harkat-ul-Mujahideen and Hizb-ul-Mujahideen that there was no intention to ban the activities of these jehadi organisations. Haider claims that the jehadi leadership has assured full cooperation in enforcing the ban. These contradictory statements have led analysts to question the government's motives.

Theories about the government's decision abound. The immediate factor could be foreign pressure, specifically Washington's, to rein in these groups. Also, it is believed that their threats of carrying over the violence in Kashmir to other Indian territories, and the government's silence on the issue, has enabled India to accuse Islamabad of complicity. In other words, Pakistan had to be seen to be doing something.

There was also domestic pressure. The proliferation of jehadi outfits, each boasting a separate agenda, was perceived to have been the factor behind the spurt in intra-Sunni and Sunni-Shia violence.

Meanwhile, the jehadi outfits have refused to comply with the Sindh government's ban orders. The Muttahida Jihad Council (United Jehad Council) has decided to hold talks with the government on the decision. But Abdullah Shah Mazhar, a senior member of the council, says, "Our fund-raising boxes are kept in public places.People have refused to return them despite the government orders, which shows their level of commitment to the Kashmir cause."

Similarly, Harkatul Mujahideen leader Hafiz Mohammad Idrees says, "Can they stop the people from joining the jehad or donating funds even if they remove the signboards and boxes? We have not started the jehad on the orders of the government, and similarly no ruler can ask us to stop it."

Such stiff opposition has led many to believe that the federal government will dither in imposing a nationwide ban on funds collection. If the government does decide on a total ban, it had better be prepared for a good fight.