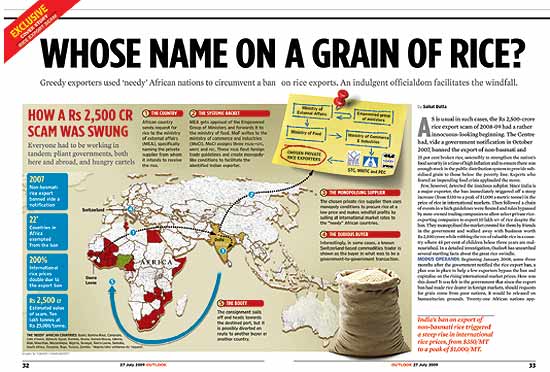 Last year, even as the Union ministry of food and public distribution was struggling to avert a looming food crisis, the commerce and industry ministry sought to export 2,25,000 tonnes of non-basmati rice to 22 “friendly and needy” African countries which included Ghana and Sierra Leone. The rice was sought to be exported despite an October 15, 2007, ban on export of grain. Worse, the shipments were sought to be routed through a clutch of private entities, which allegedly diverted the grain and made profits. The entire scam was estimated to be worth Rs 2,500 crore.

Earlier, in its July 27 issue, Outlook had exposed how non-basmati rice was exported despite the ban. The decision to export was taken by an Empowered Group of Ministers (EGOM) chaired by foreign minister Pranab Mukherjee, and including commerce minister Kamal Nath, finance minister P. Chidambaram and agriculture and food & public distribution minister Sharad Pawar. The EGOM ought to have deliberated on the country’s food security before giving its approval. Instead, it even ignored serious reservations expressed by two of its key members—Chidambaram and Pawar.

Now, Outlook has accessed the cabinet notes, file notings and documents detailing the exact nature of these objections. The strongest opposition came from Chidambaram. In a detailed note dated July 22, 2008, the finance minister referred to a detailed note prepared for the EGOM by the Union ministry of food and public distribution, and pointed out that there was barely enough rice in India’s food stocks to allow for exports. 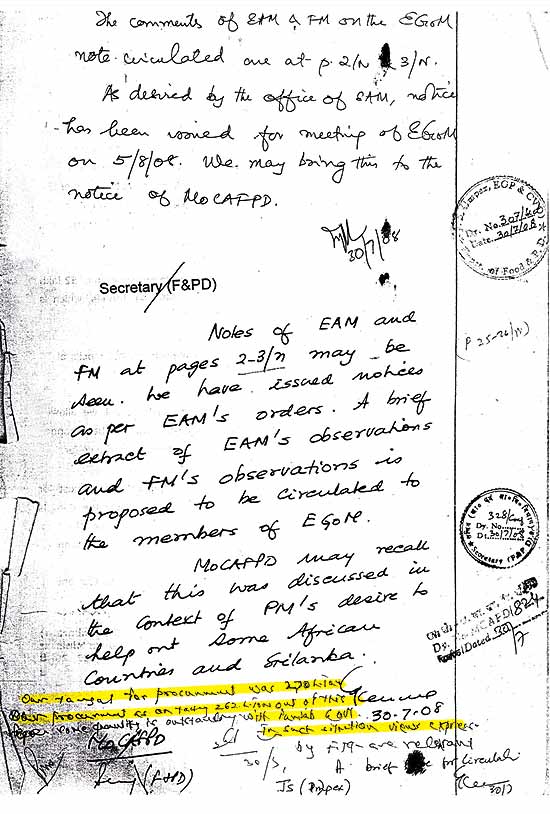 As the food ministry awaited clarifications from DGFT, there was a call from the then commerce secretary.

“I have reservations about the proposal,” Chidambaram’s note reads. “The note for the EGOM refers to an initial allocation of 2,25,000 tonnes of broken rice for sale to selected countries. However, paragraph 11 (a) 1 seeks approval for 2,25,000 tonnes of rice.... The rice budget shows that as against a buffer norm of 52 lakh tonnes as on 1-10-08, there will be 54.99 lakh tonnes, which is barely above the norm.... The country’s budget shows a reduction in private stocks of 15 lakh tonnes. In this background, it is difficult to support the request to export 2,25,000 tonnes to select countries. Once the door is opened, it would be difficult to turn down other requests.” In an earlier noting, dated April 22, 2008, Chidambaram had categorically stated that “no further requests from any country should be entertained for 2008-09”.

Chidambaram’s view found support from his cabinet colleague Sharad Pawar who held the twin charge of the agriculture and food and public distribution ministries. As such, Pawar could gauge the exact position of the availability of rice and the needs of the states for their PDS. In a note dated July 30, 2008, he concluded: “Our target for procurement was 270 lakh tonnes. Our procurement, as on today, (is) 262 lakh tonnes. Some quantity is outstanding with Punjab government. In such situation, views expressed by the FM are relevant.”

While Chidambaram’s warnings were “ominous”, a group of senior bureaucrats in the food ministry—led by the then food secretary, T. Nandkumar, and his two joint secretaries, Joy I. Cheenath and Siraj Hussain—too had been voicing their objections. These, however, were brushed aside as were the guidelines for exporting non-basmati rice laid down by the commerce ministry’s notification mandating that government agencies alone can export. This allowed private companies to trade in grain.

In fact, the commerce ministry was pushing the department of food and public distribution to send clearances for exports. A file noting by joint secretary Joy I. Cheenath, dated October 13, 2008, refers to a call from the then commerce secretary (now home secretary) G.K. Pillai. “There was phone call today from secretary, department of commerce,” Cheenath noted, “regarding notification of export of rice to four African nations.” The food ministry had been sitting on the notification because it had sought critical clarifications from the Director General of Foreign Trade (DGFT) on the issue of the minimum export price for these exports, but the DGFT had not reverted on these. The then commerce secretary’s call ensured that the notification was put up without the food ministry’s clearance.

This in itself was a major violation of the conditions set by the EGOM which had categorically stated that the decision to export would be taken only in consultation with the food ministry. The notification paved the way for a consignment to Ghana, to be routed through Amira Foods (I) Ltd, a Delhi-based company that was repeatedly favoured in the rice scam. This particular consignment was the subject of much controversy in Ghana, with its government launching an investigation and asking foreign minister Akwasi Osei-Adjei to depose before the National Bureau of Investigation. The Ghana authorities were looking into the diversion of rice to more lucrative markets. Ironically, the commerce and external affairs ministries in India did not factor in all this and cleared yet another consignment to Ghana.

So, did anyone raise the issue of such blatant violation of the DGFT’s rules? Not the DGFT. Both the joint director generals of the department of foreign trade, Vibha Bhalla and Hardeep Singh, remained silent on these violations.

Public sector enterprises such as the STC, MMTC and PEC chosen by the EGOM pointed out earlier this year that they were in no position to meet the guidelines laid down by the DGFT notifications, which in turn, were mandated by the EGOM. In a letter dated February 6, 2008, STC chief general manager S. Sarkar wrote to Cheenath pointing out violations in a proposed export to Madagascar.

“Our target was procuring 270 lakh tonnes but we got 262 lakh tonnes. As such, FM’s objections are valid.”
Sharad Pawar, Food minister

The Madagascar deal was manipulated to ensure that private companies would dominate a deal meant strictly to be a government-to-government transfer on humanitarian grounds. Sarkar pointed out that “under the above circumstances, it will not be feasible for STC to either purchase rice from the market from mills at a price around the minimum support price” or export it either, since the Madagascar government wanted to import through private companies.

Cheenath could not intervene as earlier letters from the commerce ministry specifically directed his ministry not to play a role in the actual exports. On May 29, 2008, Sarkar wrote another note, this time to Shyam Agrawal, an additional director general in the DGFT, pointing out that Delhi-based company M/s Shivnath Harnarain (I) Ltd would now export and earn the profits, with a meagre commission to STC. This too was ignored by the DGFT and the commerce ministry.

When the Opposition created a furore in Parliament over the rice scam in the last session, current commerce minister Anand Sharma promised an inquiry. Ideally, the inquiry into the scam should have gone to the cbi. Instead, the task fell on R. Gopalan, additional secretary in the department of commerce, the very ministry which perhaps facilitated the scam. Meanwhile, crippled by a poor monsoon, the commerce ministry is now seeking to import rice....