The force, it seems, is no longer with George Lucas Attack of the Clones fails to offer the same brand of unadulterated thrill and excitement as the Star Wars trilogy. 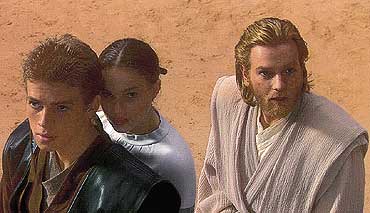 The force, it seems, is no longer with George Lucas. It'd be unfair to dismiss his latest fantasy in the face of the gross potboilers repeatedly mass-produced in Hollywood-Bollywood factories. But the benchmark for Attack of the Clones is the Star Wars trilogy and it certainly fails to offer the same brand of unadulterated thrill and excitement. Clones... is squarely for the devout followers of the Star Wars fable, who can make the necessary connections by going back and forth into the sequels and the prequel. There's a shared sense of discovery for the audience in identifying the abiding motifs and the ongoing themes of good against evil, of heroism and villainy and their curious similarities and affinities. It's fascinating to observe that Anakin Skywalker's (Christensen) murderous spree prompted by his mother's death in Clones... will lead him to eventually become the full-blown evil Darth Vader, that the forbidden love between Anakin and Padme Amidala (Portman) will result in the birth of Luke Skywalker and Princess Leia, who will, ironically, turn out to be the sworn enemies of their own father. It's this fore-knowledge that makes Clones... a textured, layered narrative. Take the resonant moment when Obi Wan Kenobi (McGregor) anticipates his own death at the hands of his protege Anakin: "Why do I get the feeling that you're going to be the death of me?" It's a death we've seen and participated in. Decades ago.

However, Clones... basically remains just another film with two plot strands: there are the secessionist solar systems breaking away from the Galactic Republic under the renegade Jedi Dooku (Lee), and there's the attempted assassination of Amidala, the Queen of Noobu who has now become a senator and is under Anakin's protection. The effort to underline the thin plot with allusions to democracy, dictatorship, separatist policies and campaign funds remains too simplistic and contrived. Lucas is a brilliant director of pixellated images and effortlessly pumps life into the robots, monsters and androids. The screen livens up when the digitalised little master Yoda takes on the giant Dooku. Genuine fun, expectedly, comes from C3PO as he literally loses his head at the clone factory. But his human co-actors remain inanimate. Which is the problem with Clones.... It makes you long for some human experience. The film is a great show of technical wizardry—magnificent in its scale, imagination and style. It's like hurtling into the frontierless space of a simulated ride which leaves you with a crick in the neck and a wish. A wish that our motion pictures could become moving images for a change.