The day Vishy took on Andy Roberts and won. 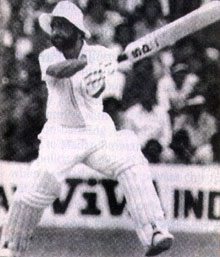 Though a team sport, cricket's greatest thrills come from one-on-ones; when two champions at the helm of their game pit their skills against each other. On January11, 1975 a crowd of 50,000-odd witnessed a special innings when master stylist Gundappa Viswanath took on Andy Roberts, West Undies' spearhead.

India had lost the first two Tests of the five-match series, but fought back to win the third, riding on Viswanath's 52 and 139 -top scores in both innings. Knit the fourth Test at Madras, India elected to bat, but in the absence of Sunil Gavaskar -go out injured - lost both openers early. Coming in at No. 4,Viswanath had only smut a few minutes at the crease when two more wickets went down.

Joined by Ashok Mankad, Viswanath began the counterattack. Two shots early in his innings were a sign of things to come when Roberts pitched one fractionally short, Viswanath got into position in a flash, swivelled on one leg and pulled to the square-leg boundary. A Little later, a

Mankad and Madan Lal departed soon- both to Roberts - and India were 76 for 6. With only the tail for company, Viswanath stepped it up a gear and, in the process, transcended the ranks of ordinary mortals. Using his wrists to impart power which belied his 5' 4" frame, Viswanath cut Andes flicked the West Indian attack to bewilderment. It was scintillating cricket.

Roberts continued the demolition job at the other end, taking two wickets in an over to reduce India to 117 for 8. But Viswanath found an able ally in Bishan Bedi, who scored 14 in a 52-run ninth-wicket stand. When BS Chandrasekhar walked out, Viswanath was on 77.

Shielding his No. 11 superbly, Viswanath scored 20 out of 21 runs for the last wicket, before Roberts dismissed Chandra to finish with seven wickets, leaving Viswanath unbeaten on a heroic 97. That Mankad's 19 was the next highest score in India's total of 190 indicates the stature of Viswanath's knock. He scored a vital 46~in~the second innings as India wrapped up the Test.

Wisden recognised the quality of this innings by ranking it 39th in its list of 100 best all-time innings -one of only two sub-century knocks to make the list. As in Viswanath's entire career, the sheer number of runs never told the whole story.