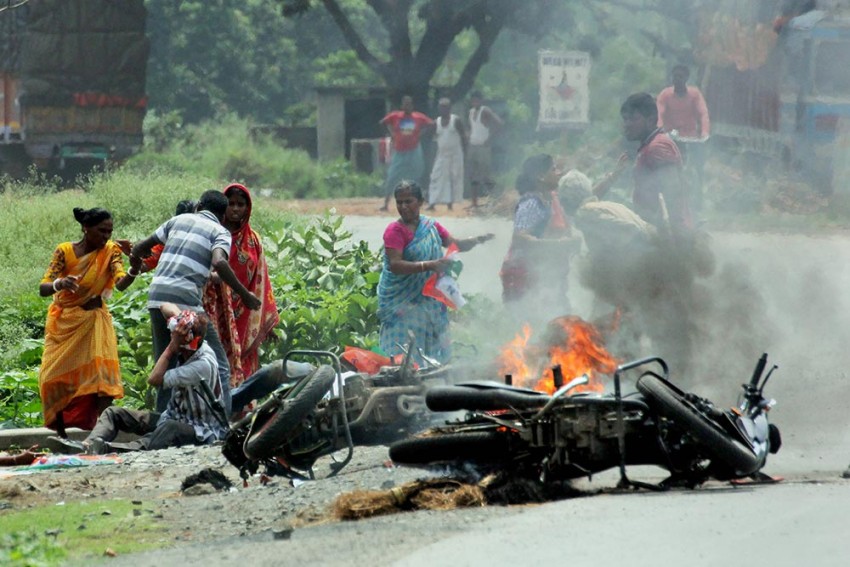 A vehicle burns, as the injured lie around during Bengal’s poll violence
Photograph by PTI
Dola Mitra May 16, 2018 00:00 IST Stamped In Cordite 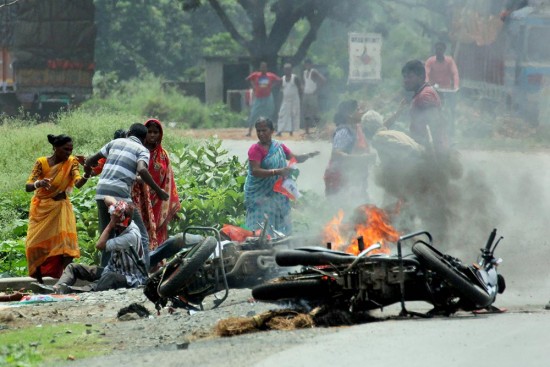 If morning shows the day, pan­chayat elections in West Bengal scrupulously followed the sanguinary script. Ever since polls were ann­ounced on March 31, Bengal had des­cended into a cycle of violence, int­imidation and chaos. The ruling Trinamool countered the litany of opp­osition complaints with bland denials, as the nomination process and final date of polling wound through a tortuous legal and political path. On May 14, the violence, as expected, reached a bloody crescendo. In all, 14 people lost their lives, including TMC members; hundreds were injured. Bombs were lobbed, sticks wielded with impunity, guns brandished to terrorise voters. Especial att­ention was lavished on ballot boxes—some were set afire, some prised open with pokers, others had water poured inside them. Still, an indefatigable 72.5 per cent of the electorate voted.

On the face of it, it was just a rural election. But if capturing power in  West Bengal is one of the avowed goals of the BJP, it has made poor progress in making itself count in the panchayat polls. “Any party which rules rural governments is in a good position to control the assembly and Lok Sabha elections,” political scientist Biswanath Chakraborty says.

An ambitious BJP, its rising clout in Bengal and post 2019 poll maths made this a must-win for Trinamool.

Consequently, in next year’s parliamentary elections, TMC is in a position to dominate the 42 constituencies if they control the panchayats. Which is why, as Trinamool leader Suvendu Adh­ikari had blurted out inadvertently, the party aimed for “an Opposition-free panchayat”. The goal is clear: the more members of Parliament, the more bargaining power it gives Mamata Banerjee in case of a hung parliament. But other, important stakes actuated the ruling party in their drive for a blanket control. Local administrati­ons rec­eive the bulk of the funds for the public distribution system, which makes it critical for the ruling party’s coffers.

Perhaps most significa­ntly, three years after Mamata captured power, the TMC’s political monopoly is under threat. If between 2011 and 2014 the party faced a highly diminished, and demoralised, Left and a Congress that was the runt of the opposition, there was suddenly an emerging force to deal with. The BJP, in control at the Centre and, through it, of institutions like the CBI and the NIA, was breathing down TMC’s neck over scams like Sarada and Narada. In fact, that the BJP had gained a foothold in Bengal was evident from its growing voteshare in ass­embly and Lok Sabha polls—from merely six per cent in  2011 to 17 per cent in 2016. The BJP’s victory in Tripura ass­embly elections too, according to sources, rattled Mamata. As she sees it, the scourge of the BJP was upon Bengal.

This is what explains the brutal desperation with which Trinamool tried to protect its turf in the villages and districts of West Bengal. The violence that spread through the state, claiming 19 lives in total, most of which has been laid at the door of ruling party thugs, is being called ‘unprecedented’. Veteran journalist Tarun Ganguly, who has covered elections in Bengal for over four decades, states, “In all the years that I have rep­orted on rigged elections, I have never witnessed the kind of bloodshed that has taken place this time.”

The results—counting takes place on May 17—say psephologists, are a foregone conclusion: indications are for a massive Trinamool victory. However, Chakraborty refuses to call the outcome of mass violence and rigging ‘results’. “Trinamool will most likely have won the elections anyway,” he says. Villagers attribute the success of public distribution schemes such as 100-day-work, Kanya­shree (a scheme for girls) and subsidised rice and grains to Didi (Mamata). “Still, the party was not confident of itself.” Chakraborty likens it to a bright student who cheats in order to pass an exam. But Mamata’s self-doubt is also an indication that the BJP is a perceived threat and political observers point out that the party squandered the opportunity to give Trinamool a run for its votes.

Taking a more pro-active line, or putting Central pressure against the month-­long preparatory violence, could have been a start. In that sense, it’s a missed opportunity for the BJP.