In a remarkable first, voters boot out an elected functionary 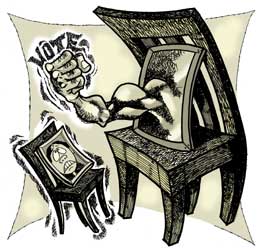 outlookindia.com
-0001-11-30T00:00:00+0553
It had all the trappings of a regular election—campaigns, public meetings, polling booths, charges of bogus voting et al. But what set apart the election in Anuppur, a one-horse town in Shahdol district of Madhya Pradesh, was the fact that there was only one candidate and two very eloquent symbols. One was a vacant chair and the other a chair with a woman seated on it. And the historical vote went overwhelmingly in favour of the unoccupied chair.

For the first time in India, people dismissed an elected functionary from office, marking the first exercise of the "Right to Recall" conferred by the state government. In the polling held on April 9, Pallavika Patel, 45, president of the nagar panchayat of Anuppur, was deposed by voters. "This will strengthen democracy. It'll make the people's representatives more accountable and sincere," was the reaction of CM Digvijay Singh whose Congress party Patel belongs to. "It's welcome, no matter who the loser is," echoes leader of the Opposition Gauri Shankar Shejwar of the bjp, adding that the bill was passed with a majority vote in the assembly.

While Switzerland is the only country that's given a similar right to its citizens, MP is the first, and probably only, state in India to have given the people the power to unseat the holders of public office in urban and rural self-governing institutions. Directly elected mayors of municipal corporations, presidents of municipal committees and nagar panchayats are covered by the provision. The process for the recall is rather long-drawn though. Firstly, no such move can be initiated till the elected functionary has completed at least two-and-a-half-years in office. A resolution endorsed by three-fourths of the corporators has to be submitted to the district collector for initiating the process. After verifying the authenticity of the resolution, the collector forwards it to the government which, in turn, asks the state election commission to conduct the polling. But there's a plus point for the people: even if 50 per cent of the vote goes to the functionary, he or she has to go; to remain in office more than 50 per cent of the vote is a must.

Patel was elected president in December '97. The no-confidence motion against her was passed in September last year. The collector forwarded the motion the next month and the election notice was issued on March 19. Almost 58 per cent of the voters turned up. Of these, 63 per cent wanted her to demit office. "When I was elected, 25 per cent of the votes were in my favour. This time, 34 per cent came to me. Tell me, have I become more popular or less?" she asks. The difference, of course, is that when elected, she was one of the 19 candidates and could scrape through with even a quarter of the votes, but in the recall, she was the sole candidate in the fray. But the distinction doesn't impress her. "Name one leader who can be confident of the support of at least half of the voters. This way, even Digvijay will lose," she argues.

Ironically, Patel enjoys a clean image in the area and seems to have taken some steps to better the civic infrastructure of the town. Then why the resentment? "It's impossible to please everyone. The corporators wanted their dues to the nagar panchayat waived. Everybody who mattered had some vested interest, and when I refused to co-operate, they turned against me," she says. The factional politics in the Congress party in the district also added to her woes. She owes loyalty to Bisahulal Singh, a member of the state council of ministers.This made her a target of the ire of Congress mla Shabnam Mausi—the first eunuch in the country to be elected to the assembly and a factional opponent of Singh. "Like Abhimanyu, I was caught in a chakravyuh," says Patel.

She also complains she wasn't allowed to campaign by Shabnam Mausi and that the administration's attitude was hostile. "My polling agents were not allowed inside the booths," she says. The collector of Shahdol, Pankaj Agarwal, however, disagrees with the charges. "There is no provision for polling agents in this election. It is an issue between the government and the candidate and polling agents are not needed," he explains.

A similar resolution calling for the recall of its president was passed by the municipal committee of Sanchi near Bhopal in March last year—almost six months before Anuppur did so. But the government is yet to follow this up with elections. And that illustrates the fact that voters might not always find 'empowerment' so easy to come by.

Shridhar Patidar's seeds have blossomed forth in arid Dhar