A suicide note in Karnataka claims to show how the rich manage black money. Can Jan Dhan accounts be a leveller? 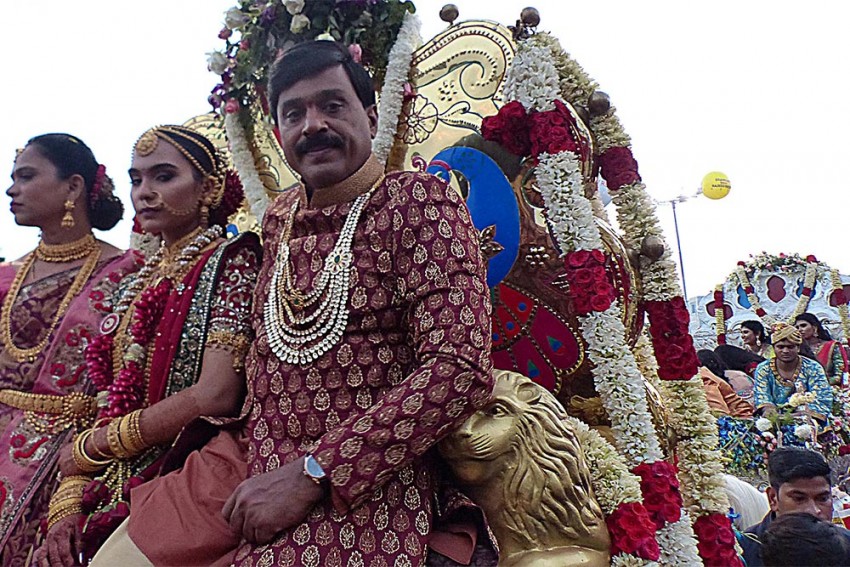 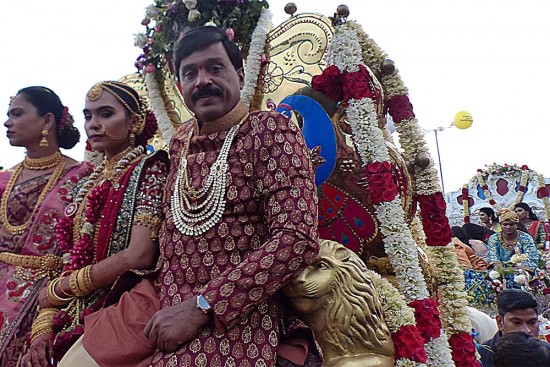 They say you can’t talk to the dead, but Ramesh Gowda is certainly speaking from his grave. Bellary’s driver, if one can call him that, left a suicide note acc­using the former BJP minister in Karnataka, Janardhan Reddy, and the man he worked for, Bheema Nayak, of breaking laws, including money-laundering. Gowda, alive, drove special land acquisition officer Nayak around Bangal­ore. Dead, he talks about the death threats he received for what he claims to have known: of bungalows bought and sold, corruption cases filed and withdrawn, and, more topically, about a Rs 100 crore currency stash belonging to Reddy that he says the high-and-mighty allegedly laundered into valid denominations post November 8. Reddy, who was once put behind bars for illegal mining and is out on bail, held a stupendously lavish wedding for his daughter in Nov­ember. The total bill? Reportedly Rs 500 crore.

The way the fight against black money has progressed since then, it has come to be widely accepted that many people have taken to jugaad in its various forms, using banks to wriggle through the barriers of law that the government has recently created.

It’s unethical to deposit, or accept, unaccounted cash, but it’s no effective redistribution of wealth even if Jan Dhan holders keep the money, says Arun Kumar, an expert.

The banking system is said to be at the forefront of this crisis, something that Gowda claimed to have got a chance to witness first-hand. It is knowledge that led to him being targeted, harassed, his note says. This came close on the heels of a  Enforcement Directorate crackdown on Axis bank employees in Delhi who allegedly laundered Rs 40 crore. Just last week, the PM had said that even Jan Dhan account holders who have received unaccounted cash from others need not return that money. The government would find a way to punish those who deposited such unaccounted cash in anybody else’s account, he said. Critics claim that this proposal, in a way, is as good as saying that you can wrong a person who has wronged the system.

This is what Pronab Sen, former chief statistician and country head of International Growth Centre, finds hugely problematic. “Legally, what money lies in your account is your money, so what has been said with respect to Jan Dhan account holders is not a legal but an ethical issue,” he says. This is because a lot of the cash that is going into Jan Dhan accounts is money given by people on the basis of trust. Even if local moneylenders do such transfers, it is with the understanding that it will be returned.

Then again, there are some who don’t have bank accounts. Their deposits in Jan Dhan accounts owned by others are also based on trust. “In all these cases, if you say the money can be kept by account holders and not returned it amounts to monetising a human relationship. Not just that, you are also destroying trust, hitting the foundation of human society,” says Sen. 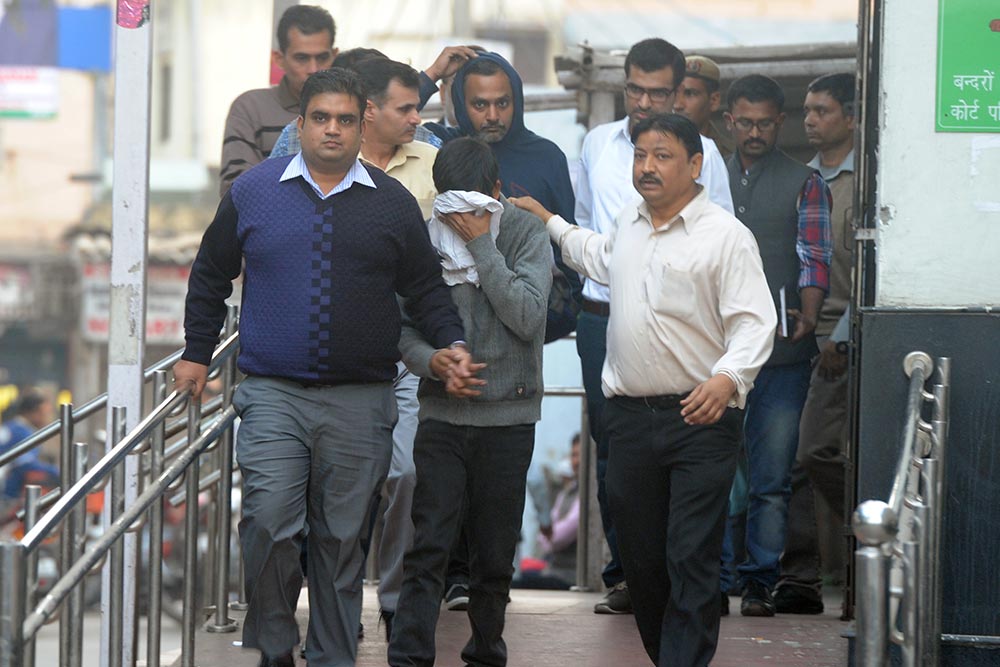 Axis Bank employee being produced in a Delhi court

To be clear, there’s nothing illegal in tra­nsferring money to another person’s bank account. This is so even if the cash is unaccounted for. “Some see the cash transfers taking place since the demonetisation as a way to get their comeuppance. They feel the rich are getting their just deserts. That is understandable. But if they themselves benefit from it then they are gaining more than just an emotional high,” Sen says.

He refers to the cash reportedly being doled out or promised to those with Jan Dhan accounts. Some have been paid salaries in the older denominations in advance; some have simply been assured of compensation for accepting deposits. Either way, ethical questions abound on all sides.

The latest figure for the demonetised currency deposited into banks since November 8 is Rs 13,20,000, crore, or most of the Rs 15,00,000 crore in the withdrawn denominations. Of these, Rs 64,252 crore, a fraction of the overall amount, has landed into the roughly 28 crore Jan Dhan accounts. “Ethical questions arise on all sides, but much is being made of the small amounts deposited in Jan Dhan accounts,” says business historian Raman Mahadevan. “To earn and not pay taxes on income is unethical, to use accounts of the poor is too,” Mahadevan says. He feels that what is being witnessed reflects the absolute vulnerability of India’s poor, who have few stable opportunities for sustenance.

“It is unethical to deposit unaccounted cash and also to accept it. But it is no effective redistribution of wealth even if Jan Dhan account holders keep the money. This is because the amount deposited in such accounts, on average, is hardly significant,” says Prof Arun Kumar, a black money expert and formerly professor at JNU in Delhi. While estimates vary, the deposits on average add up to Rs 13,113 per account on December 2.

Kumar believes that their small size is one reason why most of the money in Jan Dhan accounts will revert to actual owners. “Even if the prime minister says ‘this is now your money, don’t return it’, people will, for they have kinship ties with depositors. Some may refuse to return it, but I suspect that will lead to violence against them, particularly in rural areas where overlords abound and power equations are deeply unequal. So, this call by the PM reflects what the government faces—failure of its demonetisation exercise,” he says.

The same goes for the hefty probes being proposed now against banking officials. “Yes, banks have worked in collusion and there should be strict action against corruption. But the question remains, how many accounts can the government probe, seek, seize and raid,” says Kumar.

Then there’s the question of how much money deposited into others’ accounts is, strictly, an illegal stash.

Rahul Nagar is a young man living in Prempuri, a shanty-like settlement in one of Delhi’s satellite towns. He deposited chunks of Rs 49,000—money his father earned from running a dairy for over two decades—in Jan Dhan accounts of subordinates and friends. One such person is his aunt’s tenant, Shaligeram Thakur, who has rented from the family a small single room, minus a kitchen or a toilet.

“My brother is to get married in February and we are constructing a room for him. To keep the construction going in these times of limited cash withdrawals, I deposited money in different accounts of people I trust. All of it put together won’t add up to Rs 2.5 lakh, which we are anyway allowed to deposit, no questions asked,” Nagar says. Though his father has a bank account, he never used it, unaccustomed as he is to holding money in any form but cash.

Thakur, a 21-year-old engineering student, unwittingly got his Jan Dhan account frozen the moment he deposited the Rs 49,000 on behalf of Nagar. The freeze has left him penniless and unable to access even the Rs 17,000 balance in his account. “People have millions, billions, stashed, but I took a pocketful of money (from Nagar) to the bank and they blocked me from accessing it,” Thakur says. He is distraught, for he was unaware that a total deposit limit of Rs 50,000 into Jan Dhan accounts was in place since November 15. “The bank teller acc­epted my cash and then told me that my account’s limit was exceeded. Then he told me my account is blocked until January and there’s nothing he can do about it.”

Since that day a week ago, neither has Nagar’s construction work resumed nor has Thakur had any money, not even for food. “My brother lives nearby and I go to eat at his place,” he says.

This action by the bank, coming at a time when rules are changing by the day, in itself raises ethical issues. “It is illegal to block accounts without legal sanction or without instituting a formal case. It amounts to creating a state where the banks are violating the law of the land,” says Sen.

In a country with wide income and social disparities, affording the poor the vicarious pleasure of watching the relatively wealthy worried sick about their ‘ill-gotten stash’ is a bold political move. The caveat is, this mass schadenfreude might dissipate if the economy starts to face the functional impact of demonetisation.