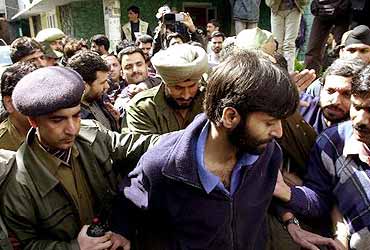 outlookindia.com
-0001-11-30T00:00:00+05:53
Yasin Malik’s dramatic arrest and detention under POTO last Monday has left large sections of Kashmiris unimpressed—not many are willing to buy the hawala charges levelled against the JKLF chairman and senior All Party Hurriyat Conference leader. Residents in Srinagar are finding it difficult to swallow the government claim that $1 lakh recovered from a couple on the Srinagar-Jammu highway, while on their way back from Kathmandu, was indeed meant for Malik.

Malik, a veteran of Indian prisons and a heart patient, was taken into custody while addressing a press conference at the Hurriyat HQ in Srinagar, within 24 hours of the arrest of the couple who, it has been claimed, was carrying the money for the JKLF chief. The two, identified as Mushtaq Ahmad Dar and Shazia Begum, were arrested near Kud while they were travelling in a mini bus. Police claimed to have recovered the money in cash from Shazia, which was stitched into the lining of her salwar.

Official sources say Malik asked Mushtaq Dar, a JKLF activist, on March 5 to go to New Delhi and get in touch with Altaf Qadri of the JKLF’s PoK wing. Dar apparently called Qadri on his phone (0092514440276) and was told to reach Vishal Bazar gate in Kathmandu on March 21 at one in the afternoon. Qadri, a former resident of Srinagar, left for Iran in ’95 on a valid passport. He slipped into Pakistan eventually, and has made it his operational base since.

Interrogation of the suspects has led the investigators to conclude that the money was collected in the US (and the UK) by migrant Kashmiris and was meant for two purposes—to fund the Hurriyat’s so-called election commission as well as the JKLF, which has found itself increasingly in need of finances after the ISI, increasingly suspicious of its pro-azadi line, starved the JKLF of funds. Sources say that Altaf Qadri, Dr Zafar Mehdi (one of the Hurriyat’s proposed election commissioners) and Yasin Malik were in the US last year in September. Malik’s trip was bankrolled by a wealthy Washington-based JKLF activist, Osman Rahim, who runs an NGO—the Council for Independent Kashmir—and is a major fund-raiser for the JKLF. Rahim is even alleged to have visited Kashmir a couple of times in the last two years. Apparently, the idea for the election commission was his brainchild which Malik borrowed. The Hurriyat too later adopted it, though it was initially sceptical towards the idea.

Government sources in Delhi claim that the crackdown on Malik, as well as the subsequent raid on the Hurriyat’s Delhi office, is exemplary and is meant to show the government’s serious intention to throttle the illegal channels of finances, huge amounts of which continue to pour in. In this particular instance, the money was channelled through Pakistan with the help of a courier. Home ministry sources say that it would take up the matter of continuing hawala activities in the US and the UK. After the 9/11 attacks on the WTC, processes are being put in place that will make it difficult to finance "terrorist" activities. And the government is likely to make the case that since what is happening in J&K is not a "freedom struggle", the US would be obliged to make such fund collection an illegal activity.

Malik has, however, dismissed the charges and vehemently maintains that if proved, he’d quit politics. He claims he has never seen or met Shazia and that he had not kept in touch with Mushtaq Dar who had quit the JKLF some years ago. Malik also refuted the claim that Qadri had ever visited Nepal in "the last seven years".

It is not the first time that the government has charged separatist leaders with receiving money from across the border or other foreign sources. But this is the first time action has been taken. However, the police’s ‘eagerness’ (booking Malik in the middle of a press conference) strengthens the suspicion in the Valley that the JKLF leader has, in fact, been framed and that he is being victimised for political reasons.

Malik has vociferously rejected the idea of participating in the electoral process in the state. His arrest testifies to the frustration within the government of having got nowhere in getting the Hurriyat leaders to endorse the electoral processes due before October this year. This, despite half-way efforts to gain their confidence, beginning with their release from prison in 2000, after the Clinton visit. It is reported that the Bush administration expects the Hurriyat to participate in the elections. Whether this can happen while Malik is in prison is debatable.

Zafar Miraj in Srinagar with V. Sudarshan in New Delhi