Hunted out from Indian grasslands, the cheetah may tear across the landscape again 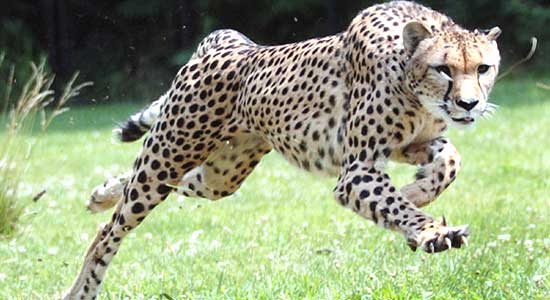 Other Big Cats In India

Should The Cheetah Be Brought Back From Extinction?

Bringing back an extinct species sounds like a Jurassic Park kind of venture, more worthy of our cinema screens than our wildlife reserves. But that’s the ambitious plan Jairam Ramesh endorsed last month, a triumphant trumpet blast, presumably to herald more exciting things to come, in the pursuit of his still-new calling as Union minister of environment and forests.

“The cheetah is the only animal to have been declared extinct in India in the last 100 years. We have to get them back from abroad to repopulate the species here,” Jairam had said then. The minister has now taken matters further by asking the Dehradun-based Wildlife Institute of India (WII) to suggest six possible sites for reintroduction. His action follows a meeting convened in Gajner by the WII, which concluded that this dream—to see the cheetah racing across our grasslands once again—can (and ought to) be fulfilled.

“The Desert National Park in Rajasthan can house the cheetahs, but nearly 70 villages have to be resettled.”

“It’s not a final course of action,” admits WII chairman Dr M.K. Ranjitsinh, “But after preliminary surveys we have concluded that it’s feasible.” While previously, there had been talk of captive breeding, the emphasis has now shifted to translocation of cheetahs; not from Iran, where their numbers have dwindled to below 100, but from Africa, where there are said to be 12,000 spread over 25 countries. There is some scepticism about bringing the African cheetah to grasslands where its younger descendant, the Asiatic cheetah, once roamed. But Ranjitsinh counters, “The greatest authority on DNA analysis in wildlife, Stephen J.O. Brian, told us there should be no objection, genetically, to bringing in African cheetahs.” However, the plan will need to be fine-tuned. “Before we formally present this plan to the ministry, we’ll need to do some further, detailed investigation of the release sites,” says Ranjitsinh. 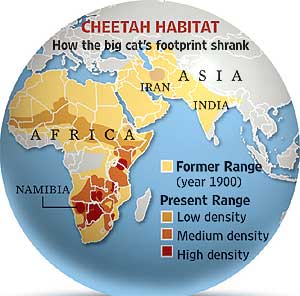 Just a couple of hundred years ago, the cheetah was zipping across grasslands extending through the length and breadth of India, from Chhattisgarh to Tamil Nadu and Kerala. Quite unusually for a big cat, the cheetah is docile and gentle, easy to tame. In the 1500s, the Mughal emperor Akbar had more than a thousand stowed away in his shikarkhanas to help catch the preferred prey—blackbucks—on royal hunts.

A film shot as recently as 1939 depicts one such royal hunt: keepers get on to bullock carts, their cheetahs on leashes. The carts trundle along the plains to the grasslands, where the cats are offloaded in the midst of blackbuck herds. They are allowed to chase down and tumble around in the dust till they have a grip on their prey’s delicate neck. At which point, to their utmost indignation, hoods are unceremoniously pulled over their heads, the neck of the deer is slit, and they are left the paltry trophy of one bony limb of the dead animal.

Owners kept their cheetahs well, regarding them as feline versions of their hunting dogs. But the animal’s near-inability to reproduce in captivity contributed to the depletion in their numbers. Moreover, the hunter was also the hunted, thanks to the colonial fashion for cheetah-fur coats, rugs, and “shikar trophies”. Many a colonial officer has written shocking accounts of blasting off the backs of graceful cheetahs tranquilly loping through a clearing; or boasted, with “manly” pride, of bearing down on them on horseback and spearing them.

The trophy of shame for the most low-down, wicked act of cheetah destruction goes to the Maharaja of Surguja (a principality in eastern MP)—who also killed 1,360 tigers. While motoring through the countryside one night in 1948, he chanced upon three cheetah siblings sitting together. Gleefully blinding them with his headlights, he shot them down on the spot at close range and photographed himself with his “trophies”, which were quite possibly the last surviving cheetahs in India, aside from a stray, unconfirmed sighting in 1968.

Since it was arrant human villainy that was responsible for the cheetah’s disappearance from India’s grasslands, talk of bringing it back has a redemptive ring to it. That’s why it has attracted a rainbow coalition of supporters, including, in 2003, ambitious scientists (of the Centre for Cellular and Molecular Biology) looking to clone a Dolly that roars—or at least, makes a low, “sawing” noise, as cheetahs do. The scientists failed—and not just because Iran turned down our request for genetic material. Their plan was aborted when other scientists and ecologists denounced the arrogance of playing God, and the foolhardiness of the expensive venture: no wild animal had ever been successfully cloned before.

This time around, the plan sounds somewhat more plausible: suitable re-release sites would be shortlisted, and when they were made secure, a closely supervised ‘soft release’ would be conducted of cheetahs procured from Namibia. “We’ve lost a species, we should try to bring it back,” asserts Divyabhanusinh Chavda, trustee of WWF-India and author of the book The End of the Trail: The Cheetah in India. “Let’s bring them from Namibia; they’re being shot there anyway. It will also help conserve the grasslands, they’re in a semi-degraded state.” 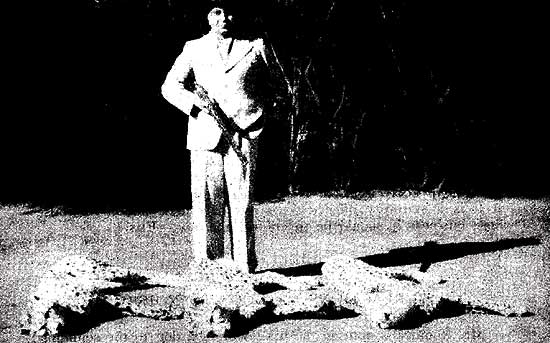 The maharaja of Surguja with his triple bounty: were these the last Indian cheetahs?

That, some conservationists would argue, is putting it mildly, considering most of India’s grasslands have turned into farmlands or human settlements. “Is the area even available?” asks Ravi Chellam, head of the Wildlife Conservation Society. “That’s why we need to conduct a solid, well-conceived field survey, assessing availability of suitable habitat and prey animals, and inventorying human use. Without this, if we introduce a predator in a country teeming with livestock, we’re opening a Pandora’s box of new conflicts.”

Asad Rahmani, head of the Bombay Natural History Society, is more sanguine. “The Desert National Park of Jaisalmer-Barmer would do, but it has nearly 70 villages and settlements which would need to be relocated. That’s politically unfeasible. Shaka-Bulge in Jaisalmer has pure grasslands too, but the military might object as it’s near the border.”

Dr Ranjitsinh, for his part, is convinced that a resoundingly positive answer is possible for every one of these questions. “It’s just the beginning of a process. But it’s a very heartening one.” We can only hope he’s right.