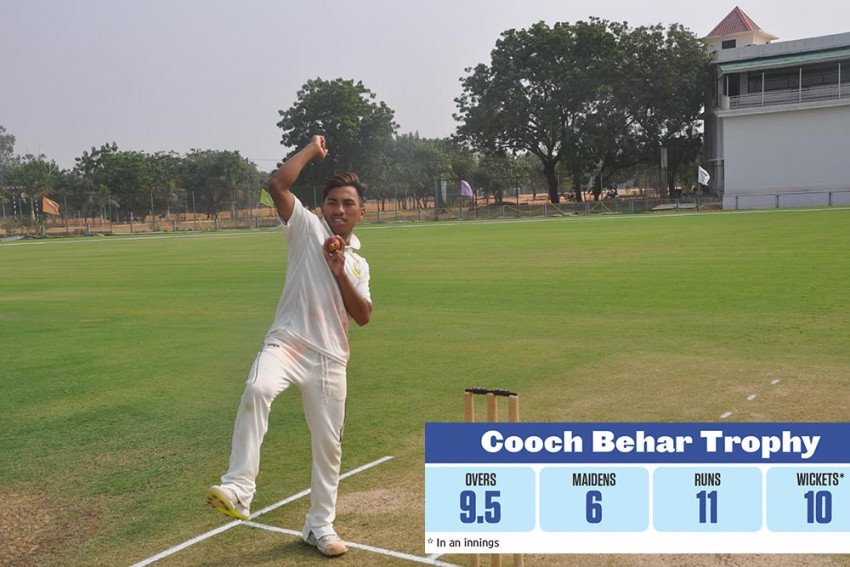 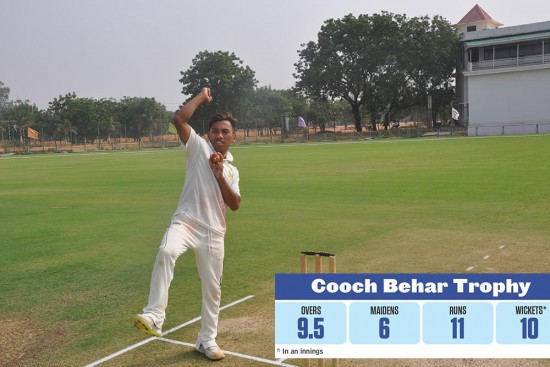 Strangely mystifying are the ways of fast-bowlers—a breed within the breed of cricketers. When Rajkumar Rex Singh doesn’t get to sleep at night, he takes eight wickets in an innings the next day. When he sleeps soundly, he takes all 10! Well, that’s what happened on Octo­ber 5 and December 12, that took the Man­ipuri into the record books, alongside legends Anil Kumble, English off-spinner Jim Laker and his compatriot Sidak Gurvinder Singh.

On October 4, soon after a Vijay Hazare Trophy match concluded against Bihar in Nadiad, Gujarat, Rajkumar, a talented left-arm pacer, took a taxi to reach Baroda, covering 60 kms. From there, he took a flight to New Delhi for an 811-km journey. From Delhi, he took another flight, the long hop to Bhubaneswar (1,743 km). He reached in the morning, and headed to the team hotel, where he nibbled at some breakfast, before leaving for the match against Pondicherry in the under-19 Vinoo Mankad Trophy. He had hardly slept in 24 hours. The “very tired” and jet-lagged 18-year-old made little of such vagaries of a sportsman’s life. The sight of the pitch, and that of the opposition batsmen, goaded him on, as he snatched an eight-­wicket haul at the Railway Stadium on October 5.

As if dissatisfied with an ‘eight on ten’, Rajkumar made history on December 12 with that rarest of feats—dismissing all 10 batsmen in an innings. Standing at a slight, but wiry, five-foot-three-inches, the left-arm seamer cast a spell on the Arunachal Pradesh batsmen with his viciously dir­ected in-swingers and yorkers that would have made Imran Khan proud. The batting team seemed clueless before the moving ball and handily skiddy pace, mustering a mere 36 in an under-19 Cooch Behar Trophy match. Rex’s figures of 9.5-6-11-10—with six maidens—propelled Manipur to a 10-wicket win in Anan­tapur, Andhra Pradesh. He took five wickets in the first innings, for a match haul of 15 for 44. A star is born.

“I was asked to reach Bhubaneswar from Nandiad the next day, so the little sleep I got was only during the flight. I felt sleepy on the ground the next day. But I ended up taking eight wickets for just three runs [4.4-2-3-8],” Rajkumar tells Outlook in a satisfied tone. And he sounds ecstatic about the 10-wicket haul; incredibly, five of those scalps were clean bowled. “It was the happiest moment of my life, and I ran all over the park. I rem­embered my parents; if present, they would have been very happy. My teammates supported me a lot,” he says. A hat-trick beckoned Rex thrice during his spell, eventually he could convert one, as Manipur comfortably won the four-day game inside two days at the Rural Development Trust Stad­ium in Anantapur. Incid­en­ta­lly, Mahaboob Basha of And­­hra had also grabbed a 10-wicket innings haul, aga­inst Tripura in the Cooch Behar Trophy in 2009-10, at the same venue.

Thirty-nine days bef­ore Rajkumar’s complete demolition job, 19-year-old left-arm spinner Sidak of Pondicherry had picked up all 10 wickets in an inni­ngs [17.5-7-31-10], against Mani­pur in under-23 CK Nayudu Trophy at the Siechem Ground in Pondicherry.

Besides these two towering feats, Rajkumar has turned in several remarkable spells this season, inc­luding a seven-wicket innings haul against Sikkim in a Cooch Behar Trophy tie in Anantapur. Overall, he bagged 10 wickets in the game and scored a patient 61 off 141 balls that played a vital role in Mani­pur’s 10-wicket win.

Rajkumar’s father, a truck driver from Sagolband Moirang Hanuba village in Imphal district, wanted him to play an individual sport. So, he initially played a bit of taekwondo before giving in to the seductions of cricket fully. Former India pacer Balwinder Singh Sandhu polished Rex’s bowling at a BCCI camp at the National Cricket Academy in Ban­galore. “His intensity level and attitude are good; he’s aggressive as well. His legs and back, which are so crucial for a pace bowler, are strong as he lives in a mountainous region,” Sandhu tells Outlook.

Rex, till now, doesn’t have express pace, or a signature leap—not always necessary to bowl fast—before the delivery stride but he makes up for all that with his skill, notably his prodigious in-swing. Due to his ‘mixed bowling action’, he may not be able to gain great speed, but can surely catch leaden-footed batsmen with his swing. “He has a mixed action [not copybook] and due to that he would be okay if he bowls up to 130 kmph. If he tries harder he may incur injuries; he can only be a swing bowler. The trainer has told him to de certain exercises,” Sandhu informs.

His childhood coach, Pheiroizan Rohindro, knows Rajkumar inside out. “He has a natural in-swing and also has a good leg-cutter, though he uses it less often. He has the ability to take wickets and he works hard on his fitness despite not having a personal trainer,” says the man who identified Rajkumar’s talent when he played tennis ball cricket for his academy.

“A left-armer who swings it like a banana is special. His loading is close to his body, helping in swing,” says former India seamer Irfan Pathan.

Manipur under-19 coach Ranjit Sharma, who doubles up as a selector, points out a few more facets of Rajkumar’s game. “He swings the ball more when he bowls slower, when he can control his speed. He is a brilliant fielder who can field at any position, but he likes to be at mid-off and cover. He’s a good catcher as well,” he says.

Former India seamer Irfan Pathan, with whom Rex is being compared for his prodigious swing, says he has a bright future. “Swinging the ball is an art and a left-armer who swings it like a banana has to be special. His loading is close to his body, that helps in swing.” On Rex’s lack of speed, Pathan says, “Gone are the days when batsmen would be scared of speed. Today there are well protected by gear.  Now it’s what the ball does in the air and after pitching, as we are seeing in Australia.”

During the ongoing domestic season, Rajkumar also made his first-class debut when he appeared against Sikkim in a Ranji Trophy game in Cal­cutta. After playing one more match, the selec­tors recalled him to the age-group tournaments.

With Rajkumar busy playing cricket, he has had limited time for studies. Last year, he missed his class XII exams, something he wants to clear soon. “I want to be a policeman, but I guess I won’t be able to become one as I don’t get time to study in order to crack the police service exams,” he rues.

Sidak’s life and career has a more planned look compared with Rajkumar’s. He was born in Var­anasi, Uttar Pradesh, the son of a cloth merchant, but on advice of his mentor, Salim Sheikh, migrated to Mumbai, where he was admitted to Rizvi School, famous for producing cricketers. Coach Vinod Raghavan worked on Sidak’s game, and soon the teenager broke into the Mumbai under-14 team, and represented its under-16 and under-19 teams too. In 2014-15 season, Mumbai picked him for the T20 Syed Mushtaq Ali Trophy tournament. But selectors brought him back to age-group cricket, and this season he emulated Kumble and Laker by taking all 10 wickets in an innings, which helped Pondicherry—which he’s representing as a guest player this season—register a seven-wicket win.

“Only after I took the ninth wicket did I think that I could take all 10. Luck was on my side and the other bowlers helped as well. Also, the fielders took some good catches off my bowling, particularly at close-in positions,” the second year commerce student tells Outlook.

The 10-wicket haul has put Sidak under sharp focus. It is now up to him to build on this success, yet put the grandness of all that behind him. Raj­k­umar is in the same ark as Sidak. The next few years are crucial, blossoming ones for them. Let’s hope these pages celebrate their adult exploits too.