Is Cricket The Perfect Tool To Foster Diplomacy? An Emphatic Answer Is Still Awaited

India and Pakistan have used cricket to mend ties. The threat to boycott a World Cup match after attack on Indian security forces in Pulwama was a new tactics 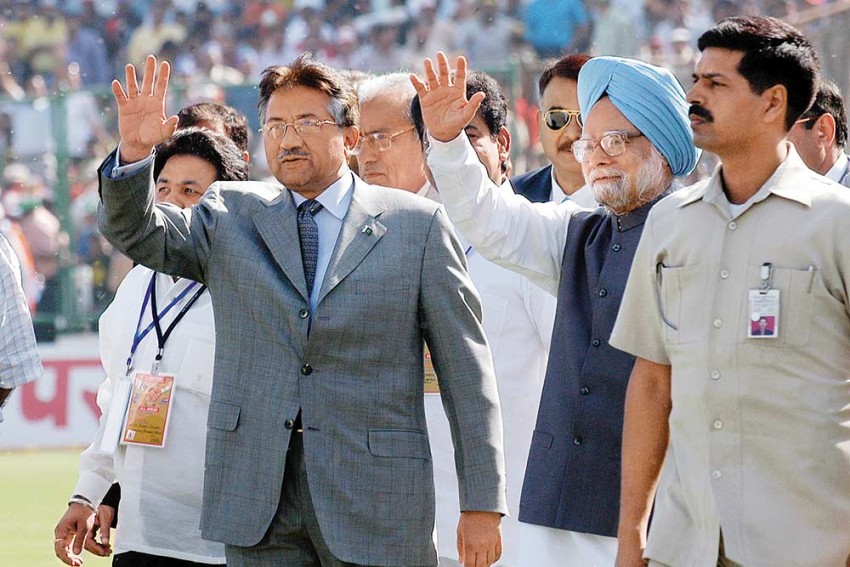 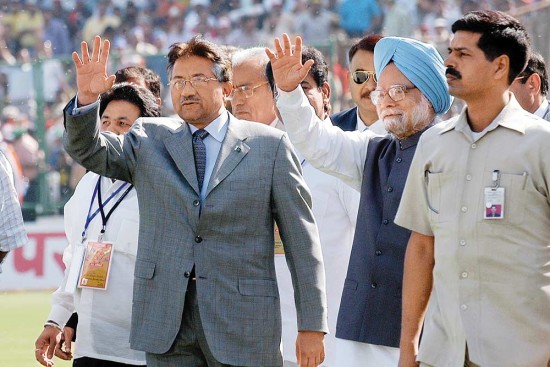 Cricket—the very word conjures up a serene winter’s day…the plucky exploits of men in white…windscreens billowing in the wind…the ‘plock’ of bat meeting ball…wild cheering of spectators…the lengthening shadow creeping across the ground in harmony to the waning sun (rain-spl­o­tched English summers be damned)…. Yet, with its increasing hold on people, this idealised arcadia took on the contours of faith; when bands of eleven ‘represented’ countries, patriotic pride and its hand­maiden, nationalism, rea­­red its head. When ‘incidents’ and contro­ver­sies on the field went out of hand, statecraft had to be deployed to stanch the flow of passion. On the other hand, diplomacy has taken recou­rse to cricket, to use its immense goodwill and its incredible reach into every nook and cranny.

Elements of all this can be plainly seen as the ICC Cricket World Cup 2019 edges to its mid-point: the colourful fervour, raw emotions, exem­plary sportsmanship and…controversies. Last week, the Inte­rnational Cricket Council (ICC) officially requested the BCCI to have the small insignia on Mahendra Singh Dhoni’s gloves to be removed. An honorary lt. colonel in the parachute regiment of the Territorial Army, the dagger with the wings insignia is similar to the para forces’ badge, and therefore in breach of the ICC regulations that players can’t wear anything that is related to ‘political, religious or racial act­ivities or causes’. Indeed, shades of politics have always coloured cricket, despite efforts to keep it clear of its innate political undercurrents.

Though ‘cricket diplomacy’ is a much-implemented soft power tool in South Asia, specifically involving India and Pakistan, the game’s most heartwarmingly positive influence in recent years has to do with the Afghanistan national team, whose mature display of prodigious talent belies its cricketing infancy. The Soviet invasion in 1979, the Mujahideen fightback and victory, the Taliban asce­ndancy and their post-9/11 defeat and vicious struggle against US-led forces meant Afghanistan remained a war-torn country for decades, with many of its brutalised populace spilling over its borders in Pakistan, housed in camps in Khyber Pakhtunkhwa and in Karachi. Consequently, cricket was the predominant sport that was played in Afghan refugee camps in Peshawar. From all accounts, the game had been as much a psychological coping mechanism as physical activity. A unifying medium to mould nationalist identity, in the 2000s Afghanistan went about installing the formal framework to form a national team; by 2017 they were awarded full member status by the ICC. 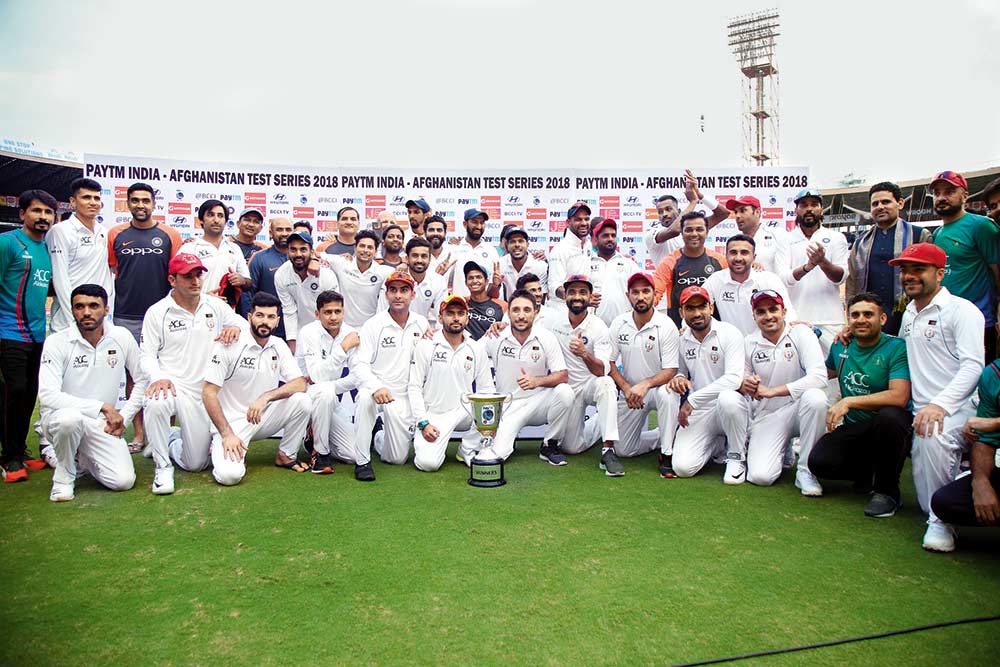 The Afghan and Indian teams at the former’s first Test in Bangalore in 2018.

Last year, at its historic first Test series against India, both Prime Minister Narendra Modi and Afghan President Ashraf Ghani’s opening statements identified the sport as a unifying force, noting the Afghanistan team’s nation-building pot­ential in the face of “challenging and difficult circumstances”. India, too, has granted Afghanistan the use of the Greater Noida stadium outside Delhi for training purposes, and an additional facility in Dehradun, Uttarakhand, along with $2 billion in developmental programmes.

Evolutionarily speaking, sports are a practical means of channelling aggression through less violent outlets. It is in maintaining this precarious balance that makes cricket, steeped in colonial history, a suspicious vehicle for peddling peace. Yet, India and Pakistan have often used cricket as an extension to the talks table, as a means to break ice.

“Cricket has always played a crucial role in bilateral India-Pakistan ties. In 2004 when we toured Pakistan, the team was excellently welcomed and experienced much warmth from people. The fact that the boys were playing a crucial role as ambassadors was not lost on them and they behaved in accordance,” says former cricketer Kiran More who was chairman of the selection committee then.

If the 2004 ‘Peace Tour’ was a notable example of then PM Atal Behari Vajpayee using cricket for int­ernational diplomacy, a similar programme had been previously attempted in 1979 under the Morarji Desai government, where Vajpayee was foreign minister. In 2004, as attempts were made “to establish peaceful, friendly and cooperative rel­ations”, including the Samjhauta Express resuming operations, it was thought that the Indian team’s tour of Pakistan would bolster amity. Perhaps that’s why on the heels of a momentous tour with Aus­tralia, the Men in Blue had to embark on another one with Pakistan. It was a resounding success.

India and Pakistan have used cricket to mend ties. The threat to boycott a World Cup match after Pulwama was a new tactic.

While a cricket tour between the two nations elicited sportsmanship—much of which ripened into lasting friendships—among the players, it wasn’t always the same for fans, spectators, even occasionally the political class. In 1952, when Pakistan first toured India under the captaincy of Abdul Hafeez Kardar, it was to a tense welcome. Two years later, when India reciprocated that visit under the leadership of Vinoo Mankad, the reaction was equally circumspect. National feelings post-1947 had seeped into cricket, with passionate fans on both sides of the border regarding a match as proxy war. The wars of ’65 and ’71 forced a gap of 17 years when the two countries didn’t play each other. Only in 1978 did cricket resume, becoming a driving force for bilateral goodwill. India-Pakistan ties, as is known, moves in cycles. A further diplomatic use of cricket was availed of by former president Zia ul-Haq in 1987, during Pakistan’s tour to India. After a lukewarm ’90s, cricketing ties snap­ped after the Kargil conflict in 1999, to be lifted in the noughties. However, that wouldn’t last: political compulsions meant an ice age was to clamped down again—something that continues. Sur­ely, the repetitive start-and-stops in India-Pakistan cricket relations have made the sport the unofficial barometer measuring ties between the states.

Because of international cricket’s wide app­eal and saturation coverage by the media, it has been subject to violence too, as it was in March 2009, when the Sri Lankan team came under attack on their way to the Qadaffi stadium for a Test match against Pakistan. On the heels of the Mumbai terror attacks, Pakistan copped a lot of blame for the incident, and international cricket hasn’t still returned to Pakistan, doing irreparable damage to the game there.

It is, however, fair to say that in a cricketing balance sheet of good pitted against the unsavoury, the forces of goodwill has triumphed. Cricket has empowered peoples subjected to the indignity of colonialism in India, Pakistan, West Indies and South Africa, becoming a veritable statement of equality where oppressors were beaten at their own game. South Africa was for a long time boycotted by the cricket world because of its apartheid policies, and in 1992 India, led by Mohammed Azharuddin, welcomed a post-apartheid South Africa into the global cricketing fold. “It was historic because India was the first country to extend their hand to South Africa,” says More.

For all the fellow-feeling, politics does impinge on cricket. After the Pulwama attacks, India threatened to boycott its match against Pak­istan in the World Cup. This was a new spin on the state use of cricket—a bid to increase pressure and bring about political action through lateral means. Once used as a tool to foster good ties, is cricket amenable to hard-nosed diplomacy? An emphatic ans­wer, like a crisply struck cover drive, is still awaited.