On the surface, the transition was smooth, but the churning before could be an indication of greater turmoil to come 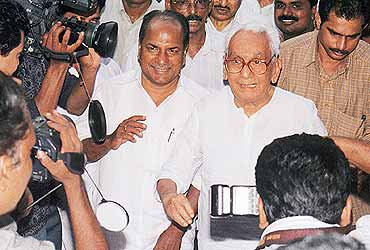 outlookindia.com
-0001-11-30T00:00:00+05:53
The Congress, which led its allies in the United Democratic Front (udf) to a massive victory in the May 10 assembly poll, surprised everybody by ensuring a smooth transition for A.K. Antony from leader of the Opposition to chief minister. Arch rival K. Karunakaran sheathed his sword for the time being and fell in line with the general mood at the Congress Legislative Party (CLP) meeting in Thiruvananthapuram that unanimously elected Antony as its leader.

In a bid to appear even-handed, the high command directed its emissary Ghulam Nabi Azad to announce the nomination of Karunakaran's son K. Muraleedharan as the new Kerala Pradesh Congress Committee (kpcc) chief shortly after Antony and his udf colleagues were sworn in on May 16 at the Raj Bhavan. Azad also made the grandiose declaration that all groups within the Congress stood dissolved and that henceforth the high command would not recognise or encourage group activity within the party.

Few doubt that this is a diktat the Congress high command will find difficult to enforce. True, the udf's overwhelming mandate in the assembly election has substantially reduced the scope for any dissident faction to destabilise the ruling coalition. The udf won 99 of the 140 seats in the assembly, where the Congress itself sits as a 62-strong contingent. The mandate had a subduing effect on Karunakaran, whose bargaining clout is considerably depleted. However, the elevation of his son as kpcc chief could result in the emergence of an extra-constitutional power centre working to undermine the chief minister in the months ahead. "We have no alternative but to work together. Everyone should realise that," Antony told Outlook, when asked about a possible outbreak of hostilities between the two factions.

Meanwhile, the cpi(m)-led Left Democratic Front (ldf) is trying to put a poker face on its rout. En route to the governor's residence to hand over his resignation as chief minister, E.K. Nayanar blamed the Left Front's defeat on a gang-up by communal forces in the state and the shifting of bjp votes to the udf kitty.

But the scale of the UDF victory shows a corrosion of the LDF votebank. While Kerala has a history of voting the incumbent government out of power, this time around the udf mandate clearly points to a swing away from the Left. According to observers, the hooch tragedy, the problems faced by farmers, the falling prices of rubber, all contributed to the electorate turning against the ldf.

The UDF likes to describe its victory as the consolidation of minority votes in its favour. The ldf has to ask itself how it managed to alienate such a broad cross-section of the electorate. Almost all the big caste and communal groupings in the state turned hostile to the CPI(m) and its allies. The UDF swept through the southern and central districts, taking many of the ldf's sitting constituencies. The Left coalition managed to hold on to its strongholds in north Kerala such as Kasargod and Kannur.

The BJP played the spoiler role to the hilt in this election. The call by party leaders to the cadres to cast a conscience vote resulted in the BJP vote shifting en masse in favour of the UDF in constituencies where the bjp had fielded no candidates. As a result, the party's voteshare has plummeted in this poll. The party leadership seems to have opted to remove the CPI(m) from power at the cost of its own performance presumably because that would level the killing fields in Kannur and possibly bring about a let-up in the CPI(m)-Sangh parivar clashes.

Soon after its defeat at the hustings, the ldf vacated the corridors of power without leaving an alternative arrangement in place. Routine administration broke down. In his first day in office, with none of the portfolios having been allocated, Antony was besieged by anxious bureaucrats bearing files. He was also greeted by an empty exchequer.

Much is expected of Antony, which puts considerable pressure on him. While he has a reputation of being Mr Clean, he will have to prove his mettle and fulfil some of his poll promises. The udf has promised better governance. Antony will have to put together a team which will deliver.