Spirit Of The Times 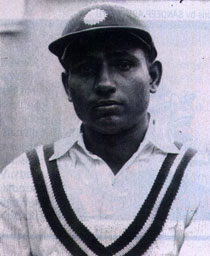 The score was 21 for 2 when 38-year old Indian captain CK Nayudu strode to the crease to join 22-year-old debutant Lala Amarnath. This was only India's second Test match, the first in India, and England, led by Douglas Jardine, were heading for an innings victory, still 198 in front as India's second innings seemed set to unravel. Legend has it that Nayudu whispered something in Amarnath's ear as the partnership began. Normally, a captain would tell a debutant in a situation like this to be patient, forego his strokes, just hang in there. Not this captain. Not this debutant.

In a dazzling counterattack that would make Adam Gilchrist seem a plodder, Amarnath took the momentum - and the breath - away. An imperious driver of the ball on either side of the wicket, he savaged anything pitched up, and was equally comfortable on the backfoot, cutting and pulling with an ease that befuddled the Englishmen. Using his feet to throw left-armer Hedley Verity -one of the greats of the game - off his length, rocking back to hook left arm fast bowler Nobby Clark (a shot Lala's son, Mohinder, inherited), he marauded his way to 83 in just an hour and 18 minutes. The initiative seized, Nayudu had a chat with him again, and Amarnath slowed down to reach his hundred in his 117th minute at the crease, in what would today be less than a session of play. He eventually finished on 118, after adding 186 runs with Nayudu.

Typical of India ever since, Amarnath's individual brilliance came in a lost cause; England won by nine wickets. Equally sadly, India's first century was to be Amarnath's last, as his career was blighted by a mixture of politics and circumstance. But in those two hours at the crease, Amarnath had asserted that India was fazed by no one, that it would play the game on its own terms. In this, he symbolised the spirit of the times.

Of Sixes And Pride