Barring those glorious uncertainties, a duel between Lightning Lee and a rampant Sachin will provide the grand finale to this Cup. 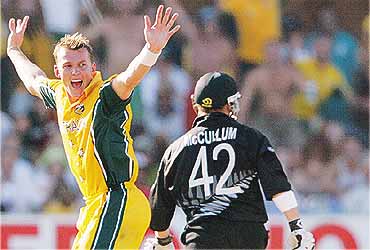 Kenya's win against Zimbabwe assures them a place in the semi-finals against an in-form India. Everybody has been talking about the India-Australia final, and while cricket has often thrown up surprises, I think it would be safe to assume that the defending champions will take on India at the Wanderers next Sunday.

Plenty has been said about the resurgent Indians and their batting mainstay Tendulkar. I think Brett Lee holds the key to Australia's chances of defeating India. He has been bowling superbly, and seems to be getting better with every game. What has impressed me about him is that he has finally found a way to maintain his pace without losing accuracy. Indians have never looked forward to facing genuine pace bowlers, and most of them would struggle against Lee. Sehwag has been a little iffy against raw pace, while Ganguly has always been all at sea against pacemen, right through his career. This is why the fate of the game hinges on how Tendulkar will play Lee. That face-off might decide who lifts the Cup. Another player who might be crucial to the fate of the game is Dravid. He has the technique, patience and courage to take on quality pace bowling. Basically, Tendulkar must fire if India are to emerge champions.

Once Lee, McGrath and Bichel are seen off, India get into the fourth and fifth bowler, but that is easier said than done. Will India go through the 15 overs without losing more than one wicket? No team has done that as yet. Moreover, Brad Hogg has improved out of sight as a bowler. Last year this time, he was an innocuous part-time bowler, known more for his batting. Can Hogg hold his nerve against the Indians, the world's best players of spin? Nobody has attacked him so far in the tournament, and it'll be interesting to see whether he is able to hold his nerve if the Indians launch into him.