Spared Of The Final Solution

Thank God, or should I say, Man, that India did not elect a Maximum Leader. One Bush in America is bad enough. 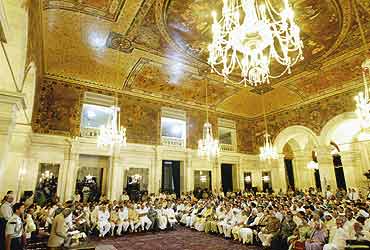 outlookindia.com
-0001-11-30T00:00:00+0553
I am a God-fearing atheist. This oxymoron has relevance here because it has as much to do with theology as it has to do with politics. I believe in Nature’s wisdom, not in "God’s" mercy. Yet at the end of each year, at Diwali, at Id, at Rosh Hashanah, Christmas, I perform genuflections to God, a ritualistic gesture born from superstition rather than faith, in which I thank the First Cause of All Things for sparing India and the world a final descent into hell on the brink of which we seem to teeter perilously: natural disasters, Bush in Iraq, schoolchildren murdered in Russia, the televised slitting of hostages’ throats, the human wreckage in Gujarat.... Dante’s Inferno beckons.

But I still find time to offer thanks. With incorrigible stubbornness. Every moment that India pulls back from its habitual forays into barbarism and butchery is a moment for which to be grateful—grateful for the flourishes of man’s mercy, compassion and common sense that prevent us from sinking into a new abyss created neither by God nor the Devil but by man’s own ambition, greed, hatred and prejudice.

Bucky Fuller once said that if you look into a kaleidoscope and are able to master the art of concentrating on a few crystals rather than being mesmerised by all the changing explosions of snowflake images, you might indeed be able to see the world in a grain of sand. The crystals fly fast and furious but in the kaleidoscopic footprints they leave on my mind’s eye, there are discernibly bold tracks about the meaning of India 2004.

As a historian, journalist and an author, I dread most of all the peddlers of totalitarian ‘solutions’ like those influenced by 19th-century humanism who created monstrous states whose leaders made a religion of killing humanity to produce a "greater good". In India, even after more than 50 years of Independence, we still face a Minorities Question. We are all minorities in one way or another, by language, upbringing, caste, class, wealth, religion, beliefs. We fight, we kill each other, we bomb our cities with RDX explosives, but, thank god, we have not voted in a dictator with a Final Solution driven by a millennial strategy.

Or we would all have been nicely, neatly, ethnically cleansed giving rise to the birth of thousands of Bosnias in our land. Nadhezda Mandelstam, in Hope Against Hope, has observed that the primary target of brutes, dictators and fascists is the intelligentsia which is first marked for destruction and then replaced by a phony state-ponsored "intelligentsia" composed of apologists and university-educated propagandists. India’s experiments with the Emergency, the various press censorship bills, the Ayodhya campaign, state-sponsored riots, fake encounters are not in the league of officially organised horror campaigns of the magnitude of Pol Pot’s forced marches, Mao’s Cultural Revolution, the concentration camps and gulags for the Jews, the persecution of the Palestinians. But they are indications of how vulnerable India is to the danger of the soul-destroying jackboot. But somehow, the keepers of the flame of humanity—ordinary people from darkened corners, with or without the intelligentsia—have ensured that the flame does not go out.

The flame did not go out in 2004. As the year dawned, it appeared that the engineers of the "vertical divide" in India—the Ashok Singhals and the saffron Brown Shirts—were well on their way to their millennial destination. Following the assembly polls in Gujarat, preceded by a savagery unparalleled anywhere since Partition, it appeared India had finally perfected a blueprint for the Final Solution, and even consecrated a new Maximum Leader—Narendra Modi—to implement it. The nation did not shudder. In fact, the media even coined an abominable political euphemism to describe this phenomenon—’Modification’. A demagogue, Muslim-baiter, cultural censor, a man who played by no rules and was even able to bludgeon the ‘secular’ parties into ideological submission, was hailed as a worthy successor to Vajpayee.

We watched in helpless horror as the nation seemed to lurch into an implacable right-wing journey. At the end of 2003, there seemed little to give thanks for. And when 2004 arrived, it was with trepidation that I looked ahead to what I could ritually genuflect about on Diwali and Id and Rosh Hashanah and Christmas. Pollsters were making dire predictions about a Landslide Right Wing Victory. But as the year wore on, the blessings began to come in trickles. Strange are the ways of Man (may He be blessed!). The pollsters’ gleeful prognostications never came to pass. The forces set to storm India’s citadels of liberalism and humanity were defeated not by God’s mercy but by Man’s ethics.

No, I am NOT celebrating here the defeat of the BJP as a political party. I am only too aware of the communal hypocrisy that runs riot even in the Congress. I do believe that the BJP’s arguments about "pseudo-secularism" need robust public debate. I am giving thanks that a movement based on hatred, violence and scapegoatism, and run by street thugs, cowards, rapists, arsonists and baby killers, which was using an Indian party, the BJP in this case, as its standard-bearer—a movement that can only be described as hard-core fascism—was derailed and sent to the backburner of the Indian political stove.

In my view, Election 2004 was about Gujarat. The Feelgood Factor, the economy, foreign policy, Sonia Gandhi’s foreign origin were surface issues. Hardly anybody campaigned overtly about Gujarat. But the core issue was what kind of nation, society and people we want to be. Whether we have a moral and ethical core belief, no matter what the colours of our politicians’ flags. Whether we have a moral compass. And India spoke with the voice of humanity and reason. These twisting and twirling tornados of hatred and violence were put back into their genie bottle. That was my Feelgood Factor. And it felt even better when a humble Sikh, a shy, withdrawn technocrat, the quintessential anti-politician, became prime minister and began to lower temperatures everywhere. In a wonderfully innovative phrase, a tradesman in Uttar Pradesh said he admired Manmohan Singh "because of his shoutlessness". With Manmohan Singh, politics is less loud. It is less shrill. It does not scream down our throats. And barring her hardcore detractors, which Indian did not Feel Good about Sonia Gandhi turning down the post of PM? No matter how politically motivated her move, it was a powerful antidote to the post-Nehruvian Congress Culture in which renunciation and humility were ever sacrificed at the altar of naked power. 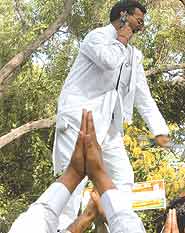 I am not celebrating here the fact of the Congress coming to power. I am serenading what appear to be the first straws in a new Indian wind with Bob Dylan’s song: "The times, they are a’ changin’...." Consider these small miracles: a Muslim is our President. A Sikh is our prime minister who has committed his party to take a pledge that communal carnage will not be tolerated. An Italian-born Christian woman, who has braved personal tragedy, vituperative public scorn and abuse, has stuck to her Indian ground and remained president of India’s Grand Old Party. Yes, where else but in India? It is a celebration of ecleticism in a nation whose core strength is drawn from its eclectic bones.

There’s another crystal in the kaleidoscope. Cricket. Javed Miandad’s famous sixer in Sharjah had reduced this game to a war of hatred between India and Pakistan in which the balls between the wickets and to the boundaries flew like nukes powered by Prithvis and Ghoris and Ghaznis. And what happens in 2004 when the Indian team tours Pakistan? Indian flags fly in Lahore and Karachi and Peshawar. And India applauds new heroes—Muslim youths Mohammed Kaif and Irfan Pathan and Zaheer Khan. So, at least for the time being, the rumour that India’s Muslims offer secret prayers in mosques whenever Pakistan won is given a long-delayed burial.

What people put together, not even the worst of politicians cannot easily rent asunder. And surely the goodwill of cricket entered the spirit of Kashmir. Dr Singh may have received a 21-bomb salute when he went to Srinagar but his was an act of courage and compassion. Even Pervez Musharraf, the architect of Kargil, the wily general who had gone into a geopolitical sulk near the Taj Mahal only a few years ago, seemed to be moving towards a bolder direction of peace in Kashmir notwithstanding the pressure from Pakistani fundamentalists. And if 2003 started with India and Pakistan playing nuclear brinkmanship, 2004 ended with Dr Singh’s offer of a troop reduction in Kashmir.

How can one end without Bush? He may be in the White House again, but his detractors take comfort in the fact that half the American voters are with Kerry. And so long as there is a vibrant and dynamic liberal conscience in America, Bush ain’t about to take over the world—not yet. Just as in India where, thanks to a reservoir of solid common sense, goodwill and compassion, no dictators of social conscience and political correctness, no thought policemen were able to parade freedom-loving Indians into forced marches, re-education camps or impose any Final Solution in 2004. For this, I offer thanks to the dearly departed year—and to Man’s mercy and compassion.

Unlock The Doors Of Despair