The Bt-cotton technology can go the DDT way—resistant bollworms. It's effect on other insects and crops isn't known either. 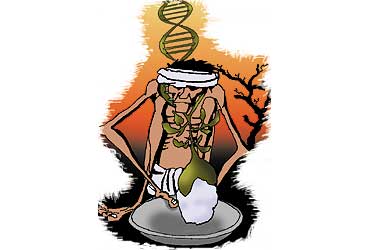 outlookindia.com
-0001-11-30T00:00:00+0553
When the first-ever genetically engineered crop variety was given approval in India a few weeks ago, it raised a predictable storm. The Genetic Engineering Approval Committee (GEAC) approved three genetically modified (GM) varieties of Bt cotton belonging to Mahyco-Monsanto with certain conditions. First, Bt cotton will have to be grown with an insect refuge of 20 per cent non-Bt cotton. The farmer has to set aside about 20 per cent of his acreage for non-Bt cotton so that the bollworm pest can feed partly on non-poisonous, normal cotton and remain susceptible to the Bt toxin. Otherwise, like mosquitoes which developed resistance to DDT, the bollworm will quickly become immune to Bt toxin and the crop will fail. The mandatory 20 per cent refuge places these varieties out of the small farmer's reach. The GEAC acknowledges this and says the varieties are not recommended for them.

The GEAC's second condition is that Mahyco-Monsanto will monitor its own variety to assess possible negative impact on the environment; like the development of resistance in the bollworm, and its effect on untargeted insects and crops. And in this, there's not even a pretence at objectivity. In what must be a first in the world, monitoring and regulation of a GM crop has been entrusted to the very same company which is producing and selling it! Is it realistic to expect that the company will be reporting negative data?

The Bt-cotton technology was essentially developed for the well-off cotton growers in the US, a temperate country where only 2 per cent of the population is engaged in agriculture and everyone has huge land-holdings. Besides, insurance and credit availability are non-issues there and agricultural subsidies are so huge that farmers can very easily afford to risk experimenting with new technologies. Even if the entire cotton crop were to fail, the American farmer is not going to be driven to the edge.

In India, the cotton belt falls in a hot and dry region which, for the most part, is non-irrigated, depending only on rains. Average land-holdings are small, farmers are generally poor and there are neither effective crop insurance schemes nor access to loans and credit. Bt cotton is unlikely to work for more than a few years in India because it is fundamentally at odds with the agricultural and climatic conditions here. Bollworms are likely to develop resistance quite fast, making the variety useless in a few years.

In the US, with average land-holdings of several thousand acres, wasting 20 per cent of the acreage—even more if needed—is not an issue. Pesticide use can also be reduced, because there is only one main pest, the bollworm, which is taken care of by the Bt toxin. In India, where 80 per cent of the farmers have small land-holdings, the economics of Bt cotton can't work after setting aside 20 per cent of the land as insect refuge. That apart, the Bt approach alone is unlikely to succeed. There are many kinds of cotton pests in India apart from the bollworm. The use of pesticides will have to continue because Bt toxin will have no effect on these other pests. It's unlikely that the Bt strategy alone will be effective in controlling intense pest attacks common in the tropics.

I was travelling through some villages in the cotton belt of Maharashtra recently, and interaction with farmers brought certain crucial economic details to light—the expenditure on seeds is Rs 800 per acre (two pouches costing Rs 400 each) and pesticide-spraying costs another

Rs 1,000 per acre, taking the total outlay per acre to Rs 1,800. The average cotton yields are around three quintals per acre in this region. Now let us look at the economics of the Mahyco-Monsanto Bt varieties. These seeds are to be priced at Rs 1,600 per pouch.So, the cost of seeds will go up to Rs 3,200 per acre. If pesticide use is reduced by half because of Bt toxin, the cost of pesticide cost will go down to Rs 500 per acre.

But the promise of bumper yields is unlikely to materialise because Bt cotton has not been bred to confer a yield advantage. Its benefit is only in terms of disease resistance. So, Mahyco-Monsanto's Bt cotton is very unfavourable for the farmer. A total outlay of Rs 3,700 (Rs 3,200 for seeds + Rs 500 for pesticide) as against Rs 1,800 per acre in the old system.

In the Gujarat-Maharashtra cotton belt, farmers are reporting that due to heavy pest attacks this last season, when they were cultivating Bt cotton—illegally supplied by Navbharat—they had to resort to frequent pesticide-spraying. Monsanto itself has reportedly been spraying its experimental plots several times in a season. The same farmers report no significant yield differences between Bt and non-Bt cotton. Add to this the increased cost of the expensive Bt seed and the non-productive refuge, which is 20 per cent of the land-holding, and you don't have to be a genius to figure out that Bt cotton is not economically viable.

There is anger at the lies and hypocrisy of the scientific and administrative establishment, which used the small farmer to promote Monsanto's varieties, saying these would be crucial in helping the impoverished farmers driven to suicides. The GEAC knew all along, as did everyone who understands the technology, that this Bt cotton cannot work for most of the cotton belt and it certainly won't work for small farmers who form the bulk of the cultivators. The government is in the dock. It should be made to explain to the public who is pushing Monsanto's technology in this way. Which lobby is railroading India's GM policy?

(The author, who has been a researcher-teacher in Genetics at the universities of Chicago and Heidelberg, is the convenor of Gene Campaign, an advocacy group on biological resources and intellectual property rights.)