Sound Is An Image

This gadget has gone from select luxury to mass necessity in no time. Only to get charged with ever newer paradoxes. 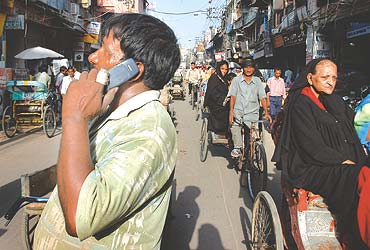 A large number of the people who own a mobile in India today are probably those who have never had a phone of their own before. For most of them, the mobile phone is their first intimate connection with telephony. It does not sit, like the old bakelite telephones used to, on something that could almost be called an altar—in homes, shops or offices, often placed under protective lock and key. Instead, it travels in pockets where it forms suggestive bulges, or is flashed out of handbags like an alluring accessory. It sings, it emits light, it spies, is spied upon, takes pictures and writes poetry. It offers everything from sage advice to pornography. It is a node in a social network, a diary, a music machine, a shop, a gambler's addiction, a confessional and a betrayer. It gleams down at us from illuminated billboards on flyovers. It drives the plot line of the latest movie, changes the course of a cricket match, and transforms political fortunes. Nowadays, we even measure our days and nights, as well as our meagre incomes, by 'talk time'.

Before the '90s of the last century, the telephone god was a remote and formidable deity. It took seven years to bring a phone home, ten minutes to get to a phone (perhaps to a neighbourhood phone booth) and five minutes (or more, depending on the state of the exchange) to get through to the person you wanted to speak to. It never took long to hang up. There is no reason to look back on those decades of disconnect with anything remotely resembling nostalgia, if anything it should prompt us to look at our own more 'connected' time with care and acuity.

The recent global mobile phone boom is directly linked to the wars that have devastated Central Africa, which holds the largest reserves of coltan, a mineral used in the manufacture of mobile phones and laptop computers. The reason why this becomes vital to think about is the fact that some of the companies involved in the mobile phone boom that is currently under way in India have been named by human rights groups and UN investigating agencies as having directly benefited from Central African coltan wars. A mobile phone isn't just a device a politician uses to talk to his paramour, it isn't just the cool new gadget that lets you play a hundred tunes or snap your dog's pictures—it's generalised usage within information-hungry societies such as ours, a provocation for thinking about many things that one doesn't automatically associate with the ephemera of phone calls. These can include the political economy of technology, ownership and monopoly issues, the tragic reality of distant and enduring wars as well as the uncomfortable proximity of surveillance.

Amongst the things that the mobile phone made possible in India was a dramatic increase in all sorts of formal as well as informal surveillance processes. Phone tapping had always lurked as a tool of political control, but the mobile phone made telephonic surveillance far more generalised than it had ever been before. The unsuccessful prosecution case against S.A.R. Geelani in the December 13 Parliament attack case was entirely based on the manipulation of transcripts and translations of illegal mobile phone interceptions made by the Delhi Police. If one reads the court records carefully, it becomes apparent that the police and other investigating agencies (and their personnel) routinely resort to mobile phone surveillance, with the collusion of the phone companies, for all sorts of reasons that range from the flippant and the banal (a little 'freelance' detective work on the side to satisfy suspicious husbands about the call records of their wives) to the paranoic and the bizarre (generally to do with the chimera otherwise known as 'national security'). The mobile's promise of an unhindered liberty of conversation between ordinary people is shadowed by the lengthening shadow of the nosy-nanny state. 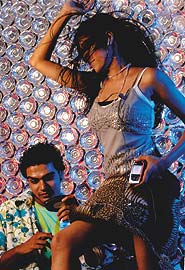 In fact, thinking about the mobile phone opens up a series of contemporary paradoxes. The mobile phone in Indian cities sits across a strange intersection, where decades of artificially and arbitrarily maintained telephone scarcity meet a new consumerist hysteria, where anxieties about privacy meet new public intimacies. We see it advertised both as a status symbol as well as a basic need. It becomes a measure that protects young single women in the city who now travel freely after dark knowing that they can always call for help if harassed or attacked, as well as a means with which men attack and violate women by circulating images taken with mobile phone cameras without prior consent.

The mobile phone and its increasingly ubiquitous presence in our lives demand that we think carefully not only about the information that politicians share with each other on their mobiles but also about the politics of information itself. This becomes necessary because our intimate conversations are no longer protected from scrutiny, because our images can travel from hand to hand without our consent and because our sense of privacy is constantly violated by the unwelcome attention of the tele-marketeer, the phone spammer and the phone stalker. In these circumstances, the very political question of who has the authority to speak, and who has the power to listen in on what gets said, becomes the very personal question of what happens when you take a call on your mobile. Think carefully the next time you hear an annoying or pleasing ringtone, or the next time your caller ID flashes on someone else's phone. Do you want to take, or make, this call?

(Sengupta is Fellow at the Sarai Programme of CSDs, Delhi.)

The Spiral Of Reason