All is not well at the Anil Ambani group. The 2G scam apart, it’s stop-start with most forays 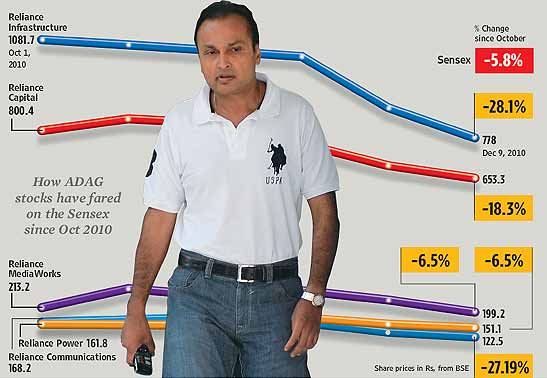 Storms In The Seawind

There’s always some unstated motive behind idle chatter. Late last month, the buzz in Mumbai centred around two parties hosted on the same day. Mukesh Ambani was entertaining cherry-picked guests at his new 27-floor mansion on Altamount Road. Barely a few kilometres away, at  ‘Sea Wind’, the multi-storeyed Ambani family home of decades, younger brother Anil Ambani was hosting a parallel party. While Mukesh at least had a high-rise reason to celebrate, there were plenty of snide remarks about Anil’s motives. In the last few months, little has gone in Anil’s favour; his businesses are marked with controversies and financial problems. Which is why this gossip is also a telling pointer to the rising—and declining—stars of the mover-and-shaker.

Even if one assumes that the Ambani brothers’ spat is (papered) over and done with, Anil Ambani’s Reliance ADAG is going through a particularly rough patch. His companies have come in for some special—and harsh—mentions in the CAG report on the 2G scam. While talk about Anil’s manipulation of government policies have been doing the rounds, they came into limelight with the Radia tapes, published by Outlook last month. Anil is a clear subject of discussion, be it on telecom, gas or coal. In one tape, Niira Radia tells lobbyist Suhel Seth: “Anil fixed the EGOM to get diversion of coal.” In other chats, Radia talks about how Reliance ADAG manipulates journalists, does not let files move at SEBI, and also refers to manipulation of stocks like Unitech to benefit Reliance Capital.

All this sordid stuff, coupled with fears of a backlash from the 2G scam, is not going down well with the market. Almost all his group companies have lost steadily over the past three months; a majority has under-performed the Sensex. A few months after Anil lost the KG basin gas supply case in the Supreme Court, investors are asking tough questions about the financial health and liability of flagship companies like Reliance Communications (RComm), and expressing concern that none of his other big projects has broken ground.

“Their entire credibility depends on executing the UMPPs in hand on time and without cost overruns.”
Shashikant Hegde, ProjectsToday

The perception seems to be that Anil has not created a formidable presence in any industry. Reliance Power is battling rival Tatas on numerous fronts, from supply and distribution to regulatory issues. While Anil has almost a score of infrastructure projects in the kitty, ranging from power generation to distribution, roads and Metro rail, most of his big-ticket plans are just on paper (such as power projects targeted to produce 37,000 MW or the banking arm of Reliance Capital that he plans). Reliance Big Entertainment is yet to make a mark of any significance. Outlook’s questionnaire to Reliance ADAG remained unanswered at the time of going to print.

Behind all this is a distancing in political circles and among his peer group. Politically, his earlier proximity to the Samajwadi Party—which made him an  MP in the Rajya Sabha—has alienated him from the Congress and the BJP. Even after resigning his seat and moving away from the SP and Amar Singh, Anil has not been able to build bridges with the major parties. Politically, at least, it seems he is heard and respected but not seen as a major game-changer—unlike the elder brother. Now, in the wake of the 2G scam, Anil has become even more of a political hot potato.

Talk to his business rivals and they are full of praise for Anil’s entrepreneurial skills. But his flamboyant and maverick ways have alienated him from a vast swathe of peers, who privately decry his manoeuvering the system. One example that comes up often is Anil getting a government decision in his favour to use surplus coal from the captive mine allocated for the proposed 4,000 MW Sasan ultra mega power project (UMPP), something even the mighty Tatas could not manage. Says a close observer of corporate matters: “He’s now seen as an outsider by mainstream corporate India.”

The absence of friends becomes crucial if one sees the allegations levelled against Anil’s companies in the CAG report on the 2G scam. It has raised questions about his holding in Swan Telecom, one of the new licencees that sold out to Etisalat. The CAG has also questioned the manner in which the telecom ministry under discredited minister A. Raja allowed some operators to offer dual technology (GSM and CDMA). If the clearance is found to be faulty under the ongoing probe, RComm could be in serious trouble as it is the biggest beneficiary. Going by the government’s current intentions and mood, it may even stand to lose its licence.

On the Swan case, if it is proved that Reliance ADAG had more than 10 per cent holding in Swan Telecom on the day of application for licence, R-ADAG may be held guilty and prosecuted. The CAG report states that r-ADAG had 10.71 per cent holding in Swan on the day. It does not help that there are many links (e-mails, employees) between RComm and Swan. RComm, however, refutes the charges, saying the CAG arrived at the figure by adding preferential equity, which was not really allowed, and it actually had only under 10 per cent equity in the company, a status permitted under the rules. Adding to RComm’s woes is regulator trai, which has recently looked at real subscribers vis-a-vis the numbers declared by operators. TRAI stated that RComm has only 68 per cent active subscribers in the CDMA segment and 66 per cent in GSM—this effectively means that some of the subscriber data provided by the company might not be true.

In any case, the situation at RComm isn’t encouraging. Despite having the second largest market share in the telecom sector after Bharti Airtel, company finances are precariously poised, with its debt burden mounting to unmanageable levels. Says Bhavesh Gandhi, AVP research, India Infoline, “From the point of view of finances and operations, it is among the weakest companies in the telecom sector compared to companies like Idea and Bharti. Mounting debt is its biggest concern.” An attempt to reduce RComm’s debt burden by merging its tower business Reliance Infratel with GTL Infrastructure fell through in June. Post the 3G auction, RComm’s debt burden has mounted to around Rs 38,000 crore. It is also fairly established that RComm is desperate to sell 26 per cent equity to raise funds, but that too has not fructified.

In infrastructure, Anil has bigger concerns. His ambition to get gas supplies from his brother’s exploration block at less than half the market price ended with the SC verdict where it lost out. To use the gas, he has to get power projects off the ground. That’s going to take years. Having bagged three of the four UMPPS (each of 4,000 MW) awarded so far, Reliance Infrastructure now faces the challenge of proving its capability to execute them. “Now project execution is the challenge...the delays (in project execution) are not significant enough to draw mega conclusions,” states Vinayak Chatterjee, chairman, Feedback Ventures.

What goes against Anil is the fact that barring setting up one 600 MW unit of the Rosa power project in Uttar Pradesh and undertaking EPC projects like the 600 MW plant in Hisar, the company has not executed a single big-ticket project so far. Instead, delays have been reported on most fronts. “Their entire credibility depends on whether they are able to execute the UMPPS in hand within the time schedule and without cost overruns,” emphasises Shashikant Hegde, CEO of ProjectsToday, which tracks infrastructure projects across the country.

What Anil may be banking on is, perhaps, the fact that umpp projects are financially sound, being backed by 25-year power purchase agreements with multiple state governments—that’s something overseas equipment suppliers like Shanghai Electric and GE saw to before providing Rs 54,000-crore suppliers’ credit even as Indian financiers refused to oblige any further. Meanwhile, his most prestigious and visible infrastructure project, the Mumbai Metro, seems to be having funding and scheduling issues. The company created for the execution of the project, Mumbai Metro One Ltd, is suffering from a high attrition rate and funds flow issues. Though project work is on, it’s behind schedule.

Anil’s foray into the entertainment sector too is yet to pay big dividends. In the last few years, the group has been making acquisitions at a rapid pace and announcing tie-ups with Steven Spielberg’s Dreamworks, CBS and BBC Earth. Not much has happened beyond that, though. The only ones working well are Reliance Mediaworks and Synergy, although critical development work and creative projects have yet to come into their fold. His DTH venture, Reliance Big TV, which was the first to offer latest technologies, is yet to bring home the goods. Says media and entertainment analyst Vanita Kohli Khandekar: “Over the last 10 years, we have seen them do precious little beyond big announcements. The cbs deal is a lot of noise.”

The silver lining is that many of Anil’s projects, like the UMPPS, have future potential. But that may not be good enough for investors, who are now wary of the long gestation periods. It doesn’t help that the group is finding it difficult to attract good talent. “They have serious issues of attracting talent. You can see it in the quality of the senior team in all of his businesses,” says a senior headhunter. As the 2G spotlight intensifies, Anil is going to need all the talent—and luck—he can find on his side.

By Arindam Mukherjee with Lola Nayar and Smruti Koppikar