Demoralised, defunct, doomed, the pundits proclaimed. But the Congress laughs all the way to Parliament. Updates 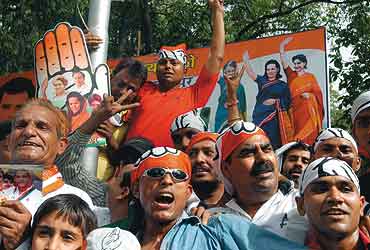 Leading from the front

September 23, 2003: The first leader to call on a stroke-hit, forgotten Kanshi Ram in hospital

Since December 27, Sonia logged approximately 60,000 km—with over 60 rallies and roadshows ('Sonia jan sampark abhiyan'). Her routes ran through pockets where anti-incumbency against Congress was at its worst.

Highlight of roadshows: Repeatedly stopped the motorcade to make personal gestures. For example, in Bhadohi, UP, she lifted and kissed a child, and went inside houses in Palampur, Himachal, to inquire about problems.

Unlike the NDA's phalanx , she virtually campaigned for Congress single-handedly.