Some 252 food shows are now on air. India has quite a TV appetite. 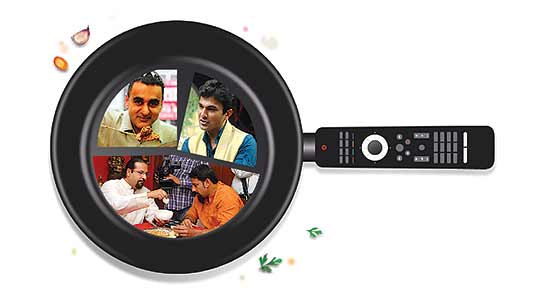 What’s On The Table

The story of Amritsar boy Vikas Khanna, who learnt to wield the ladle from his grandmother when he was barely into his teens, and then made it big as a Michelin-starred chef, is the stuff of delicious television drama. As the new face of Masterchef India 2, which went on air just a few weeks ago, the New-York based Khanna replaces Bollywood star Akshay Kumar on the show. For Khanna, this is his “happy journey back home”; for culinary shows on Indian TV, it’s a big moment. His arrival adds new energy to a segment that’s already gathering steam on air. These are times when everyone’s a “foodie”, food porn is trendy, and foodism has never seemed more sexy. We may have reached a kind of saturation point as far as music and dance reality shows go, but for culinary shows on Indian television, it’s sizzle time.

At last count, there were 252 food shows on air across channels. Nearly 50 new shows have been added this year alone, according to TAM ratings, including on regional, news and foreign channels. Most shows are taking a stab at standing out in the crowd: while the breezy Highway on my Plate attempts a rustic dhaba trail, hosted by the affable duo Rocky and Mayur, Masterchef India takes the dramatic route and tries to emulate the aura of its Australian counterpart. What’s also in vogue is the food-cum-travel format, like the travelogue-style Twist of Taste with Vineet Bhatia. Earlier this year, veteran chef and one of the first food show icons Sanjeev Kapoor launched his 24-hour food channel, FoodFood, that he says will focus on specialised shows like low-cal cooking or baking techniques. It all comes riding on a much-hyped food wave, observes author and food critic Rashmi Uday Singh, which the gargantuan buffet of food shows is merely a part of. “Some of the shows currently on air are recycled leftovers, but there’s some great stuff, too. There’s something for everyone. Even so, we are only at the beginning of a trend which has to settle down.” A surprising lot of activity for a niche sector, but not entirely out of place in India, where food is not only amazingly diverse but is an emotion, an epic in itself. The trps for food shows are nowhere near prime-time soaps but Masterchef India has come close to some of them, averaging a healthy 2.85 on TAM ratings.

“Food is the new form of entertainment. Do you remember a time when celebrating an occasion meant calling relatives over? Nowadays, it’s just assumed that a celebration means dining out,” says Kapoor. Sure, that has been part of the build-up, with a quickly growing dining business that thrives on well-travelled Indians. Naturally, television’s keeping pace, mirroring the growing food obsession. “What you see on the small screen is a reflection of society. Exposure to foreign cookery shows like Nigella’s Kitchen has sparked off a change. There is a drive to innovate, matched by availability of foreign ingredients,” chips in Monica Shergill, senior creative director, Star Plus. On many levels, culinary shows are gradually breaking new ground, getting smarter and savvier. There is a rush to experiment with cuisines, reject the tikka-tandoori stereotyping of culinary shows and break out of the standard table-top format and, in a sense, rely less on celebrity star power, more on real-life top chefs. 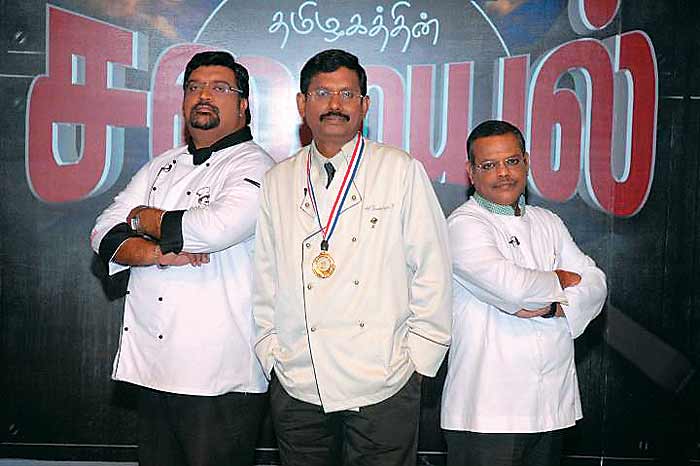 No doubt, cookery shows are no more seen as entertainment only for bored housewives. If you think you can cook, there could be no better time than now to shout out with your recipe, though you would have to do better than kachche gosht ki biriyani or butter chicken. On the month-old Masterchef Australia-style Tamil culinary reality show Thamizhagathin Samayal Champion on Jaya TV, for example, the more offbeat your recipe, the better. “There were so many Khana Khazana type of shows out there,” points out Prakash G.V., creative head at Jaya Network, “we wanted to pitch our show differently. We were not looking for contestants who could churn out the same old sambar and vadai. We’re interested in new cuisines and unique recipes. This has created such excitement among viewers, they are already asking us about the second season of the show.” Exclusivity, in fact, is quickly emerging as a big selling point. For instance, there’s an all-vegetarian cookery show called Vicky Goes Veg; a single cuisine show, Italian Khana, with Ritu Dalmia (NDTV Good Times); and the upcoming Mummy ka Magic (FoodFood Channel), targeted at young moms.

At the same time, there is a lot more spontaneity to these shows than before. “We are moving away from the old-fashioned and highly boring stand-behind-the-stove, add-one-spoon-of-this, one-spoon-of-that format,” points out chef and restaurateur Ritu Dalmia, who will soon appear on a new food show, Travelling Diva. A no-script-policy is also becoming popular. “We don’t do two takes, we don’t follow a script, just an outline,” says Rocky, the co-host of Highway on my Plate. Pitches in Twist of Taste host and chef Vineet Bhatia, “My show does not call for any rulebooks, but instead draws inspiration from the surroundings, from people and events, local cultures and flavours. It encourages viewers to keep an open mind about food and play with the presentation of the food.” There’s plenty happening on niche foreign channels as well—half of TLC’s (Travel and Living Channel) top shows, in fact, are centred on food, including Nigella’s Kitchen, Anthony Bourdain’s No Reservations and Gordon Ramsay’s Hell’s Kitchen. Fox History and Traveller’s David Rocco’s Dolce Vita, meanwhile, has got itself quite a following in the metros.

“We weren’t looking for the same sambar-vadai. We want new cuisines, unique recipes. That created the buzz....”

“When we started out, food programming was an untapped territory in India. But now, Indian food shows have an edge over the foreign ones because of the relatability factor. Plus, we know so little about our own food, there is so much to discover in Indian cuisine,” says Monica Narula, NDTV Good Times producer for food shows. Curiosity about little-known local flavours, as well as of ‘global cuisine’—in particular Korean, Italian, French, Japanese cuisine—is what’s driving this market. Cashing in on this burgeoning interest are a host of food-related companies sponsoring the shows. The audience, too, has changed. “Fifty per cent of my viewers today are male,” says Kapoor, “and lots of kids watch my shows as well.” It’s also a generation that is looking at the profession of being a chef more seriously. But in an increasingly crowded segment, what works? Chhanda Guha, former host of Bengali cookery show Harir Khabar and producer at Tara Network, believes “what sells today is fusion food, stuff that’s easy to cook and healthy. Little things like keeping a calorie meter while demonstrating recipes go a long way in hooking a viewer.” Ultimately, what draws viewers—even those who don’t cook—to a cookery show, or even to cookbooks, for that matter, is capitalising on the vicarious pleasure of visualising food, feels Rashmi Uday Singh.

The jury is still out on whether Indian television shows are making the most of the moment. “What we need is better production and television hosts who are related to food and yet are camera-friendly,” suggests Ritu Dalmia. Food specialist Karen Anand reckons foreign culinary shows are far slicker because a lot more money is pumped into them. “I see a huge interest in food shows in India, so there is clearly a market. So why not develop television personalities and increase budgets?” It’s early days, and there’s still plenty of the pie to go around. As Rashmi Uday Singh puts it, “I’m just glad Indian television’s alive and cooking.”

Putting Growth In Its Place