Has the politics of manipulation breached the last bastion of our secular being—the armed forces? 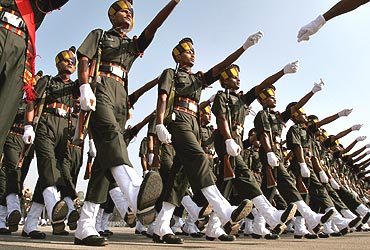 If anything has been held sacred about the Indian army so far, it has been the fact of the unalloyed patriotism and secularism of its men. That certitude stood more than a little shaken on November 4, the day a serving officer of the Indian army, Lt Col Prasad Shrikant Purohit, was caught as the alleged mastermind of the blasts in Malegaon on September 29, 2008. His arrest raised a whole mountain of questions. Is Purohit an aberration or is there more to the phenomenon? Have hardline ideologies begun to taint the thinking of the military as well? Have the politics of religion and identity—asserting itself in insidious and manifest ways—begun corroding what has hitherto been the bulwark of India’s democratic and secular values, the armed forces? Politicians have never given up trying to manipulate the defence forces, ever since India gained Independence. One need only recall the disaster that was the 1962 war, Jawaharlal Nehru’s interference and the promotion of Lt Gen B.M. Kaul over more competent officers, including Field Marshal Sam Maneckshaw.

But never did politics hold as much sway as it did during the Kargil war, when the BJP-led NDA was in power, and nationalist sentiment was at a Himalayan high. The first portent perhaps came on May 6, 1999, at the height of the Kargil war, when the then director-general of military operations, Lt Gen N.C. Vij, was ordered by the Union defence ministry to brief several MPs on the progress made by the Indian army in battle. Vij prepared a detailed presentation and, along with his counterparts in the air force and navy, made his way to an office on Ashoka Road in central Delhi. "To our horror, we discovered that this was the party office of the BJP. Left with no choice, we just briefed the BJP MPs and left hastily," says one of the three officers present at the briefing. "We complained bitterly, but no one in the defence ministry thought much of it."

The briefing was a first in Independent India’s history where senior serving chiefs were asked to brief a political party about ongoing military operations. While the incident has been debated and dissected over the years, marred by claims and counter-claims, the fact is that this was an incident that India’s steadfastly secular and apolitical military could have done without.

The same year saw the 3rd Division of the Indian army working overtime to facilitate the Sindhu yatra, an event that was planned and executed by the Dharma Yatra Sangh, an arm of the Vishwa Hindu Parishad. The then general officer commanding the division, Major General V.S. Budhwar, had brushed aside the army’s role in the function as routine. Not just that, the then defence minister George Fernandes had even co-opted Kargil sentiment, saying that the war had been fought on the banks (in the Batalik sector) of the Indus.

Years later, the then army chief, General V.P. Malik, would condemn both the events in his book Kargil: From Surprise to Victory, under a chapter suggestively titled ‘Leave Us Alone’. He denied he was in the know when the DGMO was going to BJP headquarters or when the army was being deployed for the Sindhu Yatra. Now, however, he tells Outlook, "I have always said that I took up the matter with the prime minister. It is detailed in my book."

Kargil indeed provided fertile ground for the politics of national fervour to take firm root. Scores of retired military veterans at that time found it natural to identify with the BJP’s language of nationalism, and joined the party. The BJP even created a special defence cell—to man which it roped in generals Lt Gen K.P. Candeth and Lt Gen J.F.R. Jacob—ostensibly to raise issues of strategic and military value. The politics of nationalism apart, other lesser, stray incidents over the years have shown communal and regional assertion in the military. For instance:

A disillusioned man today, there is no doubt in Bhagwat’s mind that the whole security establishment today is biased. "There is a clear majoritarian record and views in the military as well as the intelligence services," he says. He recalls briefings in the chiefs of staff committee, which were "communal and clearly biased against Muslims" and "assumed stereotypes". Bhagwat also remembers walking out of an army parade on January 15, 1996, when he was chief of the western command, and where Sena chief Bal Thackeray was among the invitees. "I, along with my air force counterpart Air Vice Marshal K.C. Cariappa, walked out in protest," he says." How could such communal politicians come to a military event? The RSS has always had an agenda right from 1947-48 to infiltrate the armed forces as well as the intelligence services and the bureaucracy."

Those arraigned on the right side of the political spectrum dispute his view. Among them is Manvendra Singh, the BJP MP from Barmer, who continues to be a territorial army officer and is therefore qualified to speak on behalf of both sides. "The orders in the army are in black and white, as is life," he says. Lt Gen Vijay Oberoi, who retired as the army vice chief under the NDA government, can’t agree more: "Right from induction, it is hammered into the officers and troops that there is no caste or religion in the army and everyone is similar." Having said that, both however stress that the BJP holds more appeal to the military because it ‘speaks’ their language. "The BJP speaks in a straightforward language which is similar to the language of the military," says Manvendra Singh. "Over the years, the BJP’s ethos has come to epitomise a commitment to an ideology that is equally clear and nationalistic." Adds Oberoi, "The language of those on the right of centre has always had greater appeal for men in uniform in most democracies. I have done a course in the United States and I saw 90 per cent of the officers were Republican." Indeed, the BJP’s views come closest to the military, avers Lt Gen N.S. Malik, convenor of the BJP’s defence cell and the son of a former Jan Sangh leader.

But all this is not to say that the army has become politicised, clarifies Manvendra Singh. "To say so is completely wrong," he asserts. "The military respects us because the NDA government achieved several things for the military that had not been done in 60 years." Adds Brig R.B. Sharma (retd), a member of the BJP’s defence cell: "We stay away from serving officers but pass on our inputs and thoughts to the BJP leadership."

VHP leader Acharya Giriraj Kishore has a slightly stronger viewpoint. "We certainly don’t want the army to be politicised," he tells Outlook. "But the army has been made lame, and in places like Kashmir the Muslims have openly showed their dislike of the army. I am not saying there is any truth in the reports about Lt Col Purohit, but there are reasons for disgruntlement in the army." The defence cell’s joint convenor, Group Capt Vijay Vir, echoes this somewhat: "I always felt that we are submissive and soft as a nation. Given our size and strength, why can’t we assert ourselves in international affairs? By conducting the nuclear tests in 1998, the NDA government proved our mettle."

Ask armymen themselves, and they’ll say they still haven’t lost their spine. The admitted policy, they’ll tell you, is to stay out of all religious disputes. Which is why, when the Shri Amarnath Shrine Board activists took to the streets in Jammu, army headquarters instructed its formation commanders not to get involved in quelling the protests. "It was a religious issue. We have already been alienated by a section of the population in the Kashmir Valley. We don’t want people in Jammu too to be alienated from the army," a senior officer told Outlook on condition of anonymity.

Army headquarters was worried, say sources, that any role in quelling the protests could adversely affect the troops since the leaders of the movement were ex-servicemen. But since they were leading a protest on religious lines, senior officers feared that the army’s role could be given a communal colour, something that was pointed out repeatedly at internal army briefings.

"It was a difficult assignment, so we had to keep out," says the officer. "But the constant involvement of the army in maintaining law and order is unhealthy. We can’t be quelling down protests by Gujjars one day and then tackle protests by Hindus in Jammu. The army has to be above it or we will lose our secular fabric."

Some believe this fabric has already been rent, with people like Purohit having little qualms about wearing their politics on their sleeves. For the moment, though, army chief Deepak Kapoor has gone on record saying that a thorough internal investigation and profiling of officers and men will be done to "weed out such elements". There’s hope yet.