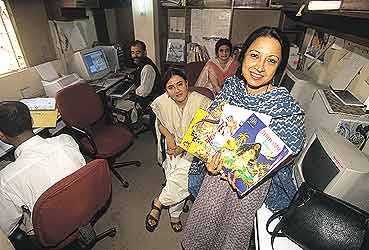 The next best thing after the proverbial story-telling grandmother, Vivalok Comics—brought out by the Viveka Foundation, a centre for alternative perspectives in Delhi—marks a paradigm shift from gods to a more subaltern terrain. The fun-filled world here is all about communities and places long lost and forgotten on the Indian map, about folk narratives, local histories, ballads, fables, songs.

Says Rukmini Sekhar, chief editor and director of the foundation, whose brainchild the comics is: "Our focus is to try and bring out the diversity of our culture, our pluralistic tradition. It is an alternative look at the polarisation, the kind of history that has been thrust upon us now. All this to enrich the child’s perspective." Adds series editor Shikha Jhingan: "Unfortunately, folklore in our country has been reduced to stock characters, like a Tenali Rama or Vikram-Betal. But there is much more to our culture and tradition. We are glorifying India’s tradition of diversity."